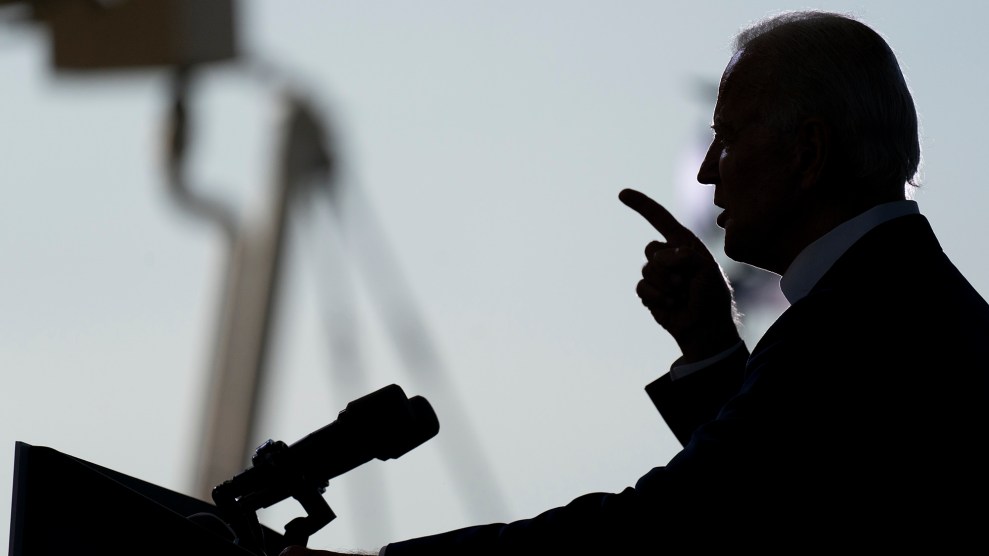 If Joe Biden prevails against Donald Trump on November 3, his victory will set in motion a massive transition operation that Biden allies have been quietly building for months. Of the more than 4,000 positions a Biden administration would need to fill, the very first will likely be a chief of staff. And while Democrats are rising above their differences to push Biden over the finish line, liberal activists are already waging a behind-the-scenes fight over Biden’s contenders for that post. If he chooses who lefties fear, they vow it would be the starting gun on a public, intraparty battle over the would-be president’s appointees.

No member of the Biden campaign or transition has made any public statements about potential high-ranking picks, but two names circulating among the DC rumor mill have set off alarm bells among Beltway progressives: Bruce Reed, who served as Biden’s chief of staff from 2011 to 2013, and Steve Ricchetti, who succeeded him. Both have been senior advisers to the former vice president’s campaign.

Many of these warnings are coming from allies of Sen. Elizabeth Warren (D-Mass.), whose mantra of “personnel is policy” informs their opposition to any appointees who give off corporate-friendly or revolving door vibes. “It would be a huge mistake for Biden to choose a longtime Pharma lobbyist or someone who led the Simpson-Bowles commission that called for Social Security cuts,” Stephanie Taylor, co-founder of the Progressive Change Campaign Committee, an organization closely allied with Warren, said in a statement, referring to Ricchetti and Reed, respectively. “That would send an opposite message from the ambitious, forward-looking agenda he has campaigned on.” Adds another Warren ally, “Nothing will have more impact on whether the party stays united or immediately fractures after the election as the question of whether he’s going to choose Steve Ricchetti or Bruce Reed.”

There’s some evidence to suggest their concern is misplaced. Biden is running on the most progressive platform of any Democratic nominee in recent history, and it was crafted in consultation with not only aides like Reed and Ricchetti, but also a wide array of voices from the party’s left wing. But activists worry that campaign platforms might just be smokescreen that would disappear once he enters the White House. “If one of them [Reed or Ricchetti] is chosen and chosen quickly, I think it will be a really strong signal to activists about the broader tenor of the administration,” David Segal, the executive director of Demand Progress, said.

Progressives reject Reed on ideological grounds. Reed led President Bill Clinton’s Domestic Policy Council and was the architect of Clinton’s 1996 welfare reform bill that ultimately deepened the hardship of impoverished Americans. He also worked closely with then-Sen. Joe Biden to craft and pass the 1994 crime bill, which is blamed for ushering in the era of mass incarceration. Reed served as policy director and later CEO for the Democratic Leadership Council, a centrist think tank that developed the ideological cornerstones of the business- and market-friendly “New Democrats.”

A year before he joined the White House as Biden’s chief of staff in 2011, he served as the staff director for the Simpson-Bowles Commission, a bipartisan team led by former Sens. Al Simpson (R-Wy.) and Erskine Bowles (D-N.C.). that studied how to balance the federal budget in the midst of the Great Recession. Its recommendations to curtail Social Security and Medicare benefits irked progressives—as did its overarching goal of reducing the deficit at a time when the stimulus spending Congress had passed was deemed insufficient to help struggling Americans.

Their complaints with Ricchetti, meanwhile, are of the revolving door variety. A fellow Clinton administration alum, Ricchetti co-founded a lobbying firm with his brother, Jeff, and represented clients such as AT&T and United Technologies. Much of the work was focused on health care: Ricchetti personally represented the American Hospital Association, a Pennsylvania subsidiary of Blue Cross Blue Shield, and drug manufacturers Eli Lilly, Novartis, and Sanofi-Aventis, according to his 2012 White House financial disclosure. His return to the White House to serve as a counselor to Biden in 2012 caused tension given President Barack Obama’s vow to ban lobbyists from serving in key White House posts until they were two years removed from their lobbying work.

Progressive activists have their backs up because chiefs of staff are key counselors, often the last stop for any major policy or political decision a president makes. During the early years of the Obama administration, President Barack Obama’s choice of then-Illinois congressman Rahm Emmanuel, a devotee of centrist Democratic thought, had been seen as a major barrier to pushing the Obama White House to the left as it navigated its response to the Great Recession. With Biden poised to take the helm of another economic crisis, progressives fear history will repeat itself.

“Either Steve Ricchetti or Bruce Reed as Chief of Staff would send a terrible signal,” says Jeff Hauser, the director of the Revolving Door Project. He is leading an effort to organize progressives around pressuring the Biden transition on its political appointments.

Of the names circulating in the rumor mill, progressives would prefer Biden choose Ron Klain, another top campaign aide who served as his first White House chief of staff and whose resume they see as less tainted than either Reed’s or Ricchetti’s. A longtime Democratic operative who also served as chief of staff to former vice president Al Gore, Klain is praised for aptly managing the White House’s implementation of the 2009 stimulus bill under Biden and the Obama administration’s 2014 ebola response.

But apart from a handful of vocal activists, these conversations are not happening in public. Several progressive activists Mother Jones reached out to would not comment on the record about either Ricchetti or Reed as potential chief of staff picks. Doing so would not only rupture the veil of unity as Election Day approaches but could also jeopardize the delicate relationships outsider activists are trying to build with a would-be new Democratic administration. So far, the Biden transition has not taken kindly to public jockeying around administration posts.

A Biden-Harris administration will be tasked with developing its own ethics guidelines if the ticket wins on November 3. But the transition team has taken steps to avoid the sorts of conflicts of interest that alarm progressives. In late September, the transition released ethics rules that bar transition staffers from working on policy issues that might present a financial conflict of interest for them: This includes matters on which they have lobbied in the past year, or will resume lobbying on once the transition is complete. It does not impose a blanket ban on lobbyists, which isn’t necessarily something the left is seeking. So far, the transition has granted a handful of exceptions to “individuals with expertise in pandemic response who recently advocated on behalf of their public interest, nonprofit employers,” a transition official told the Wall Street Journal.

A Biden transition spokesperson did not offer comment on either Reed or Ricchetti, but said that the transition team “is not making any personnel decisions pre-election.”

But the window for registering discontent is rapidly closing. If past is prologue, the chief of staff decision could be made very quickly. Barack Obama announced he’d chosen Rahm Emmanuel as his chief of staff two days after Election Day; Donald Trump selected Reince Priebus for the role five days after defeating Hillary Clinton. And unlike most of Biden’s would-be high-ranking appointees, picks to this post do not require Senate confirmation.