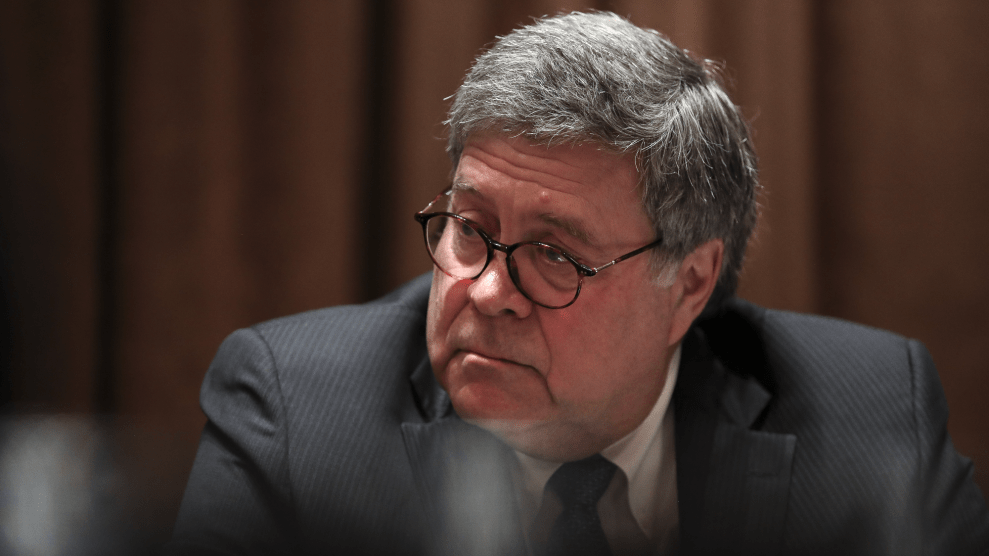 When the Justice Department recently publicized an ongoing investigation into potentially improperly discarded Trump ballots, critics accused it of violating long-standing agency policy against interfering in an election.

But the unusual decision to publicly detail the Pennsylvania case may also have run afoul of guidelines that Attorney General William Barr himself issued to federal prosecutors this year, according to a memo obtained by ProPublica.

In May, Barr wrote a directive to all Justice Department employees imploring them to be “particularly sensitive to safeguarding the Department’s reputation for fairness, neutrality, and non-partisanship” when it comes to election-related crimes.

“Partisan politics,” he wrote, “must play no role in the decisions of federal investigators or prosecutors regarding any investigations or criminal charges. Law enforcement officers and prosecutors may never select the timing of public statements (attributed or not), investigative steps, criminal charges, or any other action in any matter or case for the purpose of affecting any election, or for the purpose of giving an advantage or disadvantage to any candidate or political party.”

Nevertheless, last month Barr’s Justice Department issued a press release announcing an investigation into whether local elections officials illegally discarded nine mail-in military ballots in Pennsylvania. The announcement of an open investigation was highly unusual. Even more abnormal was that the press release specified that at least seven of those ballots were for President Donald Trump.

While the motivation of the Pennsylvania press release is unclear, Barr had personally briefed Trump on the matter before the announcement, the Washington Post subsequently reported, citing an anonymous source. The president raised it in a media interview and then DOJ’s Pennsylvania office announced the investigation.

Then, the Trump campaign quickly jumped on the Pennsylvania case to bolster those claims.

“BREAKING: FBI finds military mail-in ballots discarded in Pennsylvania. 100% of them were cast for President Trump. Democrats are trying to steal the election,” a campaign official tweeted.

“There’s absolutely no legitimate law enforcement reason I know of to mention who the ballots were cast for: They were either dealt with properly or not properly,” he said. “And if there’s no good reason, it leaves only the most likely bad reason: that the identity of the candidate was revealed for partisan political purposes.”

Some experts did not agree . Samuel Buell, a former federal prosecutor who is now a professor at Duke Law School, said Barr could argue that “any public announcement about a ballot investigation complies with [the memo] because the language is so broad.”

Barr, he said, could say the “purpose” of the Pennsylvania announcement was not to affect the outcome of the election or support a particular candidate, but some other non-prohibited motivation like “protecting the vote.”

The Barr memo closely mirrored election-year guidance that previous attorneys general sent out under both the Obama and George W. Bush administrations. Barr himself said at his Senate confirmation hearings last year that the election policies were in place because the incumbent party has “their hands on the levers of the law enforcement apparatus of the country, and you do not want it used against the opposing political party.”

Asked whether the Pennsylvania announcement ran afoul of the agency’s election policies, Justice Department spokeswoman Kerri Kupec responded: “No.” She declined to elaborate.

The U.S. attorney overseeing the case is David Freed, a former Republican nominee for Pennsylvania state attorney general who was nominated for his current role by Trump in 2017. In a publicly released letter, Freed said he was detailing initial findings despite an ongoing investigation “based on the limited amount of time before the general election and the vital public importance of these issues.”

A second memo obtained by ProPublica, issued in August by Corey Amundson, chief of the DOJ’s Public Integrity Section, was even more explicit.

In it, Amundson reiterated the Justice Department’s long-standing policy in election fraud cases: “Overt criminal investigative measures should not ordinarily be taken in matters involving alleged fraud in the manner in which votes were cast or counted until the election in question has been concluded.”

The memo was addressed to the Attorney General Advisory Committee, a group of U.S. attorneys that advise the attorney general.

The policy Amundson cites appears to make an exception for extraordinary cases. But it seems unlikely that would apply to the case in Pennsylvania. That involved only nine ballots, which appear to have been discarded by a sole contract employee. The motivation may have been an innocuous attempt to follow Pennsylvania rules barring ballots sent back without the proper envelope.

Current and former Justice Department officials told ProPublica that, even without the memos from top agency officials including Barr, the Pennsylvania press release violated long-standing department policy. They explained that prosecutors not only should not announce that they are investigating, but that they should be slow even to start an election-sensitive investigation during the campaign. Such an investigation is so sensitive, an opposing candidate could use it to smear his or her opponent.

“That’s what they drill into us: the policy of non-interference and never, ever, ever announcing an investigation,” one official said. “That’s why the thing in Pennsylvania is bonkers, completely bonkers.”

Barr has amplified Trump’s attempt to discredit mail-in voting before, claiming falsely that there is widespread fraud.