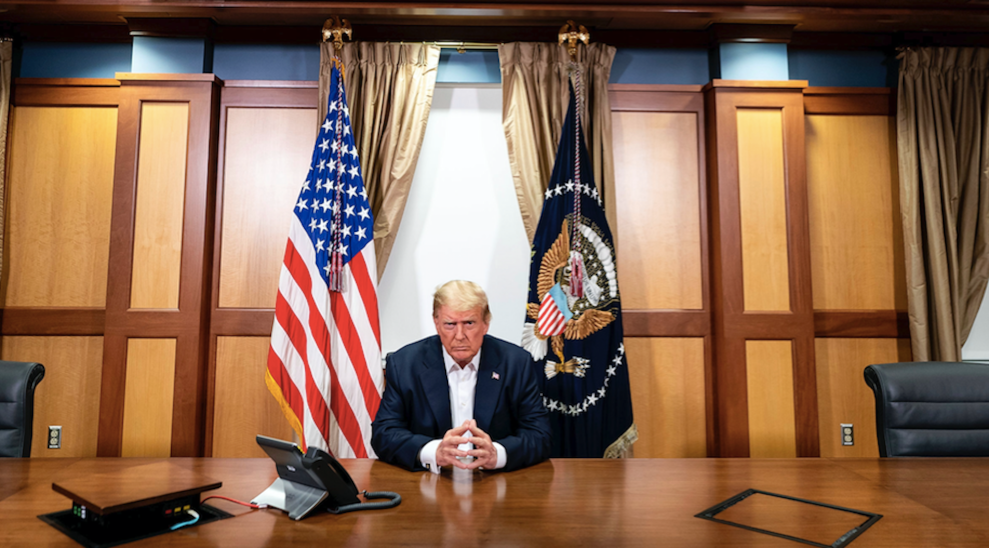 As the White House coronavirus outbreak continues to escalate—with news Monday that two housekeeping staffers and press secretary Kayleigh McEnany have tested positive—so too has the spectacular parade of irresponsible actions being taken by Donald Trump’s campaign, his Republican allies, and administration officials. Together, those actions paint a damning portrait of a party, led by a president who insists the virus “affects virtually nobody,” trampling on science and basic safety guidelines in an effort to win an election and steal a Supreme Court seat.

As Trump prepares to rush out of Walter Reed Medical Center still contagious with the virus, let’s take a look at the most reckless actions we’ve seen so far.

With three Republican senators testing positive for the coronavirus—a tally that could very well rise over the coming days—Barrett’s once sure-fire confirmation to the Supreme Court suddenly appears imperiled. Now, one of those infected senators, Sen. Ron Johnson (R-Wis.), has announced that he’ll still show up on the Senate floor in order to confirm Barrett—even if he remains contagious. “If we have to go in and vote, I’ve already told leadership, I’ll go in a moon suit,” he said.

The White House press secretary, who on Monday announced that she had tested positive for the coronavirus, declined to wear a mask while speaking to reporters on the White House North Lawn the day before, even as the number of White House officials testing positive was growing. (Two of her deputies have also tested positive.) Here she is, maskless, on Sunday:

White House Press Sec. McEnany says she won't give “a detailed readout with timestamps of every time the president's tested" for coronavirus. pic.twitter.com/jKqpseZoJC

The White House’s damning lack of transparency around the outbreak extended to Trump’s debate with Joe Biden, whose team says they were never alerted to possible exposure and did not learn about it until late Thursday night when Bloomberg revealed that Trump aide Hope Hicks had tested positive. The former vice president has since repeatedly tested negative, but that doesn’t mean he’s out of the woods quite yet.

Trump takes a joyride to greet his “patriots”

Two days into his stay at Walter Reed Medical Center, the president on Sunday emerged in a hermetically sealed Suburban SUV to wave at supporters stationed outside. As I wrote on Sunday, the surprise drive-by immediately drew fierce condemnation for needlessly putting Secret Service agents at risk.

Even though he attended the White House event likely at the center of the outbreak, the attorney general initially refused to self-quarantine. He eventually changed tune on Sunday, but, according to a Justice Department spokesperson, he still intends to be back at work later this week.

Trump campaign tries to spin his infection as a good thing

“He has experience — now — fighting the coronavirus as an individual. Those firsthand experiences, Joe Biden, he doesn’t have those." pic.twitter.com/Qk0Qc8l6q9

Even as the Trump-centered outbreak grows, the White House has reportedly refused to cooperate with local health officials who are trying to contain it. Washington, DC, Mayor Muriel Bowser on Monday revealed that her attempts to reach the White House are being ignored. The Trump campaign and Republican National Committee staff have similarly frustrated New Jersey officials who say that they haven’t received a full accounting of who attended the president’s Bedminster fundraiser on Thursday, just hours before Trump tweeted that he had tested positive.

In a tweet both sycophantic and misinformed, the Florida Republican claimed that it’s COVID-19—not Trump—that will have to do the recovering, once again downplaying the coronavirus threat.

President Trump won't have to recover from COVID.

COVID will have to recover from President Trump. #MAGA

Trump’s doctor admits to lying about the president’s condition

In a stunning admission, Trump’s physician on Sunday acknowledged that he previously concealed the fact that Trump had received oxygen treatment in order to project optimism. That apparent lie added to the confusion surrounding Trump’s condition, as well as to the serious national security concerns over whether he was fit to perform his presidential duties.

In perhaps the most irresponsible action so far, Trump on Monday announced that he’s returning to the White House, where questions over the lack of safety measures remain. “Don’t be afraid of Covid,” Trump declared, even though the disease has now killed more than 200,000 people in the United States. Now, with the election fast-approaching and his poll numbers continuing to drop, we’re all but assured of more recklessness in the days ahead.