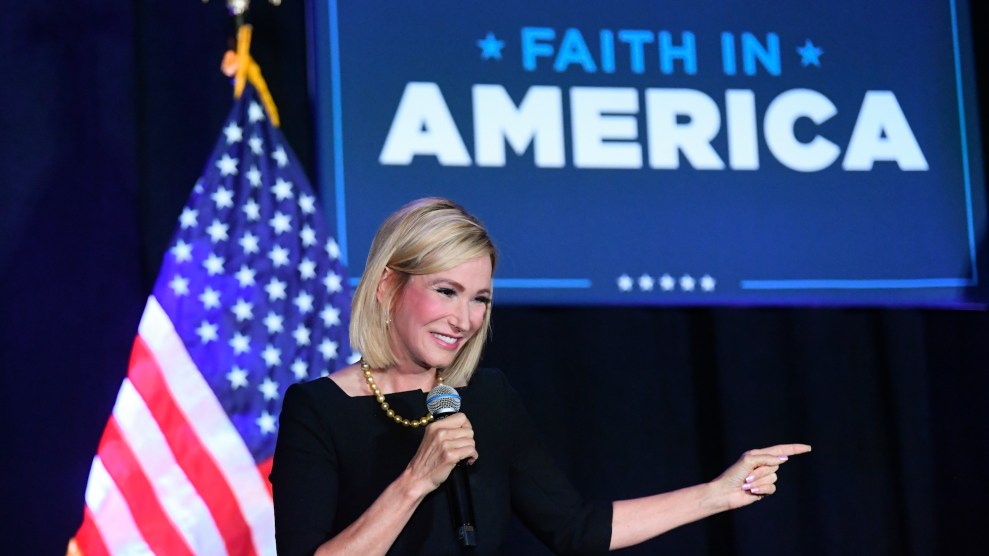 In honor of the Jewish holiday Sukkot, which starts tonight, the Israel Allies Foundation, a Christian group, released a list of “Israel’s Top 50 Christian Allies.” Number one on the list was televangelist Paula White, President Trump’s personal spiritual adviser and adviser to the White House on faith and opportunity initiatives. Upon receiving the news, White blasted out an email—and fundraising appeal—promoting her top spot on the list and including the note from the foundation’s president. “Paula White Cain and Paula White Ministries stands with Israel and the Jewish people for peace and prosperity in the Holy Land. God bless Israel!” he wrote.

White may be a pro-Israel Christian, but her relationship with real Jews is less certain, as evidenced by this video from 2007, when a fake rabbi wrapped her in a Torah scroll on her TV show.

The man wrapping White in the scroll is Ralph Messer, a Christian preacher who founded the Simchat Torah Beit Midrash and the International Center for Torah Studies in Centennial, Colorado. He refers to himself as a rabbi and is a proponent of Messianic Judaism, a religious movement of Jews who believe Jesus was the Messiah. But Messianic Jews say he’s not a rabbi at all, nor is he one of them. They have disavowed Messer for such stunts, which they think give them a bad name.

“On the face of it, it’s mishandling a sacred object. A Torah scroll is really one of the most highly valued, highly protected objects in Jewish religious practice,” says Russ Resnik, rabbinic counsel to the Union of Messianic Jewish Congregations. “Unrolling it and wrapping it around an individual just seems crazy and disrespectful. It just communicates that the person really doesn’t understand Jewish life and Jewish culture.”

“Unrolling it and wrapping it around an individual just seems crazy and disrespectful.”

Messer made headlines in 2012, when he performed a similar ceremony on the late Eddie Long, a prosperity preacher in Atlanta, Georgia, who had been accused of sexual misconduct with several young men in his congregation. Unlike the video of White, Long’s performance went viral, prompting widespread outrage. The Anti-Defamation League condemned the “fake Jewish ritual,” Resnik’s group protested, and Long eventually apologized for the ceremony, which he acknowledged had “caused harm to the Jewish community.”

Paula White, however, has never apologized for participating in this spectacle, which would have remained lost but for Seattle, Washington, resident Shirley Johnson. A religious woman, Johnson had been recording White’s TV show for years and posting snippets from it on her website, with complaints that White was twisting scripture to get people to donate to her ministry. “My calling is just to warn people that she’s a false preacher,” Johnson explained to me in an interview earlier this year.

After the outcry over Long’s ceremony, Johnson posted the video of White in the Torah scroll on her YouTube channel. In response, White hired a (now-disbarred) lawyer to demand YouTube take down the video for copyright violations. YouTube complied, but Johnson fought back, arguing that the video constituted legal fair use. YouTube restored her channel a few months later. Then in 2014, White sued Johnson for copyright infringement in federal court to try again to excise the video from the Internet.

White eventually withdrew the lawsuit, but Johnson countersued for malicious prosecution. In 2018, after a two-day bench trial in a Florida federal court, where Johnson represented herself, a judge awarded Johnson $12,500 for mental anguish and another $1,200 in economic damages against White for her bogus copyright infringement action.

Despite her efforts to bury the video of this unusual ceremony, White seems to enjoy appropriating Jewish rituals. She’s a big fan of Passover —describing it as “one of the most supernatural, miraculous seasons”—and took the opportunity this week to do some extra special personal fundraising for Paula White Ministries around the most sacred day of the Jewish calendar, Yom Kippur, or the Day of Atonement.

James 2:20 reminds us that “Faith without works is dead” – let me pray for you, send me your Day of Atonement prayer request so I can lift your name up to The Lord- https://t.co/Fm5rrYbVu0

But she doesn’t seem especially concerned about her standing with Jewish people (except perhaps Trump’s daughter Ivanka and son-in-law Jared Kushner, both Orthodox Jews). Since assuming an official government job as the White House adviser on faith and opportunity in 2019, White is supposed to handle outreach to faith communities of all sorts, not just evangelical Christians like her. But she has rarely, if ever, reached out to Jewish leaders.

Rabbi Jack Moline, president of the Interfaith Alliance, a religious freedom advocacy group, says he’s tried at least five times to secure a meeting with someone from White’s office and failed. “She is a particular kind of evangelical Christian who does not seem to understand what diversity means,” he says. So he’s not surprised that she’d participate in something as offensive as her encounter with the Torah scroll. “It was a clever stunt, wrapping her in the word of God, but the sacredness of that scroll would never permit any faithful Jew to use it in the way [Messner] did,” he says.

That said, Moline notes that the video isn’t likely to affect her standing in the White House, noting that it wasn’t so long ago that she was commanding “satanic pregnancies to miscarry” and preaching about demons. “Anybody who thinks it’s appropriate for her to be there in the first place,” he says, “is not going to be put off by this particular insensitivity on her part.”