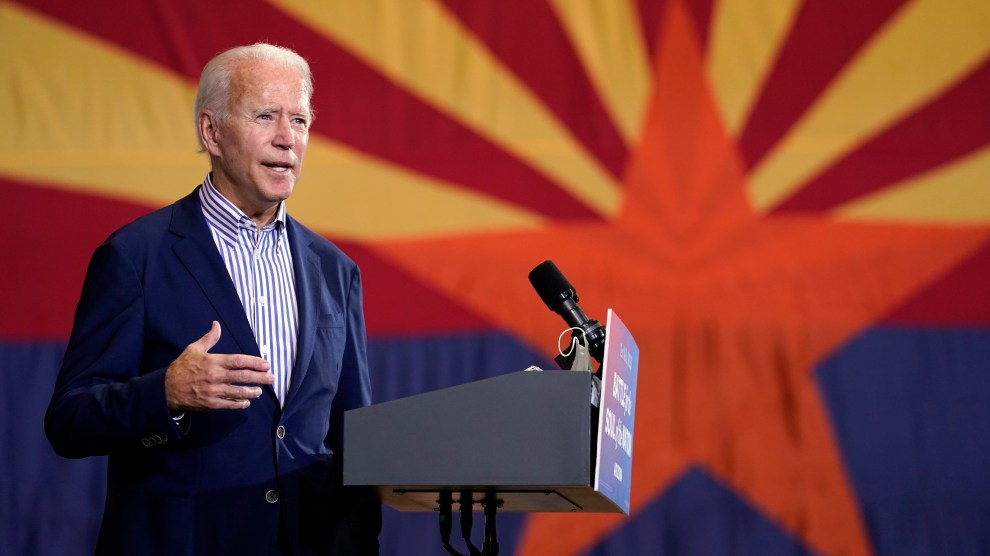 Joe Biden speaks at the Carpenters Local Union 1912 in Phoenix on Oct. 8, 2020, to kick off a small business bus tour. Carolyn Kaster/AP

For years, pundits have been tracking Arizona’s Latinx voters, saying they had the potential to tip the state blue one day. That day has finally come. Early Wednesday morning, according to the Associated Press and Fox News, Joe Biden pulled out a surprising victory on the back of a strong showing in Maricopa County—a place made notorious by the anti-immigrant, racist policies of Sheriff Joe Arpaio.

Joining Biden in the win category was Democrat Mark Kelly, the retired astronaut who’s married to former Democratic Rep. Gabby Giffords, who beat Republican Sen. Martha McSally. Kelly will join Democratic Sen. Kyrsten Sinema—meaning, for the first time since 1953, both US senators in Arizona will be Democrats.

For much of 2020, both parties saw Arizona as a key battleground state, with Phoenix being one of the hottest election ad markets in the country over the summer. Most polls had Biden and Trump in a tight race until Biden took a slight lead toward Election Day.

Just hours after the polls opened in Arizona, the national GOTV group Voto Latino sent out their early voting data, which showed a 35 percent increase in early voting for Latinos compared to 2016. The organization estimated that 70,000 new Latinx voters were expected to vote in Arizona this year, half of them young voters between the ages of 18 and 39.

Latinos make up nearly a quarter of the state’s eligible voters. As I recently wrote, Arizona’s slow leftward march is a result of a decade of grassroots work by Latinx organizers and activists—not necessarily to support the Democratic Party, but to protect their own community. A generation of Latinos was galvanized when Arizona passed SB 1070 in 2010, the extreme anti-immigration measure that would become known as the “show me your papers” law.

Organizations that are working on mobilizing Latinx voters today were formed as a response to SB 1070 and Arpaio’s harsh tactics. People changed careers to focus on pro-immigrant activism. Kids who grew up watching their parents terrorized by racial profiling and who lost family members to deportation are now old enough to vote; an estimated 100,000 Latinos became old enough to vote in Arizona just in the last two years.

Community leaders point to a decade of small gains: State Sen. Russell Pearce, the architect of SB 1070, was recalled in 2011; anti-birthright citizenship bills in the 2011 legislative session were shut down; Arpaio lost his 2016 reelection campaign; and in 2018, Arizonans elected the state’s first woman to the US Senate and the first Latina mayor of Tucson, both Democrats.

Beyond the strength of Latinx activism, the race was characterized by a major fracture within the state Republican Party. Cindy McCain, the widow of long-time Republican Sen. John McCain, endorsed Biden in September. And she didn’t just endorse Biden—she worked with the campaign and was featured in an ad. But as Politico noted last month: “The Republican Party of Arizona is no longer the one John McCain presided over. Its apparatus is solidly behind Trump, as evidenced by the rise of far-right Republican Kelli Ward from a fringe member of the party to head of the state GOP. But no one’s arguing Cindy McCain could sway Trump diehards—it’s all about independents, of which there are many.”

In the weeks leading up to Election Day, both candidates and their running mates made stops in Arizona. The Trump campaign had rallies at airports with no social distancing and very few masks in sight. Biden’s team held small events in Latinx neighborhoods and met with Native tribal leaders and small business owners.

Since 1948, Democratic presidential candidates had won Arizona only once (Bill Clinton in 1996). In 2016, Trump won Arizona by 91,000 votes, a 3.6 percent margin. Meanwhile, exit poll data from the 2020 American Election Eve Poll showed that 71 percent of Latinx voters surveyed in Arizona voted for Biden.

What was once the epicenter of racist Republican laws and white leaders who pushed anti-immigrant, anti-Mexican, and anti-Latinx policies went for candidates who ran pro-immigrant and pro-Latinx campaigns. These results are a glimpse of what Arizona’s future can be, one that thousands of Latinx grassroots organizers have been building toward—one voter at a time.