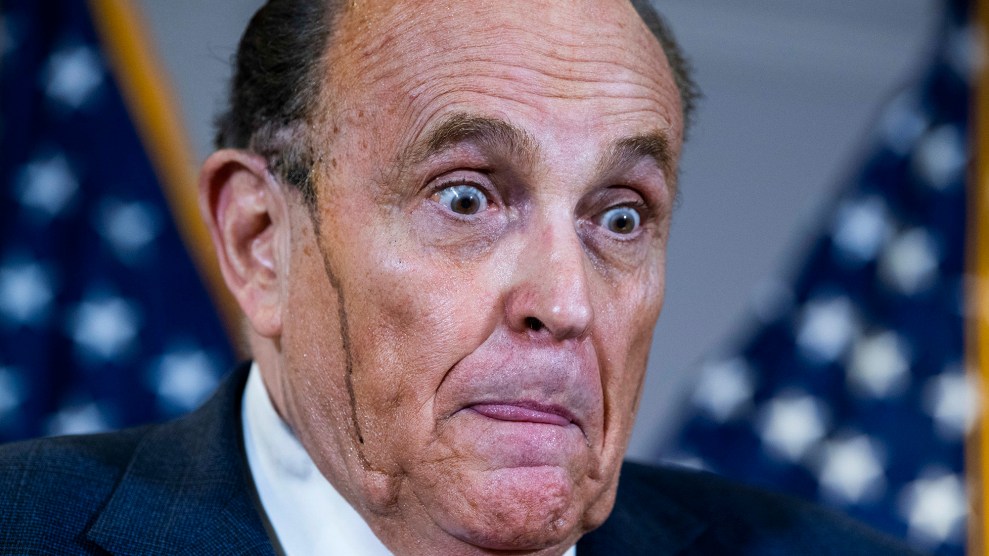 Rudy Giuliani, who is leading Trump’s legal efforts to challenge his election loss, was sweating with what appeared to be brown hair dye running down both of his cheeks as he spouted these claims at a press conference. He was joined by Sidney Powell, another Trump lawyer who has gained prominence by pushing pro-Trump conspiracy theories on behalf of her client Michael Flynn, the former national security adviser. They left few parties out of the incomprehensible plot they sketched, allegedly perpetrated by the likes of Germany, Cuba, China, leading technology and social media companies, two voting technology firms, Biden’s campaign, and local Democratic officials, especially in cities with mostly Black voters. “Globalist dictators, corporations, you name it,” Powell said. “Everybody is against us.”

This news conference was more evidence that Trump and his last ditch-defenders are attempting to subvert the results of a Democratic election in which Biden has earned 306 electoral votes and at least six million more votes than Trump. Like Trump, his attorneys asserted the president won the election but was thwarted by fraud. “President Trump won by a landslide,” Powell said, adding, “We are going to take this country back.”

The press conference followed reports Thursday that Trump had personally called two Republican members of the Board of Canvassers in Wayne County, Michigan, after they first refused to certify the results the county’s election results, then reversed those votes. After Trump’s calls, the two Republicans issued affidavits asserting they wished to rescind their certification votes. This appears to be part of a push to create arguments for Republican legislators in Michigan and other key states to refuse to certify Biden’s wins and instead appoint electors who will cast Electoral College votes for Trump. Many prominent Republicans, without endorsing this effort, are abetting it by suggesting it is part of a normal legal challenge to election results rather than an unprecedented bid by a US president to use his power to steal an election he lost.

That press conference was the most dangerous 1hr 45 minutes of television in American history. And possibly the craziest. If you don’t know what I’m talking about, you’re lucky.

Trump has been lying about the election since before it took place, laying the groundwork to undermine the results by baselessly asserting that mail-in votes allow fraud. On election night, he falsely claimed that he had prevailed, and since then he has maintained that he won even as Biden’s lead grows. But Thursday’s presser marked an escalation of his team’s claims.

Giuliani opened the press conference with a rambling 45 minutes of commentary that blended a series of conspiracy theories. He assailed Detroit and Philadelphia, both cities with large Black populations, as corrupt. “The only surprise I would have found in this is if Philadelphia hadn’t cheated,” he said. “You could say the same thing about Detroit.” Giuliani said that in Philadelphia, voters from Camden, a heavily Black and Latino city across the river in New Jersey, illegally cast votes for Biden. In Michigan, it was a truck full of ballots marked for Biden that arrived after observers thought all the Republican poll watchers had gone home, Giuliani said.

He presented no real evidence for these claims, which take advantage of a phenomenon that journalists, election officials, and experts had warned of for months: Many states would experience a “red mirage” on election night followed by a “blue shift” once all the Democratic-leaning mail-in votes were counted. The mail-ins were largely Democratic because the Democratic Party encouraged voting by mail to maintain safety during the pandemic, while Trump and many Republicans spent the fall alleging that mail voting was a source of fraud. Giuliani took this expected occurrence and turned it into a vast conspiracy about Democratic Party bosses, corruption, and, of course, the dog whistle of supposedly suspiciously large numbers of Black voters. “Each one of these cities are cities that are controlled by Democrats, which means they can get away with anything they want to do,” he claimed.

These claims are almost tame compared to the voting machine conspiracy he cited next. (Trump is reportedly “obsessed” with this bogus theory.) Giuliani left most of that explanation to Powell, a Texas appeals court attorney who has used her representation of Flynn to bolster Trump’s false claims about the origin of the Trump-Russia scandal, in the process gaining access to Trump and a spot on his legal team. Since Election Day, Powell has appeared extensively on Fox News to push an increasingly elaborate conspiracy theory: that Biden backers used a secret algorithm to switch votes compiled by electronic voting machines made by Dominion Voting Systems. Powell has said that votes may have been altered remotely from Venezuela and Germany. She suggested the CIA knows the machines are vulnerable to fraud but ignored the issue because the agency has used them itself. (Ron Watkins, an administrator of 8kun, a message board that is the main hub for the baseless QAnon conspiracy that Trump is battling a pedophile ring run by liberal elites, is a key proponent of the false claims about Dominion voting machines.)

Powell escalated her claim further Thursday. She alleged “massive influence of communist money through Venezuela, Cuba, and likely China” used for “interference with our elections.” It is not clear what she’s talking about, and she’s offered zero support for the claim. Powell claims to have affidavits from “whistleblowers” supporting some of her assertions. But she has not released any, and the only affidavit she’s specifically cited deals with alleged use by Venezuelan officials of election software made by a London-based firm, Smartmatic, to alter votes in that country.

Powell has a personal interest in advancing these claims. She’s attempting to raise “millions of dollars” for a nonprofit she says will support litigation challenging Biden’s victory, but which offers no indication so far of how much it has raised or what the money is being used for. The New York Times reported that Giuliani is seeking $20,000 per day to represent Trump. He denied he sought that much.

Jenna Ellis, another member of Trump’s legal team, berated members of the media for snapping pictures of Giuliani during the presser, presumably to note the hair dye cascading down his face. Ellis also preemptively attacked the press for focusing on that detail instead of the evidence she claimed Trump’s lawyers are marshaling. But the attorneys have offered no legitimate evidence at all for their theories. The brown liquid dripping down Giuliani’s face, in contrast, was real, evidence of a small deceit by the former New York City mayor. In that sense it may have been the most honest part of the presser.

Ellis, lecturing reporters Thursday, stated, “This matters to election integrity and matters to the future of our country.” She’s right about that.