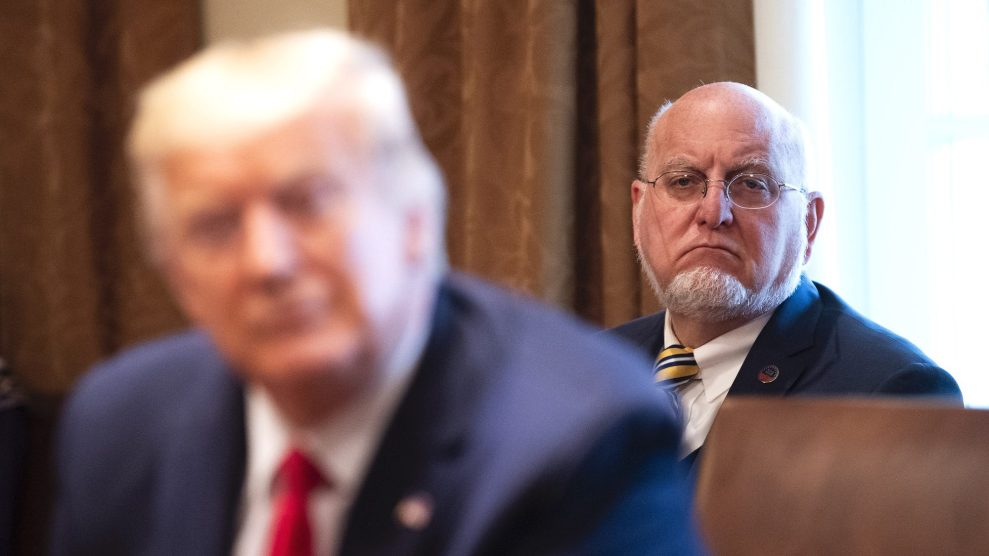 During the vice presidential debate in early October, Kamala Harris was asked if she’d take a government-approved coronavirus vaccine. If it had the blessing of public health officials, Harris offered to be the first in line. “But if Donald Trump tells us we should take it, I’m not taking it,” she said. In a sentence, Harris had affirmed her faith in the nation’s top health officials, then questioned the trustworthiness of the government.

One viewer, Robert Blair, a Brown University political science professor, was shocked. “She might be entirely right to be hesitant,” he said. “But it just shows you how far we’ve come.” Blair had worked as a data collector during the 2014–2015 Ebola outbreak in Liberia, where efforts to fight the disease were dogged by a lack of trust in government. Widespread conspiracy theories suggested the sickness was a hoax. Suddenly, it seemed like a primary symptom of Liberia’s crisis—distrust—was appearing in the United States’ own struggle.

Harris was careful to distinguish between the president and public health officials in her answer, but for much of her audience—the American people—they were indistinct. In September, a Kaiser Family Foundation poll had found that nearly one-third of Americans harbored distrust for the Centers for Disease Control and Prevention, the agency tasked with advising the public on COVID-19, having doubled since April. “They were dealt a very bad hand by the pandemic, then undermined and sidelined by the administration in terms of messaging, and then sabotaged by the administration’s incompetence,” said Dr. Tom Frieden, the CDC’s director from 2009 to 2017.

And it’s not just the CDC. Trust in the government has been in an ebb and flow of decline for the last half century, and 2020 saw the sense amongst Americans that it usually does what’s right drop to 20 percent, according to the Pew Research Center. Try running a democracy when all of its participants think it’s a sham.

“When people lack trust in the information they’re getting, they feel like there’s stuff being left out and they make up stories to fill in the gaps.”

If public institutions lose credibility to effectively plot the nation’s course, then chaos becomes the pilot. “When people lack trust in the information they’re getting, they feel like there’s stuff being left out and they make up stories to fill in the gaps,” said Dr. Ross McKinney Jr., chief scientific officer at the Association of American Medical Colleges. “Rumors and disinformation become the currency.”

So how do we revive the public’s trust in the CDC? For that, it might be helpful to look at other countries whose institutions, facing a loss of public confidence, managed to regain it.

Liberia is one model. More than 11,000 people died during the West African Ebola outbreak, but the tragedy brought its own lessons. One key to Liberia’s eventual success had been sitting in plain site: credentials—and who was wearing them. The country had recently endured a brutal civil war, and whenever a government envoy entered a community, they were viewed with suspicion. So the government shifted course. It courted grassroots leaders, asking them to deliver health guidelines rather than public health workers, and deputized them with government badges. “Local leaders were able to lend some legitimacy to the messaging the government was putting out,” Blair said. Protocols, like social distancing, were soon being more widely followed where local leaders had been courted by the government; the disease was defeated not long after.

Similarly, the US could outsource its messaging to trusted figures throughout the ecosystem of American cultural circles. “Everybody loves Dolly Parton,” Blair said. “Imagine Dolly Parton came out and made some video of all the things people could do to protect themselves…on behalf of the CDC.” (On Tuesday, it was announced that she had donated $1 million to Vanderbilt University to help develop the Moderna coronavirus vaccine.)

The CDC can also find some rehabilitation strategies from an organization that was not part of a government. In 2015, the Karolinska Institute, Sweden’s largest medical university whose professors are responsible for selecting the Nobel prizes in physiology or medicine, faced a crisis. One of its surgeons, an Italian doctor named Paolo Macchiarini, had conducted a series of experimental trachea transplants and three of the operations were at KI. By 2013, two of the three patients had died. KI discontinued trachea transplants and canned Macchiarini.

Over the next three years, the institute conducted a series of internal reviews and brought on external investigators who came up with a number of conflicting answers to the question of whether malpractice had happened on Macchiarini’s watch. In the meantime, he was rehired. In 2016, KI dismissed Macchiarini—but its handling of the problem had already caused considerable damage. By 2018, public polling found that the perception that KI had a good reputation had dropped by 50 percent. But the institute took decisive action: Various department heads resigned, the institute revised and published its internal oversight protocols, and was militantly transparent about having made a mistake. “My feeling is the only way to handle damage to trust is to take great action and to communicate openly,” says the communications director, Anna Maria Böök. “It’s always best to acknowledge your mistakes, even if it feels hard and can be devastating for individuals.” Subsequently, the same polling company found that since 2018, public trust in KI is rapidly returning to its pre-scandal levels.

“It’s always best to acknowledge your mistakes, even if it feels hard and can be devastating for individuals.”

Could any of these approaches help to return trust to the CDC? Transparency has long been a hallmark of the agency whose own guidelines emphasize its commitment to “acknowledge uncertainty” and adhere to “honesty and openness.”

“The fact [the CDC hasn’t] been allowed to do that is one of the reasons that we’re not all on the same page,” says Frieden. And getting on the same page requires unshackling itself from the executive branch and its influence. In recent months, the agency has been nearly paralyzed as the administration has politicized its messaging while diluting its scientific credibility. Meanwhile, CDC leadership has been unable to regain control and protect the institution and the scientists who work in it. In September, a former CDC head, Dr. William H. Foege, sent a letter to current director Dr. Robert Redfield calling on him to work on behalf of the American people and not the president, whom he referred to as “a bully.”

“You could, upfront, acknowledge the tragedy of responding poorly, apologize for what has happened and your role in acquiescing, set a course for how CDC would now lead the country if there was no political interference,” he wrote. Two weeks later it became clear Dr. Redfield hadn’t heeded his precursor’s advice. He signed a memo on October 6 permitting the vice president to participate in the debate with Harris after mass COVID-19 exposure in the White House—a move experts saw as motivated by politics, not safe health practices.

One of the priorities of the Biden administration will be to restore expertise to these government agencies as a way of rebuilding some trust with the American public. As Friedan notes, “They need to be able to speak directly to the American public with the subject matter experts there, that’s the key.” The president-elect has signaled that his appointees will be selected on the basis of competence rather political alliances, especially in the field of public health. In contrast, at a Nevada rally before the election, Trump told his supporters, “He’ll listen to the scientists,” as if that were a bad thing.

But part of the problem may be structural, no matter who’s the president. A functional government operates from the top down and the bottom up. A central aspect of Biden’s campaign was reassuring the voters that he would restore norms back to government, but where does one begin? “You might look at ways to insulate decision-making more,” says Max Stier, president of Partnership for Public Service, a nonprofit that advocates for effective government management. “There are not that many political appointees, but we are going to need to see a really comprehensive effort to rebuild the culture of science and of evidence-based decision making.”

For the CDC, the ability to communicate with the public and coordinate with other government agencies is essential for its mission of protecting public health. “If you don’t have trust in the government, you won’t have people that want to participate in it,” says Stier. Between 2017 and 2019, more than 1,600 scientists left the federal government. Trump’s mishandling of COVID-19 and his use of the CDC as a political cudgel rather than a public health tool led to the exodus of badly needed experts. “The scientists who are critical to this response: epidemiologists, biostatisticians, virologists. Those people, they’re in high demand,” Ezekiel Emanuel, a former Obama official and chair of the Department of Medical Ethics and Health Policy at the University of Pennsylvania, said back in March. “They’re fundamentally scientists committed to getting the truth, not whitewashing whatever they got.”

Stier says government scientists are mission-based and less interested in working for industry. “I think that you go back to the value proposition of, ‘Why the CDC?’” he says. “If you’re mission-oriented, there’s no bigger stage to operate in than the federal government, there’s nothing close. The way you rebuild your workforce is, ‘If you care about impacting the American public and you’re a doctor in the public health field, there’s nothing better.’” The pandemic may have exposed existing weaknesses to the agency that were worsened by the Trump administration. But, at the same time, Stier notes, “This is a rare moment when the value of government is obvious, seeing how connected it is to our health and welfare.”

Reaching an uncertain public, acknowledging mistakes, and normalizing autonomy aren’t a simple set of tasks, but climbing out of holes is harder than falling into them. Considering the Trump presidency threw every last government agency into this pit, the CDC isn’t alone in navigating its way back to the surface. And in some ways the path has already been laid out for it. “Losing trust is something that’s certainly happened,” Frieden said. “With a focus on transparency, that can be regained.”