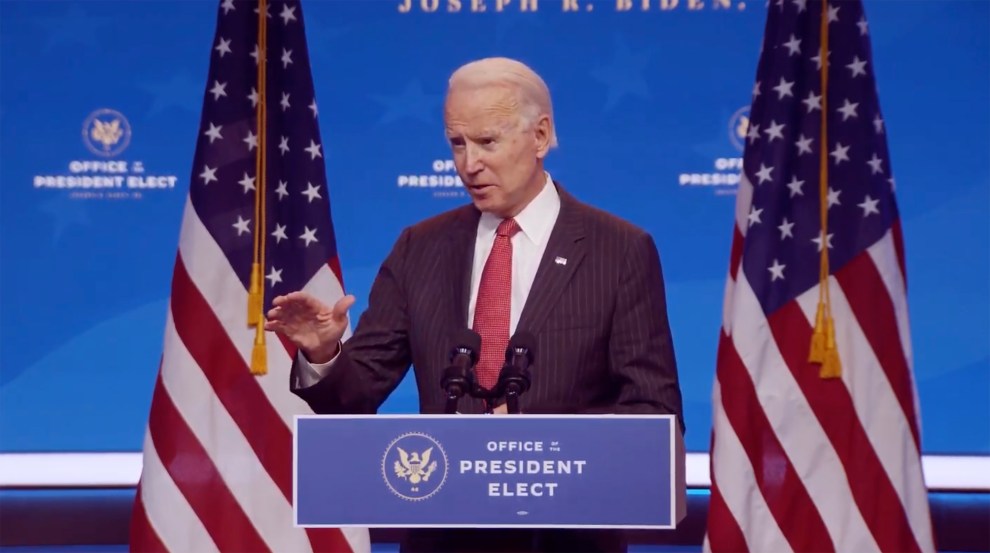 President-elect Joe Biden wanted to talk about “good-paying union jobs” after his meeting with some of the country’s top CEOs and union leaders on Monday. The Online Left wanted to talk about canceling student loan debt. And the internet discourse became real life after Biden finished his remarks, when a reporter asked Biden whether forgiving the more than $1.6 trillion in outstanding loans figured into his economic recovery plans.

“It does figure in my plan,” Biden said. He reiterated his campaign promises to strengthen the public service loan forgiveness program, make the income-based repayment program more generous, and immediately cancel $10,000 in student loan debt when he assumes office in January. “People are in trouble,” he said. “They’re having to make choices between paying loans and paying rent.”

But Biden’s ideas don’t go far enough for many Democrats, and his response on Monday renewed debate on whether he should push for more. Many want to see Biden heed a resolution introduced in September by Senate Minority Leader Sen. Chuck Schumer (D-N.Y.) and Sen. Elizabeth Warren (D-Mass.) that calls on the next president to cancel up to $50,000 in student loan debt through executive order, an idea that originated in Warren’s presidential campaign. Progressives say the pandemic and its attendant economic and racial justice crises have made the case for why these debilitating sums should be forgiven for the roughly 44 million borrowers whose debt loads would be eased.

There isn’t any question of whether Biden has the authority to forgive the loans: Trump himself used his executive authority last August to cancel debt burdens for 25,000 permanent disabled veterans. And even if a GOP-controlled Senate blocked Biden’s nominee to be Education secretary, Toby Merrill, the director of Harvard’s Project on Predatory Student Lending who did the original analysis for Warren, told me that an acting secretary should have the same authority to cancel debate. Instead of logistics, the real issue facing it is political—mainly, the party’s own will.

Polling suggests that canceling a wide swath of debt wouldn’t cause political harm for Biden. A May 2019 Quinnipiac poll found that 57 percent of voters backed canceling up to $50,000 in student loans for people who make less than $250,000 year. Progressive think tank Data for Progress found a similar result in a September 2020 survey—including support for the issue among a slight majority of Republican voters. Even so, canceling such a high amount of student debt has generally been relegated to liberal pipe dream status alongside Medicare for All and the Green New Deal. Its champions have been Warren, who proposed canceling up to $50,000 per student, and Sen. Bernie Sanders (I-Vt.) who, not to be outflanked, later promised to cancel all of it. And the COVID-19 recession that forced laid-off workers to choose between essential payments and debt burdens further highlighted one of the points Warren stressed when introducing her plan: The burden falls disproportionately on Black borrowers. A 2016 study from the Brookings Institution found that Black graduates hold on average $53,000 in student loan debt four years after graduation—an amount nearly twice as high as their white peers.

What stands in the way of Biden moving forward with the most ambitious forgiveness? It’s partially about spending priorities. It would cost at least $1 trillion to cancel the amount of debt Warren and Schumer are calling for. Biden has expressed little fear in running a federal deficit in getting the country out of financial straits, a position he reaffirmed during his remarks on Monday. But he’s already committed to ambitious economic recovery plans with big price tags to match, including $2 trillion in clean energy spending and $700 billion to boost manufacturing. Both Biden and some in his inner circle of economic advisers have concerns about the long tail of deficits among his own proposals, let alone those he hasn’t committed to yet. Biden himself made it through the primary without any student debt cancellation proposal, adopting the $10,000 cancellation proposal only after he became the presumptive nominee and within the context of the pandemic-induced recession. Ben Harris, who served as Biden’s chief economist in the White House and has been a key aide in crafting his campaign’s economic policy platform, co-wrote an op-ed in 2014 that argued “attending college is a good investment and that a significant portion of the ultimate costs can and should be borne by the student or his/her family.” Instead, he argued for greater investment at the state and local level to make higher education more affordable.

That view is shared by a number of economists with ties to the Democratic party, who have cautioned against additional federally-backed debt relief. For example, Adam Looney, an Obama administration alum and fellow at Brookings wrote an op-ed this week supporting Biden’s proposal while condemning Warren’s, calling it “wildly out of synch” with progressive policymaking since “its largest effect would be to improve the finances of college-educated workers, who have already tended to be winners in an economy marked by ever-rising inequality.” And it’s not just the wonks: The Democrat-held House included the $10,000 in immediate debt cancellation in their second COVID-19 relief bill—which passed only with Democratic support, as the House’s most moderate Democrats abstained. Democrats who challenged GOP senators this year, meanwhile, shied away from mentioning even Biden’s more modest $10,000 cancellation proposal on the trail.

Marshall Steinbaum, a left-leaning economist at the University of Utah whose research has endorsed full student debt cancellation, countered Looney’s assertion. He takes particular issue with Biden’s promise to automatically enroll students in income-based repayment programs. In Steinbaum’s analysis, that style of repayment program just solves “a liquidity problem” without tackling the underlying wealth disparities that lead students to borrow in the first place. Keeping borrowers on the hook for the sums, Steinbaum says, further hurts their ability to build wealth—an assertion bolstered by his analysis showing that more than half of borrowers have balances exceeding their original principals more than a decade out from graduation.

A coalition of more than 200 progressive groups sent a letter to the Biden-Harris transition on Wednesday calling on the president–elect to cancel student loan debt via executive order (without calling for a specific dollar figure for forgiveness), reiterating claims that doing so would provide-much needed economic stimulus in the face of a struggling economy and would help the coming administration meet its commitment to addressing the racial wealth gap. Other progressives have said they plan to use the recommendations from the Biden-Sanders unity task forces to hold Biden’s feet to the fire. Those suggestions, developed jointly between surrogates from both campaigns, prescribed forgiving up to $50,000 in student debt for those working in public service and all undergraduate student debt for those who attended two- and four-year public colleges for borrowers earning less than $125,000 a year.