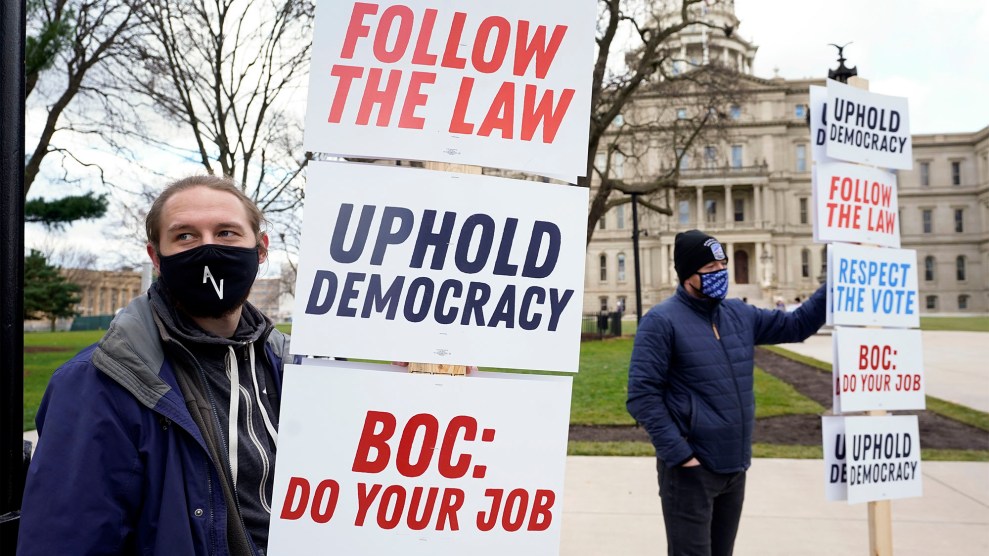 Joscha Weese, left, stands outside the Capitol building during a rally in Lansing, Mich., Saturday, Nov. 14, 2020. Michigan's elections board is scheduled to meet to certify the state's presidential election results Monday. Paul Sancya/AP

A majority of the Michigan Board of Canvassers voted on Monday to certify the state’s election results, defying pressure from President Trump and national and state Republicans to delay certification.

“We have a clear legal duty to certify the results of the election,” said Aaron Van Langevelde, who works for Michigan House Republicans and is one of two GOP members of the board. “There’s nothing in the law that gives me the authority to request an audit to delay or block certification.” While the board is purely “ministerial” under state law and is legally obligated to certify county results, the other GOP member of the board, Norm Shinkle, abstained from certifying. On Monday, two high-ranking figures from the Obama Justice Department wrote in the Detroit Free Press that voting against certification could be a felony under the Voting Rights Act’s prohibition on those who “willfully fail or refuse to tabulate, count, and report” legal votes.

The board’s move is a blow to President Trump’s latest long-shot strategy to overturn Joe Biden’s victory by seeking to delay certification in key states and create an environment where Republican state legislators appoint their own Trump electors to nullify the will of the voters. The president hosted the GOP leaders of Michigan’s legislature at the White House on Friday. He has tweeted that GOP legislatures should have “the COURAGE to do what has to be done to maintain the integrity of our Elections.”

The bid to convince GOP legislatures to overturn the will of the voters was likely bound to fail. State and local election officials—not legislatures—are in charge of certifying election results. Electors are appointed, according to state laws, based on the winner of the state popular vote. Under federal law, legislatures can only intervene if voters have “failed to make a choice.” But Michigan’s voters clearly chose Biden, where he won by 154,000 votes.

In a marathon hearing conducted by the board on Monday, local election officials from all over the state passionately testified in favor of certification. “A failure to certify these election results will send a message that democracy is dying in Michigan,” said Barb Byrum, the clerk of Ingham County.