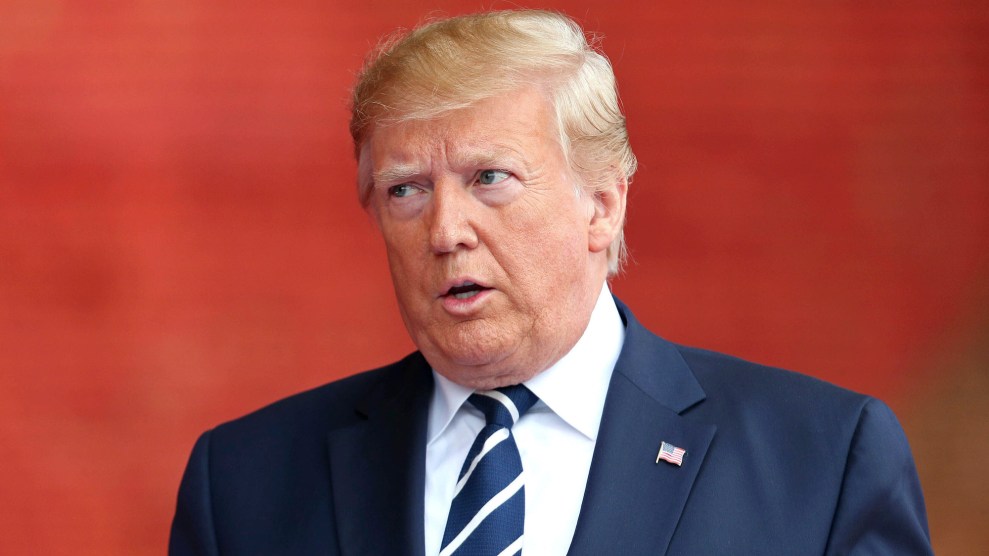 A group of members of the Scottish Parliament led by the Green Party have renewed their demand that the Scottish government invoke an anti-money laundering law to investigate President Donald Trump’s Scottish golf resorts. The request was first made last spring, but on Thursday, Patrick Harvie, a co-leader of the Scottish Green Party renewed his case in questions he directed to Scotland’s First Minister Nicolea Sturgeon.

Sturgeon, a member of the Scottish National Party, who has previously been critical of Trump—she once stated that “we laugh” at Trump’s claims about COVID-19—tried to brush off Harvie’s request. “Everybody is probably well aware of my views of the soon-to-be-former president of the United States, and my views are probably no different to Patrick Harvies’ and to many peoples’ across Scotland,” Sturgeon said, “So the idea that I would somehow try to protect him from some type of accountability in Scotland, I don’t think holds much water.”

Trump began investing in Scotland in 2006, when he purchased an old hunting estate in Aberdeenshire, along the windy northeastern Scottish coast, and began carving a golf course out of the towering sand dunes. After initially wooing locals with promises of major economic benefits, including thousands of jobs, Trump fell into a nasty feud with a number of his neighbors, and—after receiving early support from the Scottish government—Scottish leaders. Trump eventually opened the course—the construction of which damaged the environmentally-sensitive dunes—and although it has received some modest praise from golf experts for its design, it has never turned a profit. In 2014, Trump purchased the historic Turnberry golf resort, south of Glasgow, which has done better than his Aberdeenshire course but also has never turned a profit.

All told, Trump has invested north of $200 million in purchasing, developing, and funding the two courses while they bleed money—as much as $6.2 million a year. Earlier this year, Trump received approval to expand the Aberdeenshire course—adding a small village of course-side homes and a second course—an expansion that is estimated to cost another $200 million. Despite Trump’s reputation as a New York City real estate developer, those numbers arguably make Scotland his business empire’s center of gravity.

From the beginning, Trump’s investments in Scotland have seemed unusual. As the self-proclaimed “King of Debt,” Trump has built almost all of his signature projects with other people’s money. His Scottish resorts appear to be funded with his own funds—but based on personal financial disclosures he has filed as president, it’s not clear how Trump has been able to generate that much cash. The recent series of articles by the New York Times, based on copies of Trump’s tax returns, suggest that Trump has used a variety of tactics—including some legally dubious ones—to bolster his liquidity, but Harvie says there hasn’t been sufficient explanation of how Trump is paying for Aberdeenshire and Turnberry.

In an interview with Mother Jones this summer, Harvie said the lack of financial clarity and Trump’s reputation and associations with convicted money launderers like Paul Manafort, are more than sufficient reasons to demand the Scottish government take a closer look.

“This is not someone who inspires confidence in sound finances and sound business,” he said. “The fact that there are many allegations floating around that the US authorities have investigated, whether it’s in relation to Russia or his political dealings domestically—you don’t have to sniff the air very long to see there’s something that smells.”

“Whether it’s in relation to Russia or his political dealings domestically—you don’t have to sniff the air very long to see there’s something that smells.”

On Thursday, Harvie told Sturgeon that the case has only intensified, pointing to the grand jury investigation by Manhattan district attorney Cy Vance Jr.

“The cause for concern is still growing, it’s now reported that the Manhattan district attorney’s office is investigating the Trump Organization’s inflation of assets, and potential bank and insurance fraud,” he said.

Harvie and his Green Party, are asking Sturgeon to invoke a mechanism called an Unexplained Wealth Order, a relatively new tool used by the government in the United Kingdom to probe cases where the publicly available information about a prominent person doesn’t match their apparent financial situation. This can’t be used against just anybody—it’s designed to make inquiries into the finances of “politically exposed persons” suspected of money laundering. It has been invoked several times in London; for example, in the investigation of how the wife of a jailed ex–Azerbaijani government official had managed to afford a 16 million-pound shopping spree at Harrods.

Sturgeon claimed, she doesn’t have the power to call for a UWO—only prosecutors working independently can do that. However, according to some Trump critics, Sturgeon’s argument is what may not hold much water. Martyn McLaughlin, a Glasgow-based reporter for the Scotsman newspaper, took to Twitter with the following exchange to point out that the law governing UWO’s seems pretty straightforward.

For what it's worth, my understanding of the UWO process is that it's the Scottish Government that can decide to go to court, under section 396A of the Proceeds of Crime Act 2002. The legislation doesn't seem to leave much room for ambiguity: https://t.co/DKGaZCbhGu ends/

Indeed, the legislation’s first section states: “The Court of Session may, on an application made by the Scottish Ministers, make an unexplained wealth order in respect of any property if the court is satisfied that each of the requirements for the making of the order is fulfilled.”

The Trump Organization did not respond to a request for comment.