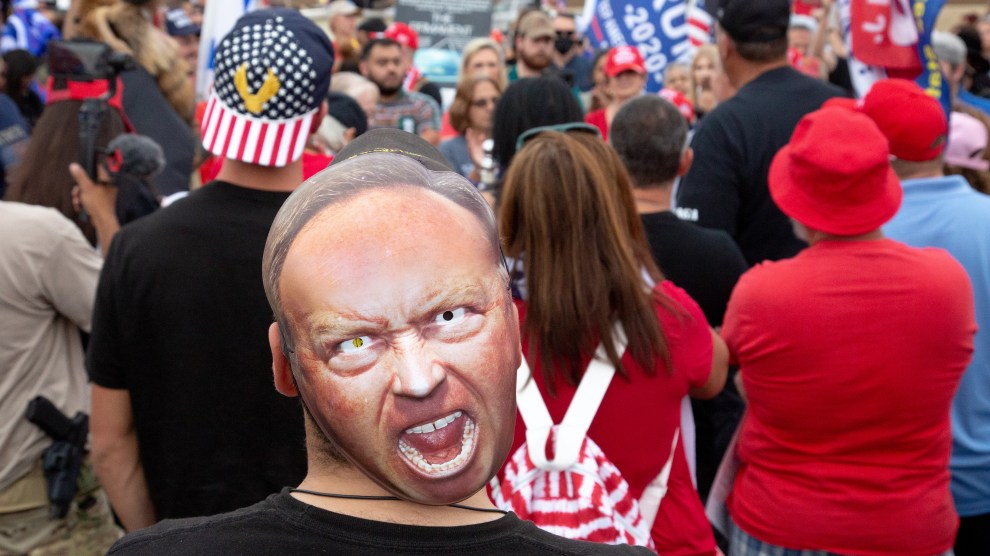 Supporters of President Donald Trump gather to protest the election results at the Maricopa County Elections Department office on November 6, 2020 in Phoenix, Arizona. The protest was organized by Turning Point Action while ballots continue to be counted in many critical battleground states.Photo by Courtney Pedroza/Getty Images

Right-wing “Stop The Count” protests that have sprung up in the last 72 hours to attempt to manipulate the vote-counting process in favor of Donald Trump appear to be at least partially artificially bolstered by paid Republican operatives. But unlike previous coordinated protests that have been revealed to be supported well-funded and organized conservative interests, the demonstrations have been organized largely by a collection of disgraced right-wing internet figures. Some have been all but discarded from mainstream Republican circles for being too extreme, too inept, or some combination of the two. Despite this, they’ve been good at one thing: figuring out how to spin never-ending mishaps into continued careers.

The protests have grown since Election Day, with FreedomWorks and Trump’s 2020 digital director getting involved in the events, according to The Guardian and Washington Post. Here’s a smattering of some of the more compelling characters involved:

After one of the first 2020 primary debates, Alexander went viral claiming that Kamala Harris wasn’t an “American Black,” because she was of Jamaican and Indian heritage, instead of descending from African-Americans who had been forced into Antebellum-era slavery. Alexander was convicted of two felonies in 2007 and 2008, and has a track record of publicly noting people for are Jewish. He made a sensationalist video with right-wing snafu generator Jacob Wohl and Laura Loomer, the Islamaphobic failed Congressional candidate, wherein Wohl seemingly fakes the group receiving death threats during filming.

Alexander appears to be involved with Stop The Steal both through his tweets promoting it and through his links to one of the websites boosting it. Stopthesteal.us’s domain is registered to Vice and Victory, a possibly defunct political consultancy he’s affiliated with. After clicking the site’s donate button, visitors are prompted with the option to donate money to one of several cryptocurrency addresses associated with Alexander, or given links to his Paypal, CashApp, and Amazon wishlist.

It’s brazen, but that’s typical for Alexander. On his website, he sells various tiers of access to himself, ranging from $25 a month, which gets you a spot on conference calls, all the way up to $250 a month which not only comes with the “raw analysis” of his “private notes,” but gave subscribers the ability to spend an extra $50 for an election night cheat sheet—a product unavailable to most lower tier users.

Despite building a large internet profile (he has over 700,000 followers on Twitter), Mike Cernovich is avoided by mainstream conservatives, potentially because of his history of advocating for various criminal acts of sexual harassment. In one now-deleted 2012 post on his blog, he encouraged his readers to “When in Doubt, Whip it Out,” in a Louis C.K. manner. Cernovich has also posted tweets that make proclamations like “date rape doesn’t exist.” In 2017 when he seemingly worked with alt-right figure Charles Johnson to boost a forged document falsely accusing Sen. Chuck Schumer (D-N.Y.) of sexual assault.

Cernovich also boosted Pizzagate, the thoroughly debunked prequel to QAnon, a conspiracy which claimed that children were being kept in the basement of a local pizza restaurant in D.C. as part a pedophile ring being run by liberal elites.

Cernovich took the chance to use the post-election period to raise his flagging profile by doing a seven-hour road trip to Arizona, where he claimed to lead a protest to “monitor the election,” from which he proceeded to film the unrest he helped aggravate. Alexander also on Twitter praised Cernovich’s trolling work in Stop The Steal protests.

Kremer, a former Tea Party organizer, has more substantial links to the Republican power apparatus, and a history of showing up to right-wing protests with heels on. The former Delta flight attendant came on the scene in 2009, and has flitted from one political action committee to another, trying to replicate the grassroots conservative heyday of the Tea party—and its money-minting fundraising appeal.

Kremer was an early Trump supporter in 2016, starting a political action committee called TrumPAC to support his insurgent campaign. The PAC ran afoul of campaign finance rules for using the name of a candidate without their permission. It was rebranded the Great America PAC, which she left after a falling out, after which she went on to join with the ex-wife of Trump adviser Roger Stone to launch yet another pro-Trump super PAC, Women Vote Trump, that pledged to raise $30 million to support Trump’s 2016 ampaign for president. The group came up $29,973,187 short of that goal, went into debt, and also got in trouble with the FEC for the unauthorized use of a candidate’s name.

Kremer’s own political career hasn’t fared much better. In 2017, she jumped into a Georgia Republican congressional primary; two months before the special election, her staff quit en masse, claiming that she couldn’t pay them.

Money problems have been a consistent theme with her efforts. In October 2018, Kremer started a new nonprofit, Women for America First—the organization formally behind www.stolenelection.us, the website emblazoned on posters at “Stop the Steal” protests. Donations through that website are directed to Kremer’s nonprofit. The group also appears to have been involved in the Stop the Steal Facebook page. Last year, the same group organized a “Stop the Coup” anti-impeachment rally in DC that might have been a much bigger affair—if the buses scheduled to bring hundreds of activists from other states had actually departed. Instead, two hours before the busses were slated to leave, the tour company cancelled the trips because Kremer’s group’s credit card had been declined.

Posobiec, who Alexander has said has a role in the protests, has also been tweeting in support of them, and personally showed up at the group’s Harrisburg, Pennsylvania demonstration.

Posbiec’s biggest claim to fame is being one of the highest-profile pushers of the Pizzagate conspiracy:

[Posobiec] once conducted a livestream “investigation” of the restaurant where the [Pizzagate] hoax pedophile ring was said to be occurring, during which he waltzed into a child’s birthday party being held in a back room. Since then, he acts as though he’s been locked in a John Wooden-esque competition with himself to outdo his greatest disinformation achievement.

Some of his most repugnant hits include trying to plant “Rape Melania” signs at an anti-Trump rally, falsely tweeting that Obama Attorney General Loretta Lynch had called for “blood in the streets,” a made-up claim that Star Wars’ Rogue One was being rewritten to include scenes calling Trump racist, and, after Republican congressman Steve Scalise was shot at baseball practice, that Bernie Sanders had told his followers to “take down” Trump.

None of rose to Pizzagate levels of fame, but not for lack effort on Posobiec’s part. He has also tweeted in support of a white nationalist conspiracy which holds that immigration and other trends are part of a secret plot to commit white genocide.

As a member of Alexander’s Twitter crew, Coudrey promoted and seemingly helped organize a Stop The Steal rally in in Las Vegas,

Coudrey used to go by “Mike Tokes” on Twitter, but has rebranded as a more serious, GOP insider. That has not stopped him from putting out a steady stream of falsehoods. Lately his disinformation has focused on the election, but he has a broader history. During the 2019 California wildfires, he pushed the claim that the damage showed something more nefarious than a simple forest fire, feeding into a larger theory about  “direct energy beams.” Earlier that year, he spread disinformation falesly claiming that Twitter had censored news of a coronavirus treatment to make Trump look bad, and made up fantastically untrue stories about Antifa disguising themselves in MAGA hats and NRA shirts to incite violence.

Since Tuesday, amid his roll in the protests he’s been busy spreading wholly unsubstantiated claims of voter fraud in Wisconsin.

Presler helped arrange the Harrisburg, Pennsylvania Stop The Steal event, but he’s best known for his 2017 “March Against Sharia,” which ended up being about Islmaphobic as the name suggested. Presler worked with Joey Gibson, leader of the violent, far-right group Patriot Prayer, on the eventually cancelled Portland edition of the event.

Since then, he hasn’t managed to make much of a splash, aside from an elaborate concern trolling campaigns in which he travels to various cities staging trash clean up events or asking” homeless people whether the government should prioritize their needs over immigrants,” as the local San Francisco publication Mission Local put it.

Stephanie Mencimer contributed to this story.