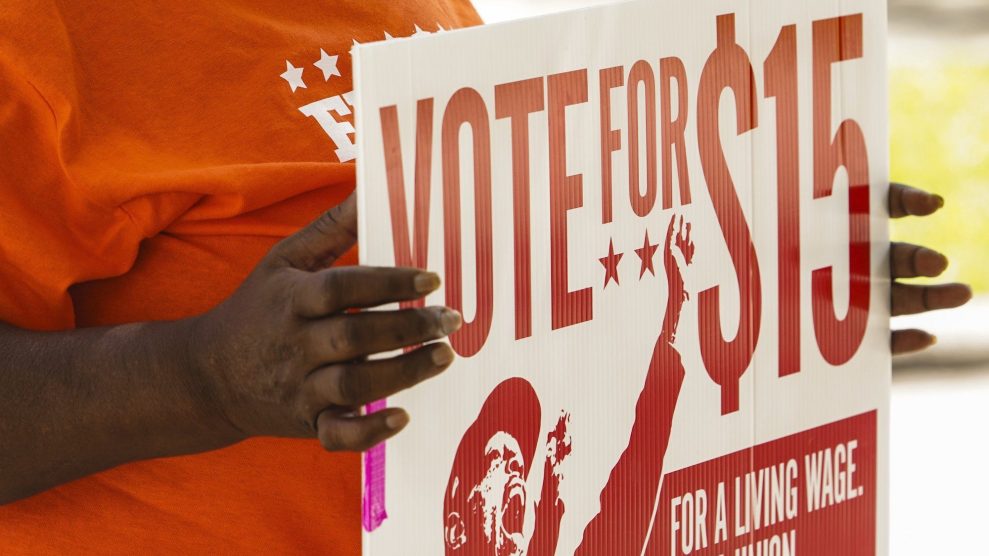 Ms. Gail Rogers, a fast food worker at McDonalds, holds a sign to advocate for increasing the minimum wage to $15.Martha Asencio Rhine/Zuma

On November 3, voters decided whether to approve a host of state-level ballot initiatives. For example, in a move that was both symbolic and practical, 70 percent of Mississippi voters opted to retire their 126 year-old Southern Cross–style state flag and replace it with a magnolia. In Wyoming, voters approved a constitutional amendment to allow municipalities to have unlimited sewer grates.

Electoral votes in battleground states that Democrats had initially hoped might be victories, like Florida, are now in President Trump’s column, and the likelihood of a majority in the Senate has all but disappeared. Even with a strong showing for Republicans, a number of progressive propositions have been successful in deep-red states. Here’s list of liberal initiatives that conservative states approved on Election Day:

Four states legalized recreational marijuana on Tuesday—Montana, South Dakota, New Jersey, and Arizona—bringing the total number of states permitting recreational weed use to 15. In Montana, where Trump easily won 56.7 percent of the vote, Initiative 190 passed with nearly 57 percent of the vote. That’s about the same percentage of California voters in favor of legalizing marijuana in 2016. Mississippi voters stopped short of legalizing marijuana but did support reclassifying possession of the drug from a felony to legal when used for medicinal purposes. A decade ago, those inroads would have been unthinkable. In 2010, only 24 percent of Republicans supported legalization; since then, the number has more than doubled to 55 percent.

In the weeks before the election, South Dakota Gov. Kristi Noem released an advertisement urging constituents not to support legalizing marijuana. “The fact is, I’ve never met someone who got smarter from smoking pot,” she said. Apparently voters weren’t that concerned about what the Republican governor thought since they passed the measure by 54 percent. Meanwhile, Trump won 61.8 percent of South Dakota’s votes.

Election Day in Florida was tense, and eventually the president enjoyed a major win. Advocates of a higher living wage also celebrated. As my colleague Hannah Levintova wrote:

On Tuesday night, voters in the Sunshine State voted to give up to 2.5 million Floridians a raise. More than 61 percent of voters approved Amendment 2, a ballot measure that will require the state to raise its hourly minimum wage to $15 by September 2026, and to enshrine that increase in the state’s constitution.

The approved increase will nearly double the state’s current minimum wage of $8.56. The increase will happen slowly, with employers being required to add one dollar a year to wages in order to work up to the $15 minimum. The first increase will bring the hourly minimum up to $10 by September 2021.

Florida is the first state in the southeastern part of the country to pass such a progressive wage hike. Much of the propulsion for the ballot measure came from personal injury lawyer John Morgan, who spent $5 million in support of it. In an interview with the Washington Post, he said, “Every great society can crumble because the haves have too much and the have-nots don’t have enough.” When the initiative passed, Florida joined seven other states that have set their sights on $15 an hour—but Florida was the only one to do so on November 3.

Arizonans passed Proposition 208, which will add a 3.5 percent income tax for residents earning more than $250,000—or married couples making more than $500,000—to bolster that state’s education fund. According to the Joint Legislative Budget Committee, which measures the financial effects of legislation, the initiative would raise more than $800 million. Ultimately, half of that money will go to increasing wages for the state’s 55,000 teachers and adding more of them to their ranks. “Big victory for students & educators in Arizona tonight!” Becky Pringle, president of the National Education Association, tweeted.

Big victory for students & educators in Arizona tonight! Arizonans voted #Yeson208 to end the teacher shortage & ensure our babies have access to counselors at school.

We salute our @ArizonaEA sisters & brothers for their tireless work in getting this measure passed! #InvestinEd https://t.co/MSilQzYugN

Utah and Nebraska voters both overwhelmingly voted to end slavery. Before these measures passed, both states made enslavement a potential punishment for committing a crime. Utah’s Amendment C and Nebraska’s Amendment 1 took that option off the table once and for all. This may not have been an obvious progressive cause in the 21st century, but it is a victory; 275,000 Nebraskans didn’t support Amendment 1.