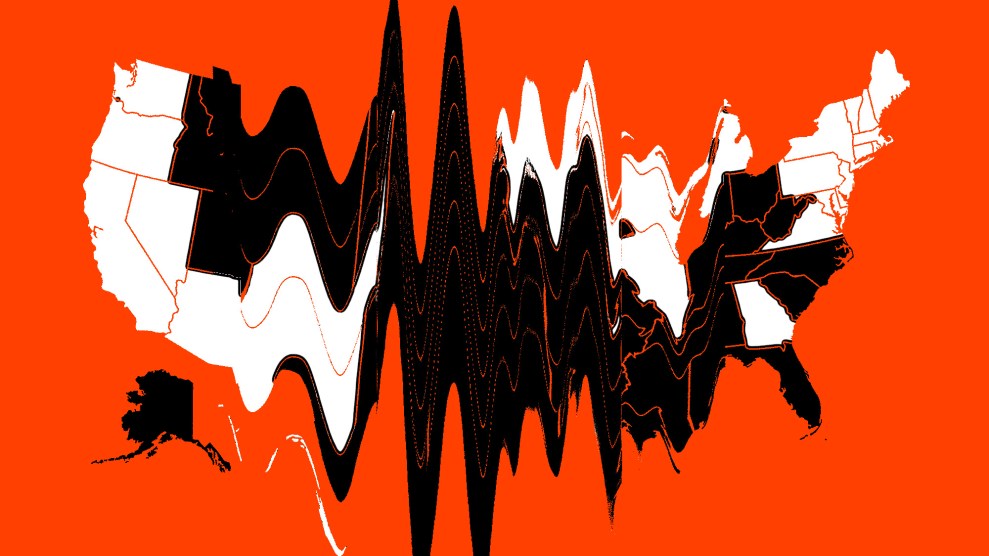 In his last superspreading rallies of the 2020 campaign, Donald Trump denounced Lady Gaga, derided Jon Bon Jovi, and decried LeBron James. At one outing, he beamed when the crowd chanted, “Fire Fauci!” He told the crowd he just might do that after the election. At another event, he voiced his support for Texas Trump supporters who had threatened a Biden campaign bus. Anger. Violence. Hatred. Ignorance. It was an appropriate synthesis of the core message of the 45th president of the United States. Not an economic agenda. Not a foreign policy plan. And certainly not a program for thwarting the still-raging pandemic and redressing the economic damage it has wrought. With 5,000 Americans dying each week from COVID-19—and medical systems in the latest hot spots being overwhelmed—Trump repeatedly mocked the media for fixating on this national emergency. “COVID, COVID, COVID, COVID,” he sneered. In this final stretch, the health and safety of Americans and the well-being of the entire country did not concern him. Instead, the former reality-TV celebrity was focused on the political cultural war he has been inflaming and relying on for over five years, for that was what Trump has always been about: fear and loathing.

And on Election Day, about half the electorate looked at a president who has been fully negligent in handling the pandemic but who gleefully slams a Black NBA star and said, “Yeah, I want more of that.” So even though on the morning after election night it appeared that former Vice President Joe Biden might squeak by with a narrow victory in the Electoral College (as Democrats failed to win the Senate), one tragic message stood clear: Trump’s politics of hate, which succeeded in 2016, remain a powerful force. Four years ago, Trump won 63 million votes (trailing Hillary Clinton by 3 million). In 2020, he has so far pocketed 66 million (2.5 million behind Biden). So after a full term of Trump fully displaying immense ineptitude and unabashed malice, he gained support among Americans. That shows the deep hole the nation has fallen into—whoever prevails in the final count and coming legal challenges.

Biden entered the race with a simple message: Hey, I’m not Trump, I’m not a bigoted, divisive, indecent, corrupt, autocrat-loving, Tweet-mad bully. I’m the Joe you know. A good guy from Scranton who gives a hoot about the working man and woman. And I can guide the country back to a degree of normalcy in which Ds and Rs might even be able to work together on our national problems. He talked about repairing the soul of the nation, but zeroed in on a big shortcut: booting Trump. As if the main problem was this one jerk, not deeper currents of inequality, prejudice, and animosity. But with the advent of the horrific pandemic earlier this year, it turned out that Trump’s obvious character flaws and psychological liabilities were more than just an affront to conventional norms and values. They had profound consequences. Trump’s narcissistic, I-know-best approach to the pandemic led to tens of thousands—perhaps more—deaths that could have been prevented and to widespread economic calamity. Trump’s dark and troubled soul was not just an embarrassment. It was killing Americans.

Consequently, Biden’s message assumed a deeper resonance. Trump’s temperament was no longer merely a question of tone. It was determining actions that endangered Americans and their nation. Initially, Biden contended that a man who praised attendees at a white supremacist rally as “very fine people” did not deserve to be president of the United States. But with the coronavirus invasion, his argument shifted to the case that this man, due to all his defects, could not do the basic job of president: protecting the citizenry. With the high death toll—far worse than most other industrialized democracies—Trump’s failure as the nation’s chief executive seemed obvious.

Yet not to his fans. And this is where the tale gets worrisome. Trump’s lethal incompetence caused tens of thousands of deaths, and millions of Americans did not care about that. They still rallied to their man. They attended or watched campaign events where Trump placed his own supporters (and others) at risk. Following the lead of their dear leader, they disregarded the science, dismissing the concerns and statements of public health experts. They denied reality; they defied rationality. They placed their trust in Trump above all else. As numerous commentators have noted, they acted like members of a cult.

These people believed Trump and all his lies. That the US economy on his watch was the greatest ever. That he was the victim of a “deep state” plot. That suburbia and its “housewives” were threatened by antifa, immigrant hordes, and BLM protesters. That he was the only thing standing between a glorious made-great America and a communist gulag. An alarming number of his devotees adopted bizarre conspiracy theories, included the idea promoted by the QAnon gang that Trump has been battling a global cabal of pedophiles and Satan worshipers. The Republican Party had for years drifted into the dark waters of conspiracy. In 2017, half of Republicans said they believed Barack Obama had been born in Kenya. But now, by latching on to Trump, they were latching on to assorted notions that depicted the media, Democrats, universities, government officials as the most nefarious actors conniving to bring down Trump and destroy the United States. They accepted—embraced—his unveiled racism and misogyny. And much of this was made possible by the right-wing media ecosystem, led by Fox News, which amplified Trump’s dishonest claims and disinformation and pumped out pro-Trump propaganda.

This election was not about which presidential candidate had a better health care plan or a more equitable tax proposal. Not about the all-important issues of climate change, education, housing. It was a civil war, with Trump leading Red State America in a crusade against the rest of the nation. This was largely how he won four years ago (with an assist from Moscow). In his four years as president, Trump did all he could to sharpen the divisions to prepare for his reelection bid. He took few steps to reach non-Trump America. During the pandemic, he refused to evince empathy or use the ongoing tragedy to call Americans together. He politicized an emergency and undermined the basic steps that had to be taken to slow the spread. He wanted this civil war.

Trump calculated that he could only triumph as the champion of one side in a bitterly fought cultural clash. That’s a highly cynical and low-minded strategy. And it has come close to working. (TBD.) Millions cheered him on. Criticism of Trump in the media only reaffirmed his standing within this tribe as their savior. His brutality, his cruelty—banning Muslims, separating immigrant children from their parents, gassing protesters—they relished it. His many hypocrisies, his steady stream of false statements, his bear-hug of murderous dictators, his inexplicable alliance with a foreign leader who attacked the United States, his shady, if not illegal, finances and conflicts of interest, his hush money payments to a porn star—none of that matters. Let alone his handling of the pandemic. For these people, Trump could do no wrong. He was not a candidate, not a president. He was a cause. Their cause.

This election, in a way, was asymmetrical warfare. Trump eagerly led an army that demonized nearly half of America. He told his troops that he wanted to vanquish the Democrats, the liberals, the radicals, the socialists. It was akin to a holy war. The country will be lost, gone, if Biden won. There was an apocalyptic tenor to Trump’s rhetoric. He wanted to inflict pain on the other side. He fantasized in public about beating up Biden. His namesake son, in one of his final campaign appearances, summarized the goal: “Let’s make liberals cry again.” Really? That’s what was important? But the zealot’s hatred that fueled Trump’s movement was real and widespread. And, yes, on the left there is a deep hatred of Trump and his clan. But Biden declined to vilify Trump and Red America in similar fashion. He promised—naively or not—to bring the nation together, should he win: “There’s gonna be no red states or blue states. Just the United States.” But what do you do when half of America does not want to be brought together?

Biden was trying to win and move on. Trump and his troops were aiming for conquest.

This battle illustrated a fundamental divide that afflicts the United States. There certainly are Trump voters who are jazzed by certain issues: abortion, small-government, low taxes. But a huge swath of the electorate drawn to him is alienated and angry and demands vengeance. This group doesn’t want a bipartisan coalition to address the issue of pre-existing conditions. It wants a racist, know-nothing S.O.B. to bust up the other side. For these folks, politics is archly us-versus-them. It is tribalized. Their tribe has a leader. And you stick with him because he is your leader.

When all the votes are counted—when recounts and legal challenges are finished—this election will not resolve the bitter conflict that has consumed the United States. The soul of the nation will not be won or healed. Trump may have to leave the White House. But the tens of millions of voters who fervently endorsed his blend of incompetence, rage, authoritarianism, and racism are not going anywhere. As hard as it was to get rid of Trump (if that is what finally transpires), it will be much harder to get rid of Trumpism. This other killer virus threatening the United States will not be easily defeated.