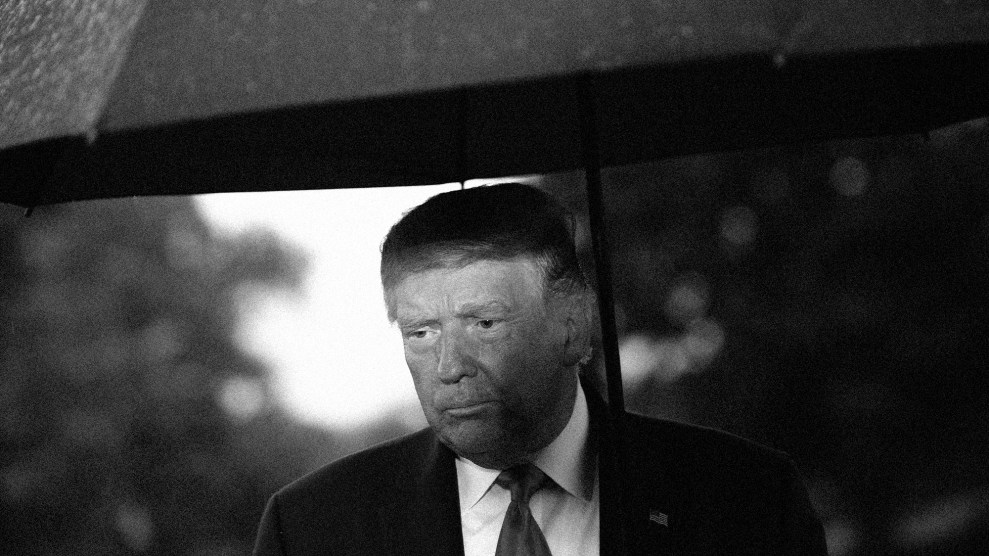 In an effort to stop officials from counting numerous votes cast in the crucial battleground state of Pennsylvania, the Trump campaign appears to have gone all-in on a brazen plan: try to sow chaos and get the courts to throw out as many remaining mail-in ballots as possible, which are likely to heavily favor Joe Biden.

With hundreds of thousands of votes yet to be counted on Wednesday, Pennsylvania, as widely predicted, was undergoing a “blue shift”: Whereas Election Day voters going to the polls initially skewed the tally Republican, making the outcome look favorable to Donald Trump, once the overwhelmingly Democratic mail-in ballots started piling up the state began shifting toward Biden’s column. As of Wednesday afternoon, Pennsylvania was in the midst of this process, with Trump’s lead shrinking and all eyes on whether mail-in votes for Biden would put him over the top.

Around 3 p.m. ET, the Trump campaign announced that the president had won the state, a false claim with the tally far from complete. Still, White House press secretary Kayleigh McEnany, Eric Trump, and others pushed the claim on Twitter. At a press conference in Philadelphia on Wednesday afternoon, Trump surrogates including former Florida Attorney General Pam Bondi, ex-Trump campaign manager Corey Lewandowski, and Trump’s personal lawyer Rudy Giuliani, claimed that Trump had won Pennsylvania and that Democrats were trying to steal it through fraud. Giuliani said, falsely, that the vote count in Philadelphia was “totally illegitimate” and declared with no evidence that the mail-in votes were fabricated by corrupt Democratic party bosses. He then claimed, without any evidence, that the Democratic Party was using fraud in other close battleground states, and vowed lawsuits were coming.

The claims about Pennsylvania were a marked departure from Wednesday morning, when the Trump campaign told reporters that they were confident they would win Pennsylvania and called for all “legal votes” to be counted. “We have confidence in Pennsylvania,” campaign manager Bill Stepien said then. But an attempt to stop the counting by Wednesday afternoon seemed to signal declining confidence in the Trump camp about Pennsylvania. Instead, a declaration of victory and an attempt to halt counting suggested that the campaign felt the need to rely on subterfuge.

The Trump campaign’s actions come as the presidential election continues to move through a critical period of uncertainty. Social media companies willingness to censor false and misleading claims, meanwhile, is being put to the test. Thus far, Twitter has affixed a label to false declarations of victory, saying “official sources may not have called the race when this was Tweeted” (a weak response that does not debunk or limit the reach of a false claim intended to disrupt the fair administration of the election). Twitter has also flagged  attempts to push disinformation and conspiracy theories around the vote, including from Trump himself.

Other moves by the Trump campaign on Wednesday included asking the US Supreme Court to throw out ballots received after Election Day, even though Pennsylvania has said it will accept ballots postmarked Tuesday that arrive by Friday.

Meanwhile, Biden held a narrow lead on Wednesday afternoon in Michigan, another state seeing a “blue shift” effect as mail-in ballots were counted—and where the Trump campaign has asked a judge to halt counting and set aside some already-counted mail-in ballots.

New: Trump campaign court docs in Michigan are in — they present ex. of one election inspector who says he was denied access, and ask the judge to stop absentee ballot counting until there's access.

Pro-Trump protesters gathered in Detroit outside the TCF Center where votes were being counted to demand that the vote-counting stop.

For a second an argument about abortion broke out, but then the Trump supporters refocused and began the stop-the-count chant again: pic.twitter.com/IltgSVvcW8

It remains to be seen what impact these schemes from the Trump campaign and its supporters might have on the election outcome.