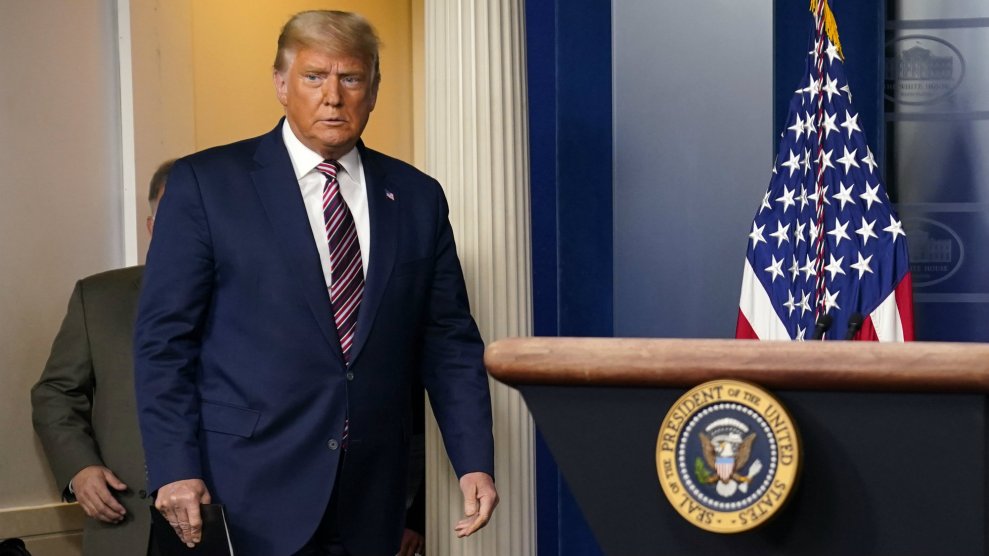 On Saturday, when the major media outlets called the presidential election for Joe Biden, millions of people around the country took to the streets to celebrate. But as people popped champagne bottles, danced alongside their neighbors, and cried tears of joy, the question of what comes next loomed ominously. Even though (barring the unlikely event that Republican efforts to baselessly claim widespread fraud succeed) Donald Trump will be a one-term president, one thing is certain: The election may have been a referendum on Trump, but with more than 70 million votes in his favor, it was clearly not a referendum on the deep injustices that define large portions of the United States.

But first, now that he has been defeated, let’s take one last look (promise!) at Trump’s history of racism. In the 1970s, the Department of Justice—that he would corrupt 50 years later—sued Trump for refusing to rent to Black people. After a woman was raped in New York’s Central Park, he called for the five Black and Brown teenagers who were wrongfully accused to be executed. And then came his obsession with Barack Obama’s birth certificate.

Trump has spent his entire life treating people of color as less than. Those who consider themselves their allies haven’t fared much better. His presidential run began with his description of Mexican immigrants as rapists and criminals, a foreshadowing of his presidency during which anyone he perceived as different or disagreeing with him would be on the receiving end of insults and taunts, at best, and cruel policies at worst. Trump and his sycophants banned Muslims from entering the country, separated children from their parents at the border, and blocked refugees from settling here. It’s clear that many Americans have rejected Trump and his personal attacks. What about the system that gave us Trump in the first place, one that more than 70 million Americans believe is working?

What about the system that gave us Trump in the first place, one that more than 70 million Americans believe is working?

History will likely say that the coronavirus and the nationwide protests contributed to Trump being a one-term president. Though the protests were explicitly racial, the impact of the coronavirus, like everything else in the United States, can also be drawn around racial lines. Black and Brown people are disproportionately getting sick and dying from the disease, and in some ways, Trump cannot entirely be blamed. He did not invent the health care system that is currently exacerbating deaths among Black people—though he has done his best to undermine what little health care protections already exist. The fact that our social safety net has been so whittled away that a disproportionate number of people of color were forced to continue to work during a pandemic just to pay bills was a problem predating the Trump era.

As the pandemic surged, hospitals filled, schools and businesses shut down, and Trump bragged about the federal response, a white police officer in Minneapolis kneeled on George Floyd’s neck for nine minutes, killing him, and sparking a nationwide multiracial protest movement not seen in generations. The president sent federal troops to American cities and gave his full support for police officers and some white nationalists, even when video emerged of law enforcement attacking peaceful protesters. For Trump, the business of policing often requires excessive use of force and to suggest otherwise was antithetical to the America that was being jeopardized by all the mayhem. In a perverse way, he was right.

The danger in treating Trump like some kind of an aberration, like a stranger in the night who caught democracy off guard, is that we end up falsely believing just one simple act can restore decency to a nation. But this summer’s beginning of a racial reckoning proved that millions of people, even those who were well-intentioned, had no idea how fragile the foundation was. Consider the many people who cast renewed birtherism claims about Vice President–elect Kamala Harris. As I wrote in August:

So now, when birtherism reappears to attack Harris, you’d think we’d be prepared to stop the vile lie in its tracks. It’s not as if the birther-in-chief has delivered us to the Promised Land. Just look at where we are right now, as a country. More than 170,000 coronavirus deaths. Federal troops invading American cities. An unparalleled economic crisis. If birtherism’s first iteration gave us Donald Trump, what horrors could Part Two unleash?

Trump would not have been so successful in his campaign of racism and hate if this country wasn’t filled with ripe opportunities and vulnerabilities to exploit.

The danger in treating Trump like some kind of an aberration, like a stranger in the night who caught democracy off guard, is that we end up falsely believing just one simple act can restore decency to a nation.

If you need evidence of how dangerous this moment is, consider what Trump and his Republican enablers are doing in response to his defeat. Rather than acknowledging the loss and engaging in a peaceful transition, the president and his cronies—including the Attorney General—are filing frivolous lawsuits alleging that votes in Philadelphia and Detroit were “illegal.” Coincidentally, these are just the locations where Black voters helped President-elect Joe Biden. The message is stunningly clear: The Black people who voted for Biden are illegitimate. It’s a message not remotely based in reality, and it’s unlikely to succeed in overturning the election results, but it does have the nefarious effect of normalizing what should be out of bounds, and giving future Republicans a playbook for the same Hail Mary pass. Whenever Black voters help Democrats win elections, is it out of the question for a Republican to protest that their votes were illegal. One last grift with horrific consequences for marginalized people. It’s a fitting end for the chaotic and racist Trump presidency.

It’s always tempting to refer to history’s turning points. The Emancipation Proclamation, the Civil Rights Act, the election of the first Black president. And those turning points, reliably, are met with backlash—or whitelash. Jim Crow laws, lynchings, the Southern strategy which gave us the modern day GOP, and of course, Donald Trump. If we are to prevent another backlash, we must somehow resolve the vulnerabilities, the immorality in our system that Trump expertly exploited. Because even though Trump targeted marginalized groups, racism hurts us all. Take the coronavirus, for example. Racial disparities in who was getting COVID and wealth disparities in general meant that poor people and people of color who couldn’t afford to get sick continued going to work and spread the virus. Yes, the big parties and motorcycle rallies did not help. In contrast, wearing masks did.

There are signs that perhaps a Biden presidency can be the beginning. His administration will set up a task force to study COVID-19 racial disparities, a recognition that people of color are sicker, not as an aberration but as a feature of our society. But before we can heal, there must be some consensus about what we’re healing from. Even well-intentioned people have found it difficult to accept that there is a sickness that goes much deeper than Trump. After all, 70 million people cast a ballot supporting him.

It will be good to have a president who listens to science, won’t defend armed white people who kill protesters, and will not see the presidency as an opportunity to enrich himself and his family members. But, at least for this Black woman, after 400 years of devaluing our lives, it is not enough. Biden must be committed to fighting racial injustice, and a first step would be to have the racial impact be factored into all his policies. While the GOP has offered nothing but grievance politics and managed to convince its base that the party would rather be miserable so long as its neighbor is more miserable, Biden’s presidency can show that what’s good for Black people—health care, housing, ending the pandemic, fighting climate change—is good for us all.