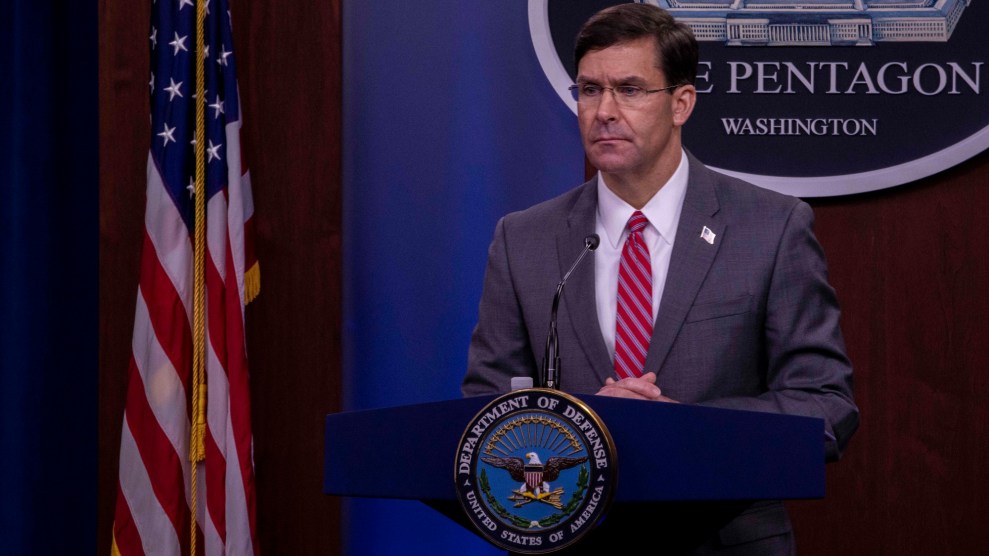 Mark Esper was fired as defense secretary on Monday, becoming one of the first casualties of President Donald Trump’s post-election purge of officials seen as insufficiently loyal to him. Esper’s ouster had been rumored for months, following his public opposition to Trump’s efforts to involve the military in quelling protests over police brutality and racism. At an unusual press conference in June, Esper suggested that Trump’s threat to invoke the Insurrection Act, a law allowing the military to serve in a domestic law enforcement role, was not warranted.

…Chris will do a GREAT job! Mark Esper has been terminated. I would like to thank him for his service.

Esper’s move stunned Trump, who reportedly confronted him about it during an Oval Office conversation. Reports of his likely resignation or removal trailed the secretary for months, culminating in an NBC story last week that said Esper had prepared a letter of resignation. Esper’s spokesperson denied the report, but just four days later, Esper was fired and replaced by Christopher Miller, Trump’s director of the National Counterterrorism Center. Federal law dictates that the Pentagon’s No. 2 official, Deputy Defense Secretary David Norquist, take over when the position of defense secretary is vacant, but Trump’s appointment of an official from outside the department ignores that statute. As University of Texas School of Law professor Stephen Vladeck noted on Monday, the Pentagon’s mandated rules of succession seem to conflict with the Federal Vacancies Reform Act, which would permit Miller’s appointment, so it’s not clear which law takes precedence.

Esper had been criticized extensively for his initial response to the nationwide unrest following George Floyd’s death. On a June 1 conference call with governors, he urged them to “dominate the battlespace,” drawing criticism from several former Defense secretaries, including James Mattis. Later that day, he joined Trump outside the White House as peaceful protesters in Lafayette Square were forcibly removed to make way for a bizarre photo op outside a church across the street, where Trump held up a Bible. Esper gave a series of shifting explanations for his presence there, at first claiming he needed to inspect a vandalized bathroom, and later suggesting he wanted to oversee National Guard members and had no knowledge of Trump’s plans to clear the park. The violent spectacle culminated in two Guard helicopters flying low over a Washington, DC, neighborhood in an apparent “show of force” against protesters, sparking widespread condemnation among retired military leaders. A National Guard internal investigation eventually concluded that the helicopters were not authorized to be there.

Esper, who took over as Defense secretary in July 2019, was no outsider to the role. He had been Trump’s Army secretary and was nominated to replace Mattis, who resigned in December 2018 amid conflicts with Trump, after acting Defense Secretary Patrick Shanahan withdrew from consideration. Esper’s nomination received bipartisan support, but some lawmakers, such Sen. Elizabeth Warren (D-Mass.) were uncomfortable with his stint as a lobbyist for Raytheon and criticized him for not adopting a strict ethics pledge to separate himself from matters involving his old employer. Raytheon is one of the biggest defense firms that competes for Pentagon contracts and, since Trump took office, has aggressively lobbied for arms sales to Saudi Arabia and other Gulf allies, which Congress has opposed given the recent track record of these weapons being used to commit atrocities in Yemen.

Esper declined to adopt Warren’s pledge and proceeded to carve out an influential, if understated, role as one of Trump’s main advisers. He developed an especially close relationship with Secretary of State Mike Pompeo, who had been his classmate at West Point. For a time, he even showed more transparency with the Pentagon press corps, which Mattis had long ignored.

He also honed a talent—at least for a time—for appeasing Trump, drawing concerns from senior leaders that he was too conciliatory toward the president. Some of them even nicknamed him “Yesper” behind his back.

His firing brings to a close an especially chaotic time for the Pentagon, which has grown used to frequent vacancies and quick staff turnover under Trump. Given Trump’s failed reelection campaign, Miller, the new defense secretary, will only have the reins at the Pentagon for a few months—unless the lame-duck president chooses to make another surprise switch.