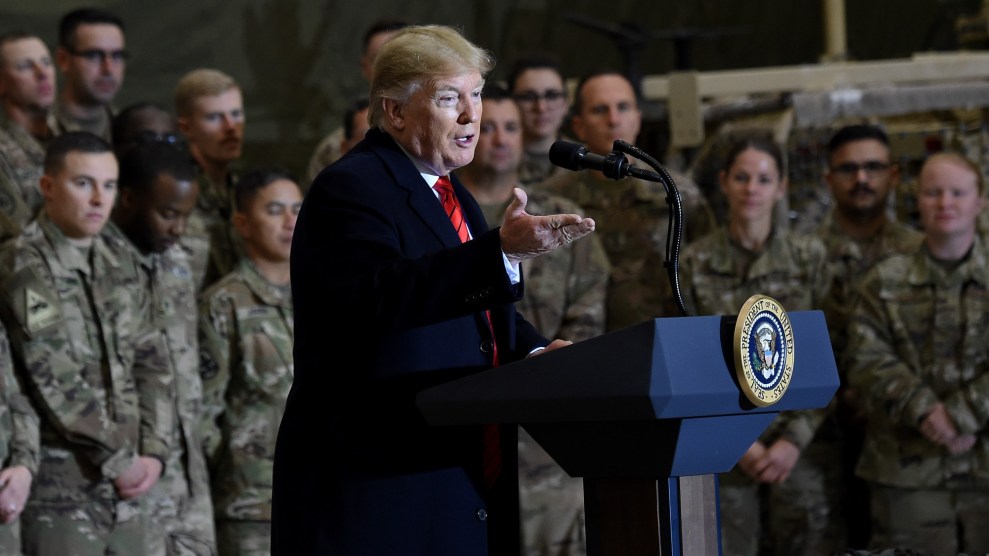 President Donald Trump only has about two months left in office—despite his persistent claims to the contrary—and in that span of time, his administration seems intent on withdrawing a significant number of US troops from Afghanistan. Nothing is definite in Trumpworld until it happens, but on Monday night, CNN reported that the Defense Department is planning to reduce the number of US troops in Afghanistan and Iraq to 5,000 total by the end of Trump’s term. (On Tuesday, after this article was published, acting Defense Secretary Christopher Miler formally announced this drawdown.)

That drawdown wouldn’t accomplish Trump’s stated goal of bringing all US troops in Afghanistan home by Christmas, but it would slice the total number of US personnel serving there and in Iraq by about one-third, based on a rough understanding of current deployments. The Pentagon would not confirm for me the total number of US troops currently serving in Afghanistan and has not been exactly forthcoming in the past about how many troops are stationed overseas. (Case in point: Ambassador James Jeffrey, the outgoing US envoy to Syria, told Defense One last week that his team was “always playing shell games” to mask the fact that more troops had stayed in northeast Syria than Trump had agreed to leave there.)

If Trump is able to push even further and end all US military operations in Afghanistan, that would itself be a milestone moment, especially for a lame duck president obsessed with shoring up his own legacy. To accomplish the plan, he would need to overlook enormous logistical concerns, as well as the presence of a weak Afghan government that has struggled to assert control at a time when Taliban attacks on that country’s security forces are rising. His party, which has generally been loyal to a fault, is also not clamoring to support this particular effort. Senate Majority Leader Mitch McConnell (R-Ky.), one of many hawkish Republicans to sound off about the plan to Politico, said it would “would hurt our allies and delight the people who wish us harm.”

Then there is the antiwar movement, which has its own complicated relationship to Trump. For all his talk about avoiding wars, Trump has still signed massive defense budgets and has made a show of completing controversial arms sales to allies like Saudi Arabia, which has used American weapons in attacks that have killed scores of civilians in Yemen. He’s also aggravated tensions with Iran by ordering the assassination of one of its generals, and he nearly approved a series of strikes against Iranian military targets last year. Last week, Trump again debated whether to strike Iran, but was dissuaded by his advisers, the New York Times reported.

Few progressives are rushing to support Trump on any issue, but a full Afghanistan withdrawal would align with their foreign policy vision and dial the pressure up on Joe Biden to get serious about reining in the US military’s presence overseas. Dan Caldwell, a senior adviser to the libertarian-leaning, Koch-backed Concerned Veterans for America, which has allied with progressive groups to support a more restrained US foreign policy, told me that Trump’s approach to Afghanistan should be applauded by progressives, however nauseous they may be about Trump’s other behavior and policies. “If the president ultimately announces that he is going to complete a full military withdrawal from Afghanistan in January, then I would hope those on the progressive left who have been advocating for this for years are supportive of this despite their discomfort with President Trump,” Caldwell told me. “I understand there are some concerns with how this is happening, but this is in reality the best opportunity we have to close the book on America’s longest war.”

This withdrawal, if it even happens, is occurring against the backdrop of Trump’s decision to purge the Pentagon’s senior ranks last week, firing Defense Secretary Mark Esper and replacing other top officials with inexperienced loyalists. The new DoD policy chief, Anthony Tata, is an outright conspiracy theorist who once called Islam the “most oppressive violent religion I know of.” Some of these appointments reek of blatant cronyism and are of a piece with loyalty purges underway throughout the Trump administration, from the Department of Homeland Security to the US Agency for International Development. But with Trump diehards in place, there is less of an organized resistance to his push for a rapid Afghanistan withdrawal.

Esper and General Mark Milley, who chairs the Joint Chiefs of Staff, have long been critical of the administration’s plan for a total withdrawal. Before he was fired, Esper sent a classified memo to the White House outlining problems with any additional cuts to US forces in Afghanistan, the Washington Post reported last week. Looking at the people who Trump elevated in the wake of Esper’s firing, it wasn’t hard to notice a trend. Douglas Macgregor, a retired Army colonel who was brought on as an adviser to acting Defense Secretary Christopher Miller, has argued for Trump to remove US troops from Syria, Afghanistan, and even South Korea. Miller, in a November 13 letter to Defense Department personnel, said, “We met the challenge; we gave it our all. Now, it’s time to come home.” In a follow-up message on Monday, he hedged slightly, stating that one of his goals is to bring the “current war to an end in a responsible manner that guarantees the security of our citizens.”

Andrew Bacevich, president of the Quincy Institute, a nonpartisan think tank that supports military restraint, told me it would be “daunting” for Trump’s ragtag national security team to complete a full withdrawal from Afghanistan. But he said, “It would delight me if the president were able to pull this off.”

Medea Benjamin, co-founder of antiwar group CODEPINK, said her organization always commended Trump’s push to remove troops from Afghanistan but “noticed that we were out on a limb because others were too afraid to talk about him doing well.”

“It’s amazing—the backlash for any kind of troop reduction in wars we’ve been in for almost 20 year now,” she said.

A complicating factor for progressives intent on bringing US troops home is the looming Biden presidency and the likely selection of Michèle Flournoy as Defense secretary. In a 2017 interview, Flournoy said the events following the exit of US forces in Iraq showed “the dangers of a precipitous withdrawal” and argued that “we don’t want to see a repeat of that in Afghanistan.” Her opinion aligns with the other candidates for major national security roles in a Biden administration, including Susan Rice and Sen. Tammy Duckworth (D-Ill.), who said Monday on CNN that an immediate drawdown during the transition period “is just prime ground for our adversaries to look and see what they can get away with while we’re distracted.”

Susan Rice, NSA to Obama & possible SecState for Biden, says of Afghanistan that a Biden admin will seek to end the forever wars but says it “needs to be thoughtful & measured,” without doing things like putting allies at risk & harming the US relationship with the Afghan govt.

Biden seems inclined to pump the brakes as well, telling Stars and Stripes in September that he thinks “1,500 to 2,000” soldiers should remain in Afghanistan. If Trump sticks with the plan to withdraw roughly one-third of the US troops in Iraq and Afghanistan, Biden could essentially maintain the status quo. A February peace agreement brokered in Qatar with the Taliban commits the United States to a phased withdrawal of troops, but it’s possible for a reserve force to stay behind as a bulwark against al-Qaeda and the Islamic State. But if Trump commits to a full withdrawal, the pressure on Biden to maintain that policy could be significant. Already pro-withdrawal conservatives have been sounding that drum. On Tuesday, Will Ruger, who Trump nominated in September to be ambassador to Afghanistan, co-wrote a Washington Post op-ed calling for Trump to bring US troops home “with all due haste,” in part because that will make it “more difficult politically to unwind.” When I asked Ruger in an email to clarify if he was advocating for a full withdrawal, he said, “Yes, the goal should be a full military withdrawal (minus those needed to secure the embassy, of course). And it should be done in a speedy fashion lest mischievous hands take an opportunity to undermine the Doha agreement and keep troops there ad infinitum.”

If Trump does deliver on a full withdrawal, Benjamin and the other activists cheering for that outcome are ready to support it, even if a figure as loathed as Trump is the one to do it.

“We have to love peace more than we dislike Donald Trump,” she said.