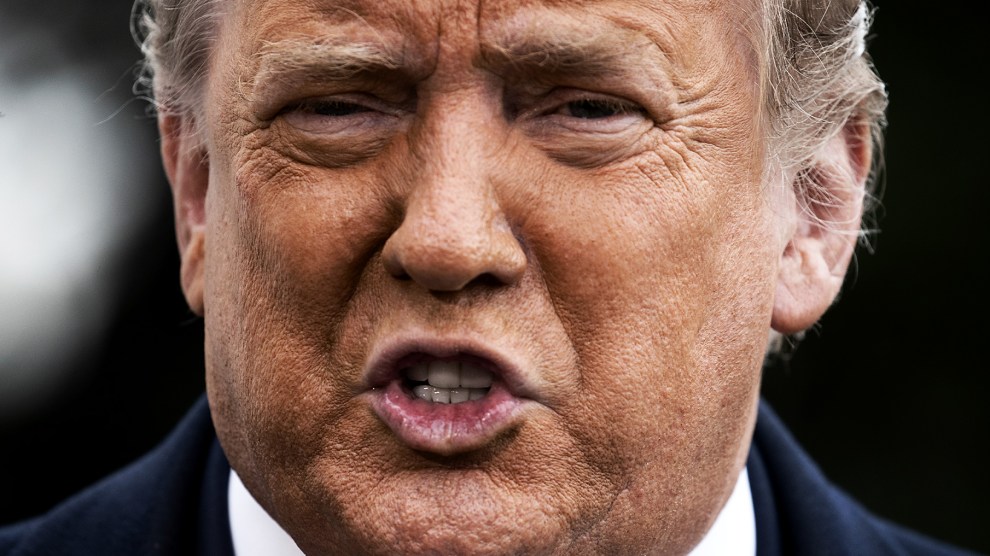 After Donald Trump is done trashing American democracy, he may have a new target: the Republican Party.

As Trump during the last few days has baselessly claimed that the election is a “fraud” and is being stolen from him, his henchmen have rushed to establish a litmus test for conservatives and the GOP: whether or not they rally to Trump’s side and support his unfounded accusations. Like those defeated in the Civil War, they are setting up a new Lost Cause and creating a loyalty test: A true Republican stands with Trump in his crusade against the “corrupt” voting system that is trying to rob him of the presidency.

Though a few Republicans have joined Trump’s attack on the election—Ted Cruz, Lindsey Graham, Newt Gingrich—the party and the conservative movement have not rushed to the barricades to defend Trump. Sen. Mitt Romney (R-Utah) tweeted: “Counting every vote is at the heart of democracy…Have faith in democracy, in our Constitution, and in the American people.” Sen. Pat Toomey (R-Penn.) said Trump’s accusations were “disturbing” and pointed out there was no evidence of fraud. Former New Jersey Gov. Chris Christie called on Trump to stop inflaming the situation. On Fox News, pro-Trump anchors did not amplify the president’s claim of election theft (though they did complain mightily about the vote-counting system). The New York Post described a tweet from Donald Trump Jr.—calling for “total war”—a “clueless tweet.” Conservative commentator Ben Shapiro rebuked Trump for claiming he had won: “It is deeply irresponsible for him to say this.” On Friday morning, Senate Majority Leader Mitch McConnell said every vote should be counted, and ignored Trump’s claim that the president was being shafted.

The lack of GOP solidarity with Trump’s assault on the election has enraged Trumpers—especially Donald Trump Jr. He retweeted a conservative commentator who griped, “I can’t help but think that a lot of republicans are hiding because they would rather be rid of Trump than fight.” At a press conference in Atlanta on Thursday night—where no questions were taken—he angrily exclaimed that the Republican Party for too long had “no backbone” and that any Republican who didn’t join Trump’s fight to retain power “should go.”

Eric Trump has also been trying to whip up support among Republicans. After Lindsey Graham donated $500,000 to Trump’s legal defense fund, Eric Trump tweeted: “Thank you for having spine! Fight this fraud!” He retweeted right-wing commentator Dan Bongino’s criticism of Republicans: “Awfully odd that some of the people on the GOP side, who just rode Trump’s coattails to an enormous GOP down-ballot upset, seem pretty quiet about the bullshit going on right now. SPEAK UP. WE’RE ALL LISTENING!” And Eric Trump tweet-cried himself: “Where are Republicans! Have some backbone. Fight against this fraud. Our voters will never forget you if your sheep!”

Trump Jr. even appears to have a particular (and extreme) strategy in mind that he wants Republicans to adopt: press GOP-controlled state legislatures, such as the one in Pennsylvania, to nullify the counted vote and send a slate of pro-Trump electors to Congress. He retweeted a message from right-wing radio host Mark Levin, who urged state legislatures to choose electors. This would be a legally dubious move, but it could throw the election into turmoil and force a slew of court fights and possibly a battle within Congress. Graham, for one, has talked up the idea. But the Republican majority leader of the Pennsylvania senate has repeatedly said he does not support such a step. It’s not too hard, though, to envision pro-Trumpers directing anger at him, should they decide to push forward with this desperate strategy.

Trump Jr. has done more than just moan about AWOL Republicans. He has issued a not-too-veiled threat to GOPers: If you don’t stand with my father now, we will seek revenge, especially if you’re considering running for the Republican presidential nomination in four years. On Thursday afternoon, he tweeted: “The total lack of action from virtually all of the ‘2024 GOP hopefuls’ is pretty amazing. They have a perfect platform to show that they’re willing & able to fight but they will cower to the media mob instead. Don’t worry @realDonaldTrump will fight & they can watch as usual!” And in another tweet, Junior exclaimed, “For GOPers to not stand up now shows your true colors. Will make the 2024 primary process a lot easier.”

Get it? As expected, the 2024 race has already begun. There has been speculation that Trump might run again. But there are plenty of other Republicans considering a bid. And what Trump Jr. was suggesting to them was that they’ll likely need Trump’s voters—and perhaps Trump’s blessing—to win the nomination. But if they don’t rush to Trump’s side now, forget about it. Moreover, the entire GOP might become a target of Trump’s wrath if it leaves him in his moment of need.

This could all be bluster. That runs in the family. But if Trump and his family come to believe they have been abandoned by the Republicans—stabbed in the back!—the party could face a rough ride, as the Trump crowd has a habit of pursuing vengeance. (Trump, as we know, is motivated by spite, spite, and spite.) The Republicans are going to have a tough time figuring out what to do after Trump. It won’t be easier if there’s an internecine battle between the Trump clan and party regulars.

Losing is lonely, and Trump has been stewing in the White House over who has his back. So far, most of the Republican Party—finally—is not tying itself to Trump’s mast and joining his demagogic effort to delegitimize the election. But there might be a price to pay for this. Trump never forgets a grudge. He never forgives. A wounded, defeated Trump could become a serious problem for the GOP.