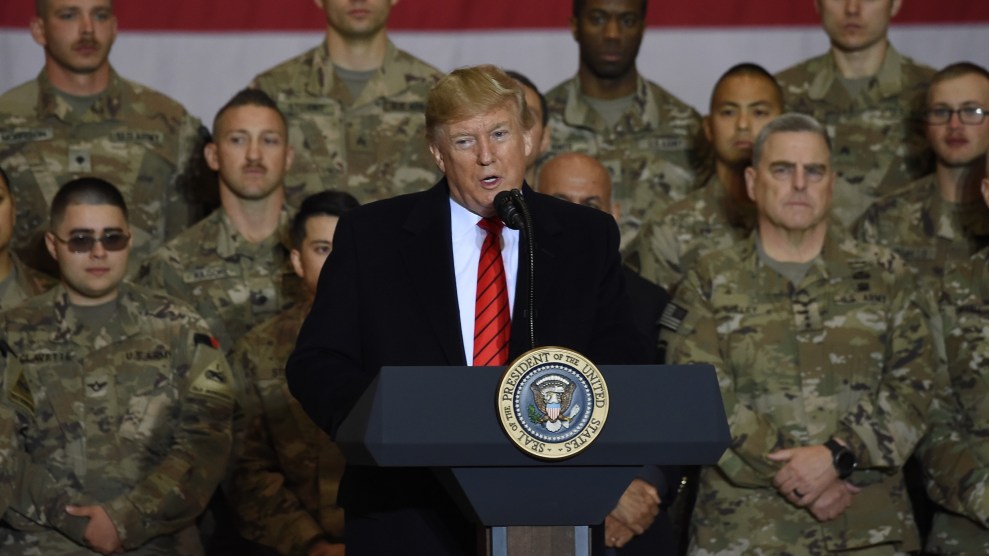 More than three years ago, President Donald Trump announced that he would “lift restrictions and expand authorities” for United States troops in Afghanistan—giving the military a freer hand to order airstrikes. Now the cost of that lax approach is becoming clear.

Since 2017, the United States, its international allies, and the Afghan government have killed an average of 1,134 civilians per year, a nearly 95 percent increase from the average between 2007 and 2016, according to report released Monday from Brown University and Boston University’s Costs of War Project. The bulk of that increase has come from an aggressive escalation of the Defense Department’s air war and a greater handoff of responsibilities to the Afghan Air Force.

Even as US airstrikes briefly declined earlier this year following the February announcement of a peace agreement between the Taliban and United States, the US-backed Afghan Air Force has bombed at a more frequent clip—with more devastating consequences. Through September, Afghan Air Force strikes have killed 156 civilians, a 38 percent increase from all of last year, though that number could dip now that the Taliban and Afghan government have reached their own, preliminary peace deal. (The February agreement didn’t include the Afghan government.)

After Trump took office, the Pentagon escalated its air war against the Taliban and the Islamic State in Afghanistan, leading to a historic increase in civilian casualties. In 2017, the United States bombed Afghanistan at its highest rate since 2011, the height of the Obama-era troop surge. That April, Trump approved the use of a weapon nicknamed the “mother of all bombs” on an Islamic State hideout in Afghanistan. In comments to the press after the attack, Trump congratulated himself for loosening the military’s rules of engagement. “What I do is I authorize my military,” Trump said. “We have given them total authorization and that’s what they’re doing and, frankly, that’s why they’ve been so successful lately.”

A few months later, in testimony before the Senate Armed Services Committee, then-Defense Secretary James Mattis made clear what that “total authorization” entailed. A US airstrike originally needed to satisfy a “proximity requirement” under which US troops or an allied group must be close to enemy forces in order to reduce the likelihood of civilians being harmed. “That is no longer the case,” Mattis told lawmakers, meaning the restrictions “that did not allow us to employ the air power fully have been removed.” Fewer restrictions on airstrikes generally portends more civilian casualties. That certainly proved to be the case in Afghanistan. After killing 154 civilians from airstrikes in 2017, the United States and its allies killed 393 in 2018 and 546 in 2019. (In 2019, Trump told reporters, “We could win Afghanistan in two days or three days or four days if we wanted, but I’m not looking to kill 10 million people.”)

In fact, under Trump, the US military was pursuing a strategy that tolerated a higher risk of bloodshed as the cost of putting more pressure on Taliban negotiators. Neta Crawford, a Boston University political science professor who wrote the Costs of War Project study, described the military’s approach to Mother Jones as “when you put the thumbscrews on people, they’ll capitulate.” That’s why the number of Afghan civilians killed by international airstrikes increased by 330 percent from 2016 to 2019, the most recent year for which complete data is available. “Civilians have paid the price for this doctrine, this theory of victory,” Crawford said, comparing it to the similar, failed strategies employed by the United States military in Vietnam and Korea. “It doesn’t accomplish much more than increasing the will to resist.”

The depth of the US military’s continuing involvement in Afghanistan is not entirely clear. After signing the peace deal with the Taliban in February, which included conditions for withdrawing US troops, the Pentagon stopped releasing certain figures crucial to understanding the war effort, including monthly summaries of airstrikes and information about Taliban attacks against the Afghan government.

The exact number of US troops in the country is also murky. In February 2020, Crawford reports, there were “about 12,000 US military personnel in Afghanistan.” Trump has said he intends to reduce that number to about 1,500 people by the end of his term. Even as the US military presence has decreased in Afghanistan—from 100,000 at the Obama-era peak to possibly fewer than 2,000 when Joe Biden is inaugurated—US airpower poses a continued threat to Afghan civilians. Between August and October, months after the peace deal with the Taliban was completed, US airstrikes increased again to help the Afghan government ward off rising levels of Taliban violence, the special inspector general for Afghanistan reconstruction concluded in a quarterly report.

The result has been a grisly stain on Trump’s record—and a retread of the same policies US generals were warning against in the early days of the Obama administration. Shortly after General Stanley McChrystal took control of US forces in Afghanistan in June 2009, he ordered that the rules of engagement for airstrikes be tightened. “Air power contains the seeds of our own destruction if we do not use it responsibly,” he told a group of his senior officers, according to a New York Times story that month. “We can lose this fight.” In his memoir, which Crawford quotes in her report, McChrystal was even more blunt about the cost of civilian casualties in imprecise airstrikes. “We’re going to lose this fucking war if we don’t stop killing civilians,” he recalls telling his staff. Ten years later, the United States is still fighting the same war.