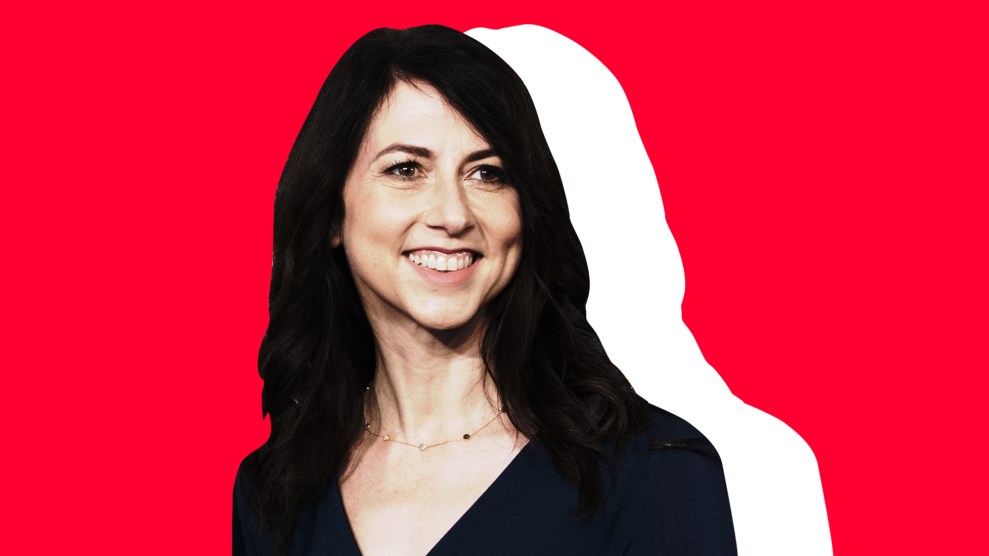 Never mind the old saying. A person actually can be too thin—and too rich. Consider the opening lines of Just Giving, an eye-opening book published earlier this year by Stanford political scientist Rob Reich:

“Your fortune is rolling up, rolling up like an avalanche! You must keep up with it! You must distribute it faster than it grows! If you do not, it will crush you, and your children, and your children’s children!” So wrote Frederick Gates to sixty-seven-year-old John D. Rockefeller in 1906. Rockefeller was the founder of Standard Oil, a corporation that had generated a colossal fortune and made him the richest man in the world.

Gates was Rockefeller’s trusted business and philanthropic adviser, who helped the tycoon incorporate one of the nation’s first general purpose charitable foundations, but he could easily have been delivering that warning to Bill Gates or Jeff Bezos—or perhaps the novelist-turned-philanthropist MacKenzie Scott, who made headlines last week when she revealed on Medium that she has spent the past four months giving away almost $4.2 billion to 384 organizations in the United States and Puerto Rico.

Scott did not do this alone. Her efforts, she wrote, required a host of experts and advisers working on the project full time:

The team sought suggestions and perspective from hundreds of field experts, funders, and non-profit leaders and volunteers with decades of experience. We leveraged this collective knowledge base in a collaboration that included hundreds of emails and phone interviews, and thousands of pages of data analysis on community needs, program outcomes, and each non-profit’s capacity to absorb and make effective use of funding. We looked at 6,490 organizations, and undertook deeper research into 822. We put 438 of these on hold for now due to insufficient evidence of impact, unproven management teams, or to allow for further inquiry about specific issues such as treatment of community members or employees. We won’t always learn about a concern inside an organization, but when we do, we’ll take extra time to evaluate. We’ll never eliminate every risk through our analysis, but we’ll eliminate many. Then we can select organizations to assist—and get out of their way.

In other words, giving away a fortune is work—painstaking work, as those faced with the task have long known. “It is well to remember,” the industrialist Andrew Carnegie wrote in 1889, “that it requires the exercise of not less ability than that which acquires the wealth, to use it so as to be really beneficial to the community.”

This is one theme I explore in Jackpot, my forthcoming book on American wealth and inequality based on two years of research and reporting. One super-wealthy character, also an author, laments that she just wants to write her books, but her inherited millions have created such a burden of responsibility (to put the money to beneficial use) and fear (of how it might affect her children) that she can barely focus. Her family’s fortune—from financial services, not books—has brought her big advantages but also anxieties, complicating her relationships, parenting, and sense of place in the world. It’s not as though she can commiserate with her less-privileged friends, either. The typical response to the problems of rich people is, “So, why don’t you just give all your money away?”

Because it’s really hard. On May 25, 2019, not long after ending her quarter-century marriage with Bezos, Scott signed Bill Gates’ Giving Pledge, agreeing to dedicate a majority of her wealth for charitable purposes, preferably while she’s still alive. A majority means just over half, but Scott vowed to “keep at it until the safe is empty.”

And that’s a tall order. When she signed the pledge, Scott was worth about $37 billion, mostly in Amazon stock, which has soared during the pandemic. This past September, she briefly became the richest woman in the world, with assets exceeding $66 billion. (Alice Walton quickly snatched the title back.) This Bloomberg chart shows the value of Scott’s holdings over the past 12 months.

Since the mid-1980s, the fortunes of America’s wealthiest families have indeed rolled up like an avalanche. Just from 2016 to the present, the combined net worth of Americans with assets of $30 million or more increased by almost one-third. Our way of capitalism and political influence-peddling, combined with longstanding tax policies that favor wealthy investors over everyday workers, ensures that the more money you have, the more you will get. “I think possibly with only one or two exceptions every single person on the Giving Pledge has more money today than when they signed the pledge, and their net gains exceed what they’ve given since they signed the Giving Pledge,” author Reich told me in June.

The COVID fiasco, more so than most disasters, has triggered an outpouring of charity. “We’ve seen significantly larger gifts from more high-net-worth individuals than ever before,” Adia Colar, a spokesperson for Candid, which tracks foundation activities, said in an email. An analysis by the Council of Foundations based on surveys of 250 philanthropic leaders found that about 60 percent of their foundations were giving more than originally planned for 2020—the average increase was 17 percent. Most of them, like Scott, were also placing fewer restrictions than Big Philanthropy normally does on how the beneficiaries could use their gifts.

“Most philanthropy is scooping soup. It doesn’t ask the question, ‘Why are there so many people in line who need soup?”

The George Floyd protests, too, prompted people to open their pocketbooks. “Funding spikes for racial equity in 2020 have been unprecedented,” Colar notes. Direct comparisons are difficult because of recent changes in the way Candid procures its data; yet from 2011 to 2019, the organization tracked $3.3 billion in giving by American donors focused on racial equity. For 2020, as of mid-December, Candid tallied $10.9 billion in US grants, including $882 million from individuals. That means more than three-quarters of this decade’s racial-equity giving came in this year alone.

The largesse is long overdue. For decades, overall giving rates haven’t come close to matching the growth in value of the equities markets, which accounts for the majority of wealthy Americans’ fortunes. For example, private foundations in the United States spent only 6 percent of their assets on grants and overhead in 2019—a year in which the S&P 500 gained a whopping 29 percent.

To Scott’s credit, she is well on her way to creating a new blueprint for social justice giving, a not-so-subtle kick in the ass to fellow billionaires—including her ex, the biggest of the big fish—who avoid taxes like the plague, and whose philanthropy often just perpetuates the cycle that directs the nation’s spoils disproportionately into their own coffers. This past summer, she completed another big round of giving focused on leveling the playing field—$587 million to racial equity causes, $46 million to LGBTQ equity, $133 million to gender equity, $400 million to bolstering economic mobility. If you are wealthy and you lament the unfairness baked into our system—and you actually mean what you say—this is the way to give. Wholeheartedly.

“Most philanthropy is scooping soup,” points out Nick Hanauer, an early Amazon investor and self-described “plutocrat” who has put considerable time and effort into tackling economic inequality. “It doesn’t ask the question, ‘Why are there so many people in line who need soup?’ The truth is, they need soup because they’re not paid enough…And so, you can scoop soup—or you can build a national movement around forcing companies like Walmart to pay people enough so they don’t fucking need to go to the soup kitchen to get their food.”

My interview with Hanauer took place well before COVID-19 took a “wrecking ball” to popular perceptions of where we stand as a nation, to borrow Scott’s reference. “I watched the first half of 2020 with a mixture of heartbreak and horror,” she wrote in July. “Life will never stop finding fresh ways to expose inequities in our systems; or waking us up to the fact that a civilization this imbalanced is not only unjust, but also unstable.”