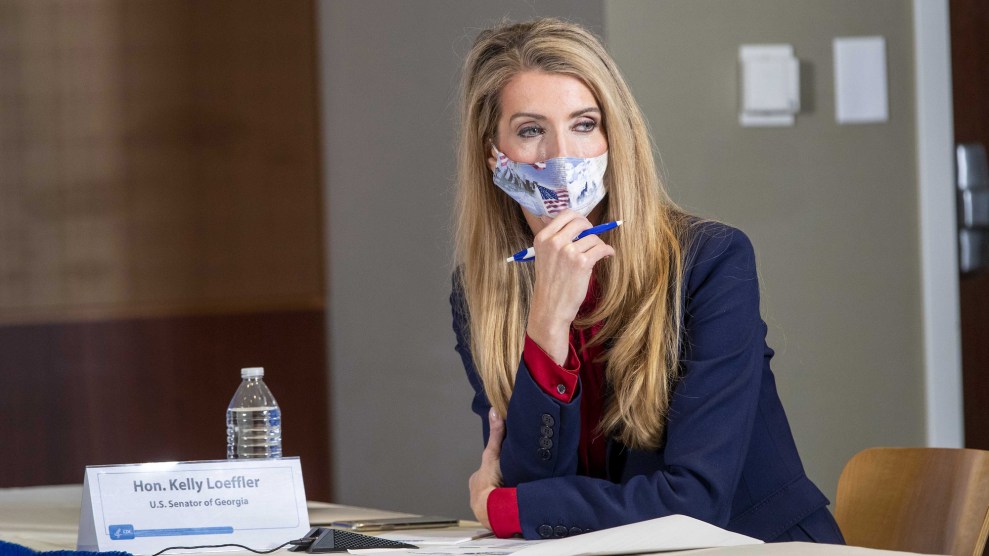 Sen. Kelly Loeffler listens during a round table discussion with Vice President Mike Pence in Atlanta on December 4.TNS/ZUMA

As she campaigns for reelection in the January 5 run-off, Kelly Loeffler, the super-wealthy former corporate executive and Republican donor who was appointed in late 2019 to a vacant US Senate seat in Georgia, has had to deal with bruising revelations about her personal finances and business dealings. These include the fact that when she entered the Senate in January 2020, she was given a spot on the Agriculture Committee, which oversees government regulators of the Fortune 500 business where she was recently a top officer. The company, Intercontinental Exchange (known as ICE), owns and operates a number of financial and commodity exchanges regulated by the Commodity Futures Trading Commission, which falls under jurisdiction of the Agriculture Committee.

Loeffler’s assignment to the committee seemed a whopping conflict of interest: She still owned between $5 million and $25 million in ICE stock, and her husband, Jeffrey Sprecher, is its CEO. Worse, Loeffler was placed on the committee’s subcommittee on commodities, which has direct oversight of the CFTC. In response to criticism, she left the subcommittee in May but remained a member of the full committee.

Yet one piece of this tale has received little notice. Her conflict of interest was even more pronounced, for while Loeffler was on the commodities subcommittee, the CFTC took several actions that impacted ICE. This means Loeffler was overseeing regulators at the same time they were engaged in activity affecting a company she was intimately tied to as a current shareholder, former executive, and spouse of its CEO. That’s very swampy.

The CFTC is highly important for ICE. As the firm’s annual report put it, several of its exchanges are “subject to extensive regulation by the Commodity Futures Trading Commission.” The Wall Street Journal noted that the CFTC’s “rule-making agenda can have a major impact on the company’s operations.” While a senior exec at ICE, Loeffler criticized the CFTC for proposing “excess regulation.”

One particular conflict was rather obvious. In 2018, Loeffler left the ICE corporate team to become head of Bakkt, a new federally regulated market for trading Bitcoin that ICE launched. A short time later, when she was a senator overseeing the CFTC, ICE was concerned that Bakkt could be severely hurt by CFTC regulations. ICE pointed this out in a filing it submitted to the Securities and Exchange Committee in February 2020. The filing noted that the “CFTC has designated bitcoin as a commodity…subject to the CFTC’s jurisdiction and enforcement powers.” It stated that if the CFTC pursued an aggressive approach to this exchange, “it may have a significant adverse impact on Bakkt’s business and plan of operations.” ICE pointed out that CFTC activity—or the lack thereof—was crucial for the future prospects of the venture Loeffler once headed: “Ongoing and future regulatory actions may impact the ability of Bakkt to continue to operate, and such actions could affect the ability of Bakkt to continue as a going concern.” (In March 2020, the CFTC issued a major decision affecting cryptocurrency markets.)

And Loeffler had a direct financial interest in Bakkt. In early 2019, she was awarded a $15.6 million stake in a company that owned a chunk of Bakkt—about half of which she cashed out at the end of that year when she left the firm, in an arrangement criticized by corporate governance experts.

So Loeffler was one of a handful of senators on the subcommittee that keeps a watch on the CFTC when the commission was making decisions essential to her old company and a subsidiary she had run—two corporate entities in which she held large investments.

At this time, the CFTC was taking other actions that held consequences for ICE. On March 17, 2020, the commission, in response to the coronavirus pandemic, eased reporting requirements for financial exchanges known as “swap execution facilities” and “designated contract markets.” ICE has a swap trade business. It also had a subsidiary, ICE Futures US, that was a designated contract market. As the CFTC noted in its letter announcing this regulatory change, the action had been requested by ICE Futures US and five other exchanges. At the same time, the commission adopted similar steps for “futures commission merchants.” Bakkt was registered as a futures commission merchant with the CFTC.

These regulatory shifts, as the Wall Street Journal explained, would “allow trading venues, banks, brokers and other parties to skip certain record-keeping requirements until June 30 if they work from home. Under normal circumstances traders must have systems in place to record phone calls in which trades are executed, as well as timestamps for derivatives transactions. Because they are unlikely to have access to recorded phone lines and other systems in their homes, the CFTC will allow traders to keep manual records of transactions.” But this move had a possible danger, as Justin Slaughter, a former CFTC official, told the Journal: “There is a risk that some traders will operate in ways that are contrary to regulation or law. That is a very unfortunate risk. It’s the reason we don’t let people trade at home under normal circumstances for large desks. But at the moment we have to take into account other considerations.” Though traders contended this suspension of regulations was necessary during a pandemic, some international regulators feared that permitting traders to put aside crucial means of recording trades would lead to assorted abuses, including insider trading and market manipulation.

The CFTC frequently issued rules related to Loeffler’s old company, as she sat on the subcommittee. In February—pre-COVID—the CFTC revised other regulations for data record-keeping and reporting requirements relevant to ICE and its subsidiaries. And in late January 2020, the commission approved new regulations governing seven different commodity contracts run by ICE.

During this stretch in early 2020, ICE was busy lobbying the Senate, the House, and the CFTC regarding the “regulation of the trading system for agriculture, energy and other futures” and related legislation, according to a lobbying disclosure form the company had to fill out. In the first three months of 2020, ICE spent $726,454 on these lobbying efforts. (ICE’s well-connected lobbyists included Alex Albert, once an aide to former Sen. Zell Miller, a Georgia Democrat, and Hope Jarkowski, a former aide for the Senate Banking Committee.) The firm spent nearly another $500,000 on similar lobbying in the subsequent six months. ICE’s lobbying disclosure forms do not require it to state whether its lobbyists had any contact with Loeffler.

Even though Loeffler departed the subcommittee overseeing the CFTC amid criticism, by remaining on the Agriculture Committee, she did not fully resolve the conflict of interest. And a review of the CFTC’s regulatory actions—particularly when Loeffler was a member of the subcommittee—shows just how far Loeffler went in ignoring the conflict between her official responsibilities and her private interests. She had power over regulators whose work affected her previous companies and her own current financial condition (and that of her husband). In her world, it seems, there was nothing wrong with that.