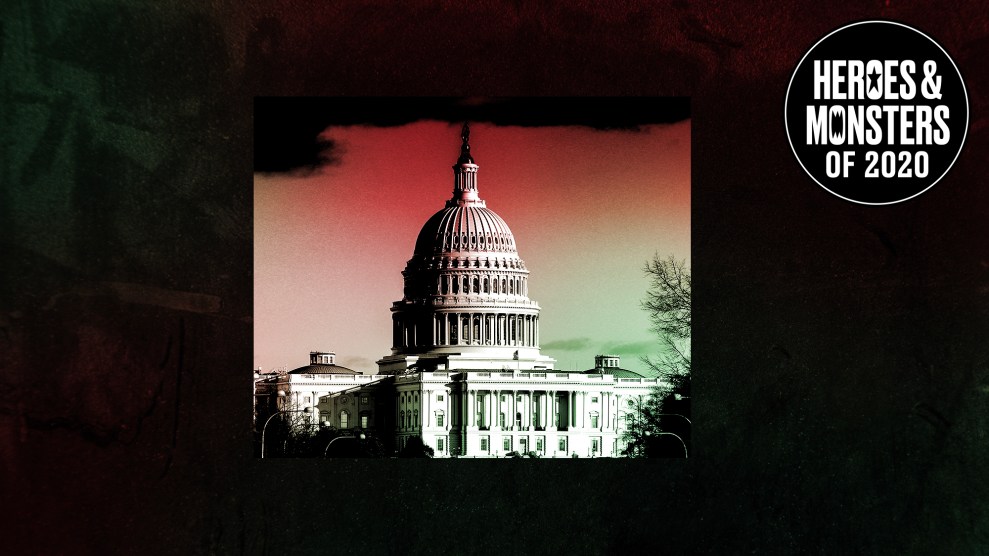 As coronavirus infection rates are rising and the death toll is climbing to horrific heights every day, millions of people are facing eviction, hunger, poverty, and illness. Meanwhile, Senate Majority Leader Mitch McConnell (R-Ky.) seems completely unbothered by the widespread misery engulfing the country. After agreeing to a COVID relief package in March at the beginning of the public health crisis, which included $1,200 stimulus checks for more than 127 million people, and $600 a week unemployment insurance for the people out of work, nine months into the pandemic, the Republican senator from Kentucky spent months resisting passing any more aid. A few points of contention existed with several items in the various bills—one gnarly issue was that the Dems wanted funds to go to states and cities while the Republicans viewed local aid as bailouts for liberal enclaves—but McConnell and his party’s recalcitrance boiled down to much more than a few dollar signs.

The majority leader had bigger interests to protect: namely making sure that corporations would have liability shields over coronavirus lawsuits. Not only would McConnell’s wealthy friends and funders not face repercussions for failing to keep workers safe, the Senate’s inability to pass a bill meant that the Biden administration would have an even more difficult job in trying to fix the economy. Then, McConnell could argue, since the economy is in such bad shape, the government couldn’t afford to spend money to help the public. Win, win—if you’re a Republican senator.

When another coronavirus aid package finally passed three days before Christmas, it was nine months into the crisis and didn’t even come close to what the public actually needs. And since it’s worth keeping score, six Republican Senators voted against it.

The Republicans’ refusal to act on a meaningful coronavirus relief package is part of their larger pattern of either ignoring or trampling on the common good. Whether it’s trying to dismantle the Affordable Care Act or passing tax cuts that disproportionately favor the wealthy, this year has revealed that not only are their priorities backwards, many of them seem perfectly fine with untold economic ruin, unimaginable human suffering, and the systematic undermining of democratic institutions. And while the GOP certainly doesn’t hold a monopoly on grotesque self-interest—though they seem determined to prove that they’re the best at it—as far as I’m concerned, the US Senate, especially Republicans in the so-called world’s greatest deliberative body, has been unique in displaying monstrous contempt for the common good.

And it’s not just coronavirus relief they made close to impossible. As the Black Lives Matter protest movement, a multiracial and generational demonstration that took root in cities, suburbs, and small towns, exploded earlier this year, some senators concluded that this era was the perfect time to open a new front in the battle against civil rights.

Exhibit A could be Sen. Tom Cotton (R-Ark.), who wrote an incendiary and controversial op-ed for the New York Times entitled “Send In The Troops.” (After criticism from readers and NYT employees, an editors note was attached, the top Opinion’s editor was fired and another one was demoted.) Cotton argued that much like the military needed to force a high school in Little Rock, Arkansas, to integrate its schools, it also needed to quash protest movements. “One thing above all else will restore order to our streets: an overwhelming show of force to disperse, detain and ultimately deter lawbreakers,” Cotton wrote. “But local law enforcement in some cities desperately needs backup, while delusional politicians in other cities refuse to do what’s necessary to uphold the rule of law.”

Of course, in his rush to demand that the American military be deployed on American streets, he failed to mention that the troops were sent to his home state in 1957 because racist whites refused to let Black students inside. The military was sent to protect Black students.

But it was not just protesters demanding rights that drew Cotton’s ire this summer. He was also singularly obsessed with arguing against statehood and representation in Congress for Washington, DC. Cotton once posited that sure, the District may have a bigger population than Wyoming, but Wyoming was a “well-rounded, working-class state.” I’m sorry, could you repeat that Senator? I couldn’t hear you over the sound of your racist bullhorn.

I’m sorry, could you repeat that Senator? I couldn’t hear you over the sound of your racist bullhorn.

But despite the many controversies surrounding Trump and his administration—when he shut down the federal government over funding for a border wall, his years-long refusal to release his tax returns, or his incessant and incendiary tweets that would have had Republicans calling for Barack Obama’s resignation—the GOP Senators stood beside him, terrified of his sway over the conservative base. Instead of a system of checks and balances, the Senate was there to defend Trump and ignore his misdeeds while working to please corporate interests at the expense of everyone else.

Donald Trump’s absurd, long-shot and yet still terrifying attempt to reverse the outcome of the presidential election might not have gained so much traction without some friends in high places. Before the electoral college vote, the Washington Post only found 27 Republicans in Congress who would acknowledge that Biden had won the election. Sens. Ted Cruz (R-Tex.) and Lindsey Graham (R-S.C.) are the best examples of Republicans whose towers of convictions can be toppled by the gentle winds of political convenience. Remember, they were both once representatives of the NeverTrumpers, and had very good reasons for their positions. Cruz, still upset over Trump’s obscene insults to both his wife and father, pointedly refused to endorse Trump at the Republican National Convention in 2016. And Graham, still smarting from Trump’s publicizing his personal cell phone number, warned that if the GOP nominated Trump, they would get destroyed—and deserve it.

Ah, how times have changed. Over the last four years, both men seem to be fighting over the spout to see who can guzzle more Trump Kool-Aid. (Graham was the source of mockery in 2017 after tweeting about Trump’s spectacular golf game.) After Trump lost the presidential election by more than 6 million votes and 74 electoral college votes, they still couldn’t find their principles. Graham tried to get election officials in Georgia to toss out ballots, and Cruz agreed to help the president argue his baseless case in front of the Supreme Court, should the new conservative majority yield to the president’s demands and grant a hearing. Fortunately, despite Trump’s confidence that appointing three new justices during his term meant they would rollover like the Republican Party, the nine justices declined to hear the suit.

Though I’ve singled out a few individuals, the problem of the Senate won’t be solved by simply voting McConnell, Graham, and Cruz out of office—and people have tried! The entire institution is a dysfunctional mess. Because each state gets two senators regardless of size, and the two major parties have divided themselves along rural and urban lines, Republican Senators often only compete in smaller and less-populated states. As a result, in the incoming Congress (excluding the Georgia runoffs), the Democrats will represent at least 20 million more people than the Republicans. But if Republicans win at least one of the Senate seats in Georgia, they’ll have the ability to obstruct any part of the Biden agenda they don’t like—which is to say, all of it.

It’s been a deeply terrible year. The pandemic, the killings of Black people that sparked racial justice uprisings, climate disasters, and a slow-motion coup attempt—destined to fail, but designed to undermine democracy—have all combined to form sort of a rolling nightmare for the United States. In November, Donald Trump’s loss offered a moment of hope, but now that Biden has secured the electoral college vote and even McConnell managed to acknowledge Biden’s victory a mere five weeks after it happened, the threat of a Republican-led Senate looms large. Any short-term solutions, economic aid, or a competent pandemic response, are likely to be hampered by McConnell’s greed, partisan blindness, and utter disregard for the welfare of the American people. Any long-term solutions, fighting climate change or expanding healthcare access, would be dead-on-arrival. The GOP has already signaled that the party plans to obstruct the Biden administration any chance they get. As bad as 2020 has been, the Republicans in the Senate are poised to make 2021 just as bad—or, hard to imagine but it’s possible, even worse.