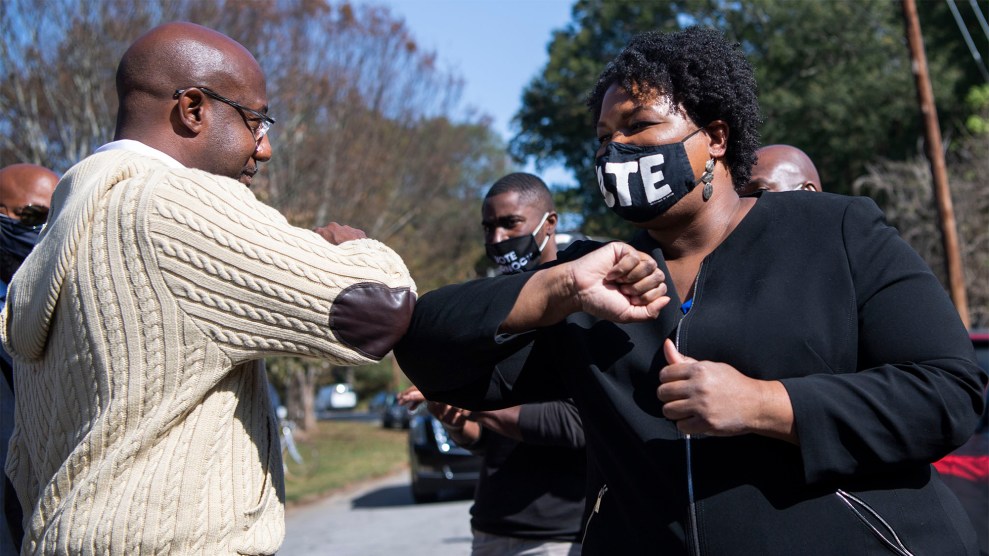 On November 16, 2018, when she ended her bid to become Georgia’s governor, Stacey Abrams listed the many problems that had made it more difficult to vote in that month’s election: 1.5 million voters purged from the rolls, more than 50,000 put on a “pending” registration list, more than 200 polling places closed, thousands of mail ballots rejected, and waits of up to five hours to cast a ballot—tactics that disproportionately harmed voters of color. “Democracy failed Georgians,” Abrams declared.

Nineteen months later, the state had an even worse election meltdown during its June presidential primary. Voting machines malfunctioned, 80 more polling places were closed in metro Atlanta, thousands of mail ballots never arrived or were rejected, and wait times at predominantly Black and Latino precincts were more than six times longer than in majority-white areas.

“2018 was the cake, the primary of 2020 was the icing in terms of the problems,” says LaTosha Brown, co-founder of Black Voters Matter, who lives in Atlanta and works to mobilize Black voters in the South.

But in the November 2020 election, democracy, improbably, worked in Georgia. The state saw its highest turnout in 40 years. Democrats have believed for some time that a rapidly diversifying electorate would allow them to be competitive in Georgia, but repeated voter suppression efforts had kept that electorate from fully forming. Now, two years of determined organizing against voter suppression created the conditions for Joe Biden to carry the state by just under 12,000 votes, making him the first Democratic presidential candidate in 28 years to win Georgia.

“There were still long lines, there were still problems with absentee balloting,” says Lauren Groh-Wargo, CEO of the voting rights group Fair Fight Action and Abrams’ campaign manager in 2018. “But the collective work on litigation, advocacy, voter education, voter suppression mitigation that we and so many allies did really ensured that there was a multi-ethnic, multi-racial coalition that could come out to support Joe Biden.”

That electorate—along with the organizing that spurred it—is now giving Democrats hope that Raphael Warnock and Jon Ossoff can win runoff elections for the US Senate on January 5, races that would have seemed almost unwinnable in past years.

A host of Black-led organizing groups, from Fair Fight to Black Voters Matter to the New Georgia Project, channeled their anger over what happened in 2018 into concerted efforts to remove barriers to the ballot box. Brown compared it to a scene in the ESPN documentary The Last Dance where Michael Jordan loses a key playoff game and shows up to practice the next day furiously motivated. “We took the energy of what happened to us with voter suppression and literally redirected that energy to be a motivating factor to organize and energize people,” she says.

The electorate in 2020 was the one Abrams envisioned in 2018. People of color made up nearly 40 percent of all voters, and Biden won roughly 70 percent of their votes. He improved on Abrams’ margin in eight counties in metro Atlanta, building a remarkably diverse coalition of new voters, young voters, people of color, and moderate white suburbanites. According to an analysis by the Democratic data firm Target Smart, Asian American turnout increased by 91 percent from 2016 to 2020, Latino turnout by 72 percent, and Black turnout by 20 percent, while white turnout grew by just 16 percent.

Between 2016 and 2020, 1 million new voters were registered through Georgia’s system of automatic voter registration at motor vehicle offices and registration drives by grassroots groups. Two-thirds of them were people of color. Amazingly, the number of eligible but unregistered Georgians fell from 22 percent in 2016 to just 2 percent in 2020.

In addition to high-profile organizing work by Abrams and her allies, many restrictive voting rules that led to disenfranchisement in 2018 were also reformed through litigation and advocacy.

In 2020, it was harder for election officials to throw out mail ballots for mismatched signatures, and voters had a chance to fix problems with their ballots after Election Day. In 2018, Black and Latino voters were more likely than white voters to have their mail ballots rejected, and young voters were more likely than older voters. The overall rejection rate for mail ballots fell from 3.4 percent in 2018 to just .2 percent in November.

Counties in metro Atlanta processed absentee ballots more quickly and made their designs less confusing. When the secretary of state removed 300,000 voters who he claimed had died or moved from the rolls in December 2019, Fair Fight sued and reinstated 22,000 voters who were still eligible to vote. A law mandating that early voting locations be in government buildings was repealed, allowing the Atlanta Hawks’ arena to become a massive polling place in downtown Atlanta.

In addition to expanding voter access, groups like Fair Fight contacted 1 million voters a week urging them to make a plan to vote early, either in person or by mail. “When I would go to the polls, I would hear, ‘We’re not going to let them steal this one,’” says Brown. “That’s why I think you had so many people vote early.” Eighty percent of Georgians voted early, leading to many fewer problems on Election Day. It was by no means perfect—there were 11-hour lines on the first day of early voting in Atlanta—but people stood in line to make sure their votes were counted.

The record turnout in 2020, the organizing efforts against suppression, and the diverse coalition that elected Biden is giving Democrats hope in runoff elections where the party usually faces steep odds. Runoff elections were instituted in the early 1960s, before the passage of the Voting Rights Act, specifically to disenfranchise Black voters. In 1963, after the Supreme Court struck down an electoral system in Georgia that gave conservative rural counties far more power than moderate urban ones, a segregationist state representative named Denmark Groover fretted that “all we have to have is a plurality and the Negroes and the pressure groups and special interests are going to manipulate this State and take charge.” So he introduced a new system where no candidate could win without an outright majority of the vote. If no candidate reached 50 percent, a runoff would ensue—“as a means,” Groover said, “of circumventing what is called the Negro bloc vote.”

Ever since, the electorate in runoffs has been smaller, older, whiter, and more Republican than in general elections. Since the 1990s, Democrats have won only one of seven statewide runoffs in Georgia. In 1992 and 2008, Democratic US Senate candidates lost when turnout dropped more than 40 percent from the general election. In 2018, Democratic secretary of state candidate John Barrow trailed Republican Brad Raffensberger by just 16,000 votes in the general election. He lost the runoff by 55,000 votes, with turnout only a third of the November number.

Getting voters back to the polls in early January is no easy task: The runoff comes right after the holiday season, COVID-19 cases are spiking, and many voters are fatigued after a never-ending presidential election. “We’re trying to talk to Southerners over Thanksgiving, Chanukah, Christmas, New Year’s, Festivus for the rest of us,” says Nsé Ufot, executive director of the New Georgia Project, which Abrams founded in 2014. “Competing with the noise is a huge hurdle.”

But whereas Democrats—and young and Black voters in particular—were deflated after Abrams’ loss in 2018, Ufot says they’re energized this year. “The results of the general have helped better than any cute meme,” she says. “Having the entire country wait with bated breath while Georgia’s returns come in, having the margin be so small, and then confirmed in recount after recount, has done more than anything to combat the narrative that my vote doesn’t matter.”

Far more money, manpower, and organizing resources have poured into Georgia—to both candidates and outside groups—than in a typical runoff. Fair Fight alone has raised more than $34 million in roughly the span of a month. Marisa Pyle, an organizer with Fair Fight, compared the Senate races to Doug Jones’ Senate victory over Roy Moore in Alabama in December 2017, which was powered by high Black turnout and crossover voting among moderate whites in a deep-red state. “It was a race that got a lot of national attention, around the same time of year, in a state in the South that is comparable to Georgia,” she said.

Fair Fight has recruited more volunteers for the runoffs than it did in the run-up to November. “If anything, there’s been an increase in enthusiasm,” Pyle said. The group usually had between 800 to 2,000 volunteers during weekends of action during the general election, but in the first weekend after Georgia’s presidential race was called, it trained 5,700 new volunteers, who contacted 1.6 million voters by phone or text, urging them to make a plan to vote.

Similarly, the New Georgia Project plans to knock on 1 million doors by the end of the year, and text and call 5 million voters. It registered 10,000 new voters in the month after the election.

This organizing work seems to be paying off. A million mail-in ballots have been requested for the runoff, an impressive number considering that 1.3 million people voted by mail in November. “I don’t think we’ll approach the numbers for the general, but I do think we’ll exceed turnout rates for any runoff we’ve seen in recent Georgia history,” Ufot says.

The Georgia Republican Party, meanwhile, is in the midst of a full-scale civil war, with GOP Senators David Perdue and Kelly Loeffler calling on Raffensberger to resign and Trump slamming Gov. Brian Kemp for refusing to pursue bogus claims of voter fraud. Republican senators refused to urge Trump to concede to Biden because they reportedly didn’t want to alienate his red-meat base in Georgia, but that strategy seems to be backfiring, with Trump-allied lawyers Lin Wood and Sidney Powell telling Republicans not to vote for Perdue and Loeffler in the runoffs because the general election was rigged.

“They have not earned your vote,” Wood said at a raucous rally in suburban Atlanta last week, where Trump voters chanted “lock him up” about Kemp. “Don’t you give it to them. Why would you go back and vote in another rigged election, for god’s sake?”

While Republicans are melting down, Democrats and Black organizers are focused on electing a majority in the US Senate that can pass Biden’s legislative agenda. “Georgia is ground zero for voter suppression,” says Brown. “And now it will be the state to determine the policy and leadership direction of this country.”