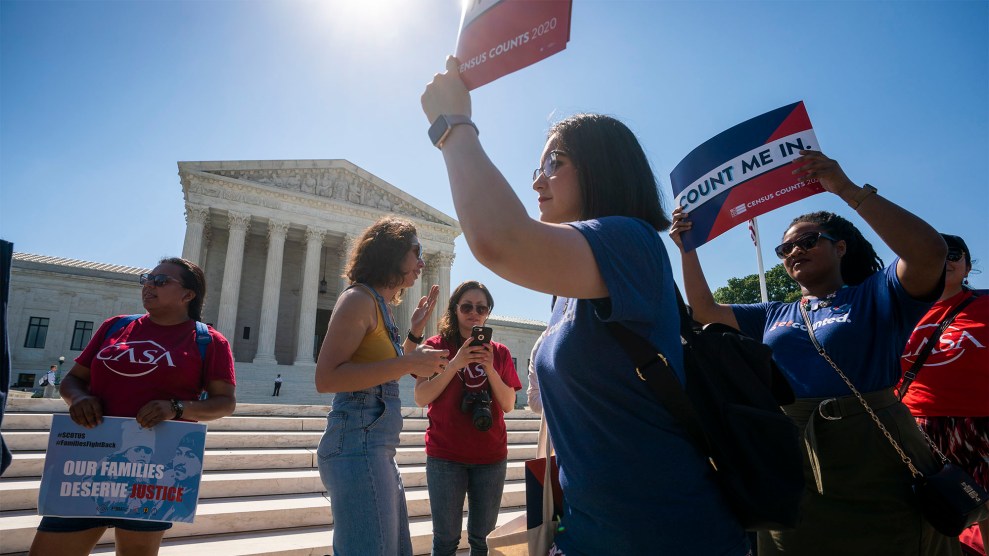 Demonstrators gather at the Supreme Court to protest the Trump administration's plan to add a citizenship question to the 2020 census in June 2019.J. Scott Applewhite/AP

The Supreme Court on Friday threw out a challenge to President Donald Trump’s plan to exclude undocumented immigrants from the census count used to determine representation for the House of Representatives.

But the unsigned 6–3 opinion was not a clear victory for Trump. The six conservative justices ruled against the ACLU and a group of Democratic-led states because they said it was unlikely the Trump administration would succeed in identifying a large number of undocumented immigrants to exclude from the census count or that the Census Bureau would be able to send that information to the president before Trump leaves office.

“The policy may not prove feasible to implement in any manner whatsoever,” the six justices wrote. “Here the record is silent on which (and how many) aliens have administrative records that would allow the [Commerce] Secretary to avoid impermissible estimation, and whether the Census Bureau can even match the records in its possession to census data in a timely manner.” They added, “Everyone agrees by now that the Government cannot feasibly implement the memorandum by excluding the estimated 10.5 million aliens without lawful status.”

After losing his bid to put a question about US citizenship on the 2020 census, Trump issued an executive order last year to collect citizenship data through government records. He then issued a memorandum in July 2020 to exclude undocumented immigrants from the census count used for House apportionment, a move that would reduce representation for states with a large number of immigrants and boost representation for whiter and more Republican states. The plan almost certainly violates the 14th Amendment, which requires the “whole number of persons in each state” to be counted for congressional representation.

But the court’s majority did not reach a verdict on the merits of the case, and during oral arguments even some conservative justices expressed skepticism that Trump’s policy was constitutional.

“A lot of the historical evidence and longstanding practice really cuts against your position,” Justice Amy Coney Barrett, Trump’s latest Supreme Court appointee, told Trump’s acting solicitor general. “Illegal aliens have never been excluded as a category from the census.”

That suggests that if Trump were able to succeed in excluding undocumented immigrants from congressional apportionment, the move would likely be struck down as unconstitutional if challenged again. But Trump may not even be able to try, since the Census Bureau has discovered errors in the census count that could keep it from sending any census data to the president before he leaves office, allowing Biden to reverse the policy. The House of Representatives, which has the final say over the census, could also reject the data as flawed.

Nonetheless, three liberal justices dissented and said the court should strike down the policy right away. “Where, as here, the Government acknowledges it is working to achieve an allegedly illegal goal, this Court should not decline to resolve the case simply because the Government speculates that it might not fully succeed,” wrote Justice Stephen Breyer, who was joined by Elena Kagan and Sonia Sotomayor.