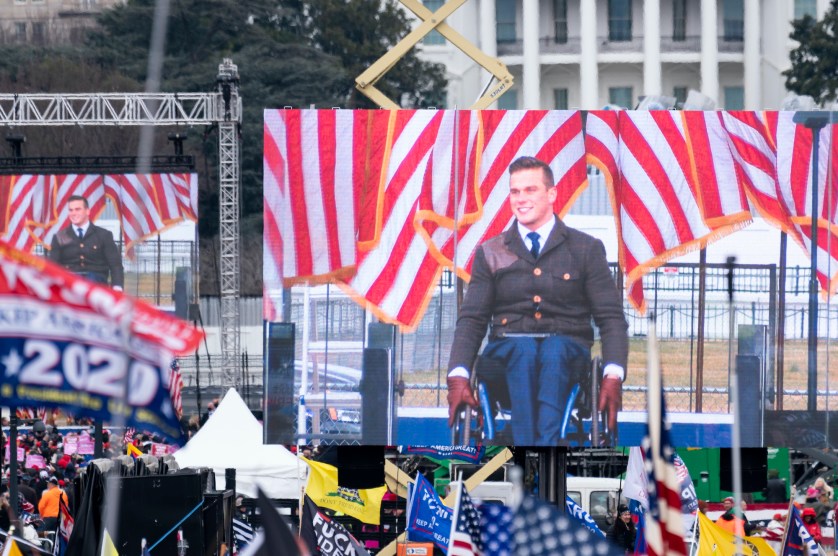 Rep. Madison Cawthorn speaks to Trump supporters from the Ellipse at the White House in Washington.Bill Clark/AP

Before a mob stormed the Capitol on January 6, Alabama Rep. Mo Brooks stood on the ellipse near the White House and gave the pro-Trump crowd who had gathered there his enthusiastic encouragement for their movement to challenge the election. “I’ve got a message that I need you to take to your heart and take back home, and along the way stop at the Capitol,” he said, urging MAGA supporters to join him in resisting what he described as an attack by socialist Democrats on the country. “Today,” he continued, “is the day American patriots start taking down names and kicking ass.” Hours later, insurrectionists breached the Capitol, interrupting the election certification and forcing lawmakers to evacuate. Five people have died in connection to the riot.

Brooks, who has served in Congress since 2011 and was one of the first members to challenge the Electoral College votes, wasn’t the only GOP lawmaker to join President Donald Trump’s rally on Wednesday. Twenty-five-year old Rep. Madison Cawthorn from North Carolina, the youngest member of Congress, also addressed the crowd from the stage before the president’s appearance. “When I look out into this crowd, I can confidently say this crowd has the voice of lions,” Cawthorn said, less than a week after being sworn into office. The day before, another newly elected representative and the first member of Congress who openly supports the QAnon conspiracy group, Georgia Rep. Marjorie Taylor Greene, told protesters at another Stop the Steal rally that she refused to certify “fraudulent Electoral College votes for Joe Biden.”

“When I look out into this crowd, I can confidently say this crowd has the voice of lions.”

All these members of Congress relied on tens of thousands of dollars in political contributions from businesses to help earn their seats. Following the deadly attack, US companies are increasingly reassessing their support. More than a dozen have announced they would be halting political donations altogether to several of the 139 House and eight Senate Republicans who voted to oppose the Electoral College results. Marriott International, Amazon, and American Express are among the businesses that have decided to pause political giving to GOP members who opposed the certification of President-elect Joe Biden’s election victory.

Other corporations like Facebook and Microsoft have decided to temporarily suspend all PAC contributions pending a review of their policies. Sen. Josh Hawley (R-Missouri), who pumped his fist at rioters outside the Capitol, has emerged with Sen. Ted Cruz (R-Texas) as the most prominent “enablers” of the insurrection, and the corporate backlash was swift and unambiguous. The greeting card company Hallmark, which is headquartered in Hawley’s home state, asked him and Sen. Roger Marshall of Kansas to return employee campaign donations, saying their actions “do not reflect our company’s values.”

Now, other representatives of the group dubbed the “Seditious Caucus,” such as Brooks and Cawthorn who got even closer to the insurrectionist mob, are seeing calls for their resignation mount—along with the pressure on corporations funneling dollars to them to take a stand. A number of them already have.

Giant defense contractors are among the top donors to Brooks, a member of the House Armed Services and Science, Space, and Technology committees. Boeing, Northrop Grumman, and Lockheed Martin, three of the sector’s largest in the world, have each donated $10,000 to the Republican in the 2020 election cycle alone. Other defense companies like Raytheon Technologies and Honeywell International have also given thousands of dollars to the Alabama politician. Combined, the leading three defense contractors’ 2020 PAC donations to both House and Senate GOP objectors amounted to more than $1,900,000. Northrop Grumman halted their political action committee giving on Monday, and were soon followed by Raytheon, Boeing, and Lockheed.

Since Brooks first ran for office in 2010, he has benefited from $36,000 in contributions from the PAC of Blue Cross and Blue Shield of Alabama. The association that licenses health insurance companies in states throughout the country issued a statement on January 8 stating they would “suspend contributions to those lawmakers who voted to undermine our democracy.” According to an internal email obtained by the Hill, the association also said it would not give its annual contribution to the National Republican Congressional Committee (NRCC).

Thank you, @BCBSofAlabama, for publicly promising to stop donating to @RepMoBrooks and all the others who objected to the certification of the Electoral College vote. Your integrity on this is noted and appreciated.

After the violence, Brooks attempted to minimize his role in urging Trump supporters to storm the Capitol. A statement he released to the media on Tuesday appears to be no longer available. But two Democratic representatives have introduced a resolution to formally censure the congressman, saying he incited “acts of insurrection that resulted in injuries and loss of life.”

Corporate America has also helped elect Cawthorn, who drew national attention after his surprising defeat of Trump’s pick in the primary runoff for the GOP nomination in North Carolina’s 11th Congressional District. Running on a “pro-Trump, pro-life, and pro–Second Amendment” platform, in November, he defeated the Democratic nominee, retired Air Force Colonel Moe Davis. As part of his successful—and controversial—campaign, Cawthorn received sizable contributions from PACs associated with Minnesota-based American Crystal Sugar, the largest beet sugar producer in the country, and with Trump supporting Home Depot—$10,000 and $5,000, respectively, according to data compiled by OpenSecrets. The Exxon Mobil and AT&T PACs also donated to the candidate, who has also received support from the NRCC.

The point is not what you or I or anyone thought of Mo Brooks et al when donors like Alabama Power and Southern Co. and Blue Cross etc etc contributed to them in the past.

The issue will come when and if they choose to contribute to them again.

A number of other companies that have been criticized for directing contributions to Cawthorn through PACs, include Ford Motor, North Carolina’s electric power holding company Duke Energy, and health insurer Cigna, which issued a statement this week that said: “There is never justification for violence or destruction like we saw at the U.S. Capitol. The CignaPAC will discontinue support of elected officials who encouraged or supported violence, or hindered the peaceful transition of power.”

“The CignaPAC will discontinue support of elected officials who encouraged or supported violence, or hindered the peaceful transition of power.”

Besides potentially being hit by corporate desertion, Cawthorn, once described as a rising star and potential future of the Republican Party, seems also to be losing the support of fellow Republicans who have endorsed him in the past. After watching the rally speech, former Henderson County Sheriff George Erwin Jr. said he declined a role as Cawthorn’s district director and that he was wrong to have encouraged other law enforcement to back him as a candidate.

More than 25,000 people have signed an online petition asking Cawthorn to resign over his debunked election fraud claims and role in inciting the rioters. Local Democratic officials have called for an ethics investigation into Cawthorn’s “seditious behavior.” After the attack, the freshman congressman, who weeks earlier had told an audience to “lightly threaten” lawmakers to support “election integrity,” criticized the violence but denied any responsibility. Cawthorn reportedly told the Smoky Mountain News that “fortunately, I was armed” inside the Capitol.

While Rep. Paul Gosar might have not attended the rally, he is facing scrutiny for allegedly helping plan it. According to the Washington Post, Stop the Steal rally organizer Ali Alexander has said that he was assisted in organizing the event by Brooks, Rep. Andy Biggs (Ariz.), and Rep. Paul Gosar of Arizona. After the Capitol seige, Gosar’s siblings have publicly pushed for his resignation or removal from Congress.

In the most recent election cycle, Gosar received $10,000 in contributions from the Pinnacle West Capital PAC (its donations to the politician add up to almost $60,000 over the last decade), as well as from the Koch Industries PAC, another major donor to Republican election objectors, according to an analysis by the Center for Responsive Politics’ OpenSecrets.

The day before the rally, “Pro-Life, Pro-Gun, Pro-Trump” Rep. Marjorie Taylor Greene, warmed up the crowd at another Stop the Steal rally.

I REFUSE to certify fraudulent electoral votes for Joe Biden.

That’s why I will #FightForTrump and OBJECT tomorrow in Congress!

She has not yet paid any price for her actions around the challenging the election, but her vocal support of the QAnon conspiracy theory prompted the Koch PAC to request a refund of their $5,000 donation. Greene has been backed by gun rights groups like Gun Owners of America.

And a State Lawmaker

Campaign support consequences could also affect some state legislators who participated in the demonstration on January 6. Following the violent insurrection on Wednesday, Republican State Rep. Terri Lynn Weaver of Tennessee posted a picture of the crowd and tweeted “Epic and historic day gathering with fellow Patriots from all over the nation DC.” Later, she told The Tennessean newspaper that she was “in the thick of it,” and there was no violence. In the past, Weaver has received contributions from PACs linked to the private prison company CoreCivic and General Motors, according to the state’s online campaign finance database. A spokesperson said the car company was pausing new contributions.

TN Rep. @TerriLynnWeaver was protesting in D.C. when the U.S. Capitol was stormed, members of Congress were forced to run for cover and a woman was killed. This is her tweet about Jan. 6, 2020. pic.twitter.com/cvaL6E59EI