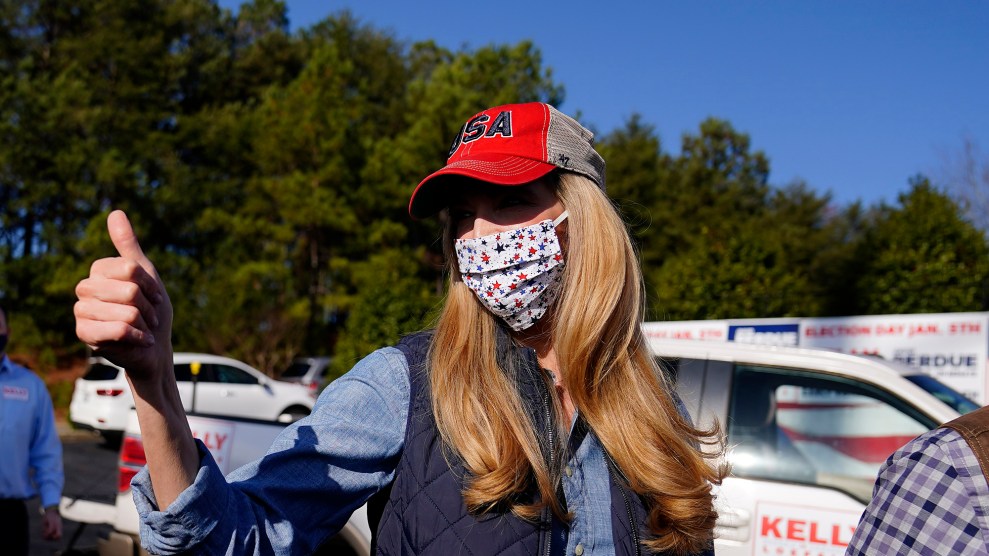 In the final days of campaigning for reelection to her US Senate seat, Kelly Loeffler is not going to let little things like “the truth” inform her remarks on the trail.

Let’s take this step-by-step. Loeffler has repeatedly invoked vague allegations that Warnock “has been involved in child abuse,” a wink to the conspiracists of QAnon. She’s referring to a 2002 incident in which Warnock, at the time a pastor at Douglas Memorial Community Church in Baltimore, and a youth minister were arrested and charged with trying to prevent a state trooper from interviewing teen counselors during an investigation into alleged child abuse at the church’s camp. Neither Warnock nor the youth minister was a suspect. Politifact notes:

Warnock said he was charged when he asserted that lawyers should be present during the teens’ interviews.

On Oct. 30, 2002, a judge dismissed the charges. The dismissal came at the request of a prosecutor, who said: “What we decided was there was some miscommunication that had occurred with them. They were very helpful with the continued investigation. It would not have been a prudent use of resources to have prosecuted them.”

So the child abuse “involvement” Loeffler likes to invoke is simply that Warnock did not want teens interviewed by the police without someone there to represent them, which makes sense, given the power dynamics.

The domestic abuse allegations Loeffler is referring to did get some extra pickup a couple weeks ago, when Fox News’ Tucker Carlson, the great furrowed brow of white grievance, aired a video from last March in which Warnock’s ex-wife, Ouleye Warnock, called her former husband “a great actor” in police footage that was taken in the aftermath of a domestic dispute. In March, Warnock’s ex-wife has alleged, the pastor ran over her foot with his car after an argument over whether he would allow her to apply for passports and take their two children to West Africa to attend her grandfather’s funeral. (The two were estranged at the time; they would divorce in May.) Warnock told police that she refused to close the right rear passenger door of his car so that he could leave, and so he began to “slowly” drive forward when he heard her exclaim that he had driven over her foot.

According to the police report, she was taken to the hospital but first responders were not able to find any sign of injury.

As far as “the lawyer for Harvey Weinstein” stuff goes, Loeffler is referring to David Boies, whose firm, yes, has defended some monsters, Weinstein included. The donation is $6,000, made to the Georgia Federal Elections Committee, a PAC that supports Warnock and Jon Ossoff’s run for US Senate. In the general election, Boies’ law firm donated $16,000 to…Matt Lieberman, who was criticized for potentially splitting the Democratic vote and forcing Warnock into a runoff with Loeffler.

Meanwhile, a record 3 million Georgia voters cast ballots in early voting. According to an analysis by the Atlanta Journal-Constitution, “more ballots have been cast so far by groups and in areas that tend to favor Democrats.”