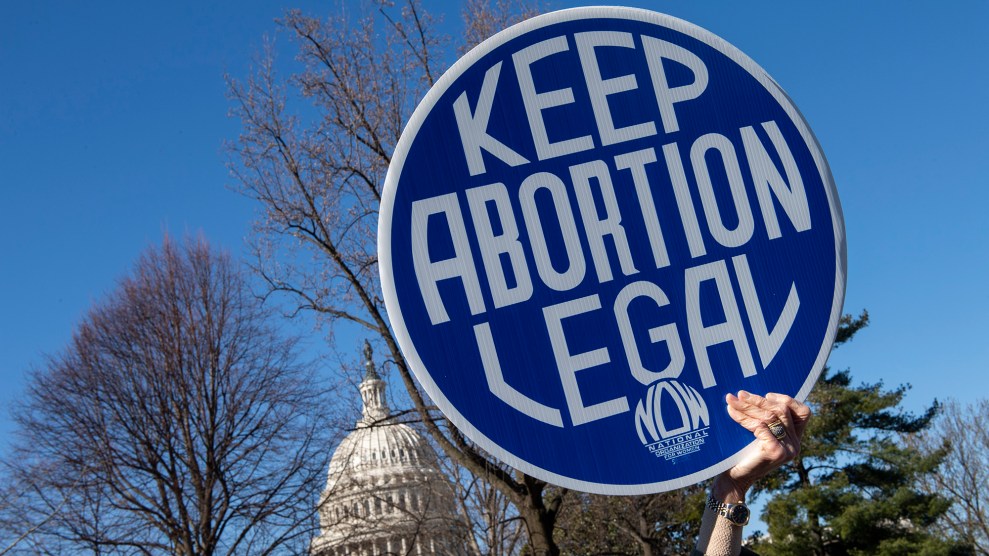 Activists protest outside the Supreme Court on March 4, 2020, as it hears oral arguments regarding a Louisiana law about abortion access. Caroline Brehman/AP

The Supreme Court issued its first abortion-related ruling since Justice Amy Coney Barrett took the bench in the fall, and it’s a win for abortion foes. The justices ruled to reinstate a federal restriction on medication abortion, one that requires women pick up the medication in person; the regulation had been temporarily lifted in July to reduce the potential spread of the coronavirus.

The Supreme Court’s timing couldn’t really be worse: The United States is experiencing a new horrible peak in the pandemic right now, as the United States has begun to average 3,000 deaths per day due to the virus.

Now, people seeking medication abortion will once again have to go in-person to a health center to pick up the medication and sign a disclosure form. The order was brief and unsigned, with Justices Stephen Breyer, Elena Kagan, and Sonia Sotomayor dissenting. Chief Justice John Roberts wrote for the majority that the Court was not considering whether the federal restriction constitutes an “undue burden” on those seeking an abortion, but rather “whether the District Court properly ordered the Food and Drug Administration to lift those established requirements because of the court’s own evaluation of the impact of the COVID–19 pandemic.” Essentially, Roberts said, this should fall under the purview of public health experts who are more intimately familiar with the pandemic, rather than the Court. Sotomayor’s dissent, which was joined by Kagan, argues that the restriction is an undue burden and that the government has failed to demonstrate “irreparable harm” caused by the temporary allowance, which should be the standard for reinstating the policy during the pandemic.

Sotomayor also took the government to task for the way in which it argued its case for the restriction. She writes:

What rejoinder does the Government have to the possibility that refusing to suspend the FDA’s in-person requirements for mifepristone during the COVID–19 pandemic will cause some women to miss the 10-week window [in which medication abortion is legal] altogether? No cause for concern, the Government assures this Court, because even if the FDA’s in-person requirements cause women to lose the opportunity for a medication abortion, they can still seek out a surgical abortion. What a callous response.

The timing of the Court’s decision is particularly stunning given the state of the COVID-19 crisis, as ICUs fill back up and medical staffs are once more overwhelmed. Early on in the pandemic, telemedicine was hailed as a simple solution to providing day-to-day care without putting more people at risk for infection. Then, abortion providers and advocates called for more access to medication abortion administered via telemedicine, which studies show is just as safe as in-person services. As I reported:

There’s the obvious social distancing it allows (though states have different regulations regarding where telemedicine appointments can take place and who must be present to preside over them). But Dr. Daniel Grossman, the director of the research group Advancing New Standards in Reproductive Health, points out another key, though less readily apparent benefit: In a pandemic, hospitals in particular are forced to prioritize infected patients, which may mean abortion care gets de-prioritized, despite the time-sensitive nature of the procedure. Telemedicine allows abortion providers to bridge the gap.

In an interview, Grossman called telemedicine “the perfect solution” for women looking to terminate early pregnancies. “Unfortunately, it’s burdened by the restrictions in 18 states that completely ban telemedicine abortion care and then it’s also restricted due to the Risk Evaluation and Mitigation Strategy for mifepristone, which limits the possibility of doing direct to patient telemedicine,” Grossman said, referencing the Food and Drug Administration’s classification of mifepristone, the first of two medications taken to induce abortion, as a high-risk drug, despite its extraordinarily high safety profile.