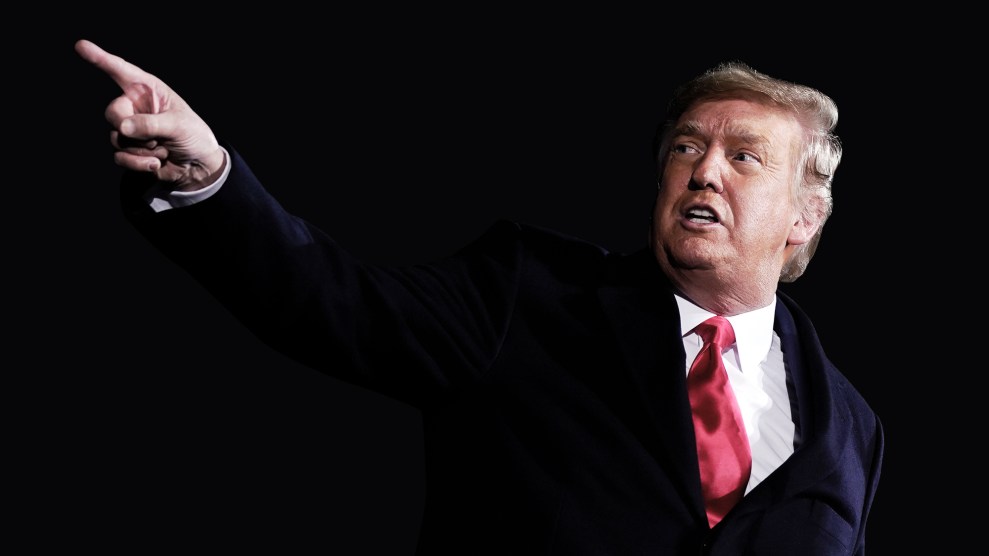 The day after Christmas, Donald Trump tweeted a familiar theme with an ominous new twist: He suggested that the “Rigged & Stolen” 2020 presidential election, as he called it, could be considered “an act of war, and fight to the death.”

Trump’s bluster drew virtually no media coverage, perhaps because of the holiday break, and perhaps also because his incendiary language was cleverly veiled. His tweet in fact targeted Mitch McConnell, blasting the Republican majority leader for not helping him to overturn the election results and arguing that if the tables were turned, Democratic senators would see the situation as a violent existential showdown.

Attributing his call for “war” to hypothetical Democrats was just Trump’s latest use of a tactic known as stochastic terrorism, a method by which the instigator provokes random extremist violence beneath the guise of plausible deniability. In the two months since his loss to President-elect Joe Biden, Trump has escalated his campaign of incitement, one that national security experts warn will lead to rising political violence. Those concerns have run especially high in recent days as Trump has rallied his most fervent supporters to Washington, DC, for his effort to torpedo the certification of Biden’s win by Congress.

The media and political world have been intensely focused on the unfolding constitutional crisis sparked by Trump and his Republican surrogates in the Senate, notes Juliette Kayyem, a former assistant secretary in the Department of Homeland Security, “but in between all of that are clear signals about the kind of activity that Trump would be more than happy to have,” she says. “His tweets and that language are heard by his people as a sign that he’s under siege and needs their battle-readiness. And some percentage are going to listen to that.”

“The term ‘dog whistle’ is too benign here. This is an understanding of how language is going to be interpreted for action.”

Stochastic terrorism historically was understood as a method used by Islamist terrorist groups and anti-abortion religious extremists, according to Kayyem. Trump took the phenomenon into unprecedented territory: the presidency. “The term ‘dog whistle’ is too benign here,” she says. “This is true incitement. This is an understanding of how language is going to be interpreted for action.”

Since mid-December, Trump has repeatedly called for his supporters to descend on Washington: “Statistically impossible to have lost the 2020 Election,” he tweeted. “Big protest in D.C. on January 6th. Be there, will be wild!” The election was “the biggest SCAM in our nation’s history,” he said in another tweet, adding: “Never give up. See everyone in D.C. on January 6th.” In recent weeks, Trump also repeatedly promoted a foreboding nine-minute video narrated by an Ohio jewelry auctioneer connected to the pro-Trump propaganda outlet Epoch Times. Titled “The Plot to Steal America,” the video railed against an alleged Chinese communist conspiracy involving Biden, the Democrats, and American media and called for Trump supporters to mobilize: “We know good from evil, and truth from lies, and we know that our rights don’t come from the government, but from God,” the narrator declared. “And we will fight to the death to protect those rights.”

Violent far-right extremist groups including the so-called Proud Boys have been boasting for weeks on social media about heading to the nation’s capital armed and using guerrilla tactics to go after anti-fascist protesters they often clash with known as “antifa.” The leader of the Proud Boys—a group Trump infamously said during a fall presidential debate should “stand back and stand by”—was arrested on Monday in Washington for his role in the burning of a church’s Black Lives Matter banner the last time the gang gathered in the nation’s capital in mid-December, and was further charged with unlawful possession of ammunition. During protests in DC and elsewhere last month, members of the Proud Boys were involved in beatings, stabbings, and a shooting.

A growing number of former national security officials have been sounding the alarm about Trump’s rhetoric. Olivia Troye, a top aide to Vice President Mike Pence until last August, said in an interview on MSNBC in late December that she was “very concerned” about imminent violence, “because the president himself is encouraging it.” “This is what he does. He tweets. He incites it. He gets his followers and supporters to behave in this manner, and these people think that they’re being patriotic because they are supporting Donald Trump,” said Troye, a counterterrorism expert. “This is all out of control,” she added, as Trump “continues to stoke the flames of these extremely far-right people who show up and think he’s calling out to them.”

According to Washington Post columnist Jennifer Rubin, concern over how Trump might seek to exploit street violence in his final days as president was a key reason that the 10 living former defense secretaries warned in an extraordinary op-ed on January 3 that the US military should never be used to resolve election disputes. “An individual directly involved in putting together the op-ed told me that my colleague David Ignatius’s column warning of the potential for violence and Trump’s deployment of the military ‘made everyone nervous and led them all to want to put a shot across the bow since Trump is unpredictable,’” Rubin reported. “The individual added that ‘they all fear, I think, that he or his minions might take some action to try to overturn the election or stay in office beyond his term.’” (In early December, pardoned felon and former Trump adviser Lt. General Michael Flynn promoted the idea of Trump using martial law to force a new presidential election.)

At the outset of a rally on Monday night in Georgia ostensibly to boost the two Republican candidates in that state’s crucial Senate runoffs, Trump reiterated defiantly that he would remain president for four more years with the help of his supporters. “They’re not taking this White House,” he told the crowd, “We’re going to fight like hell, I’ll tell you right now.”

By late Tuesday, with Trump supporters converging on the nation’s capital for the Wednesday rally, the city began to see pockets of chaos. The president had welcomed the activity with a fresh tweet: “Washington is being inundated with people who don’t want to see an election victory stolen by emboldened Radical Left Democrats. Our Country has had enough, they won’t take it anymore! We hear you (and love you) from the Oval Office. MAKE AMERICA GREAT AGAIN!”