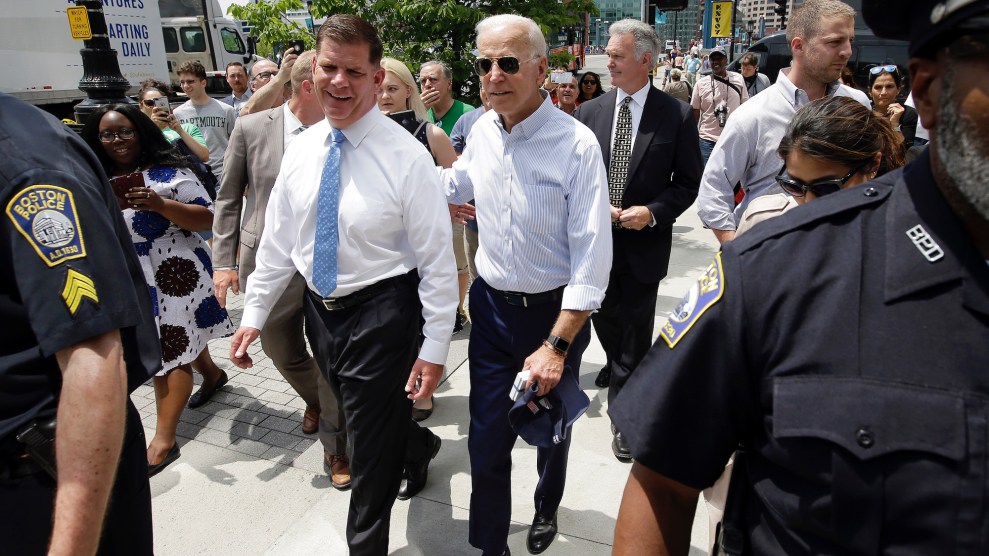 President Donald Trump treated the labor seat in his cabinet like a sop to the executive class. By picking Boston mayor and former union leader Marty Walsh to lead the Department of Labor, President-elect Joe Biden has signaled an intention to give worker interests a place at his policy-making table.

Trump infamously tapped fast-food magnate Andy Puzder for the job, whose nomination ultimately collapsed under the weight of his anti-worker advocacy and sexist marketing campaigns. In 2019, Trump turned to “management-side” labor lawyer and corporate lobbyist Eugene Scalia for the role. When the coronavirus pandemic exploded in 2020, Scalia steadfastly rejected pleas from labor unions, occupational-safety experts, and US senators, to force employers in frontline industries to put in place emergency protective measures like strict social distancing and provision of masks—even as the virus ripped through meatpacking plants, farms, medical facilities, and supermarkets, killing hundreds of workers and exposing surrounding communities to the pathogen. Meanwhile, Scalia pushed to limit access to to federal unemployment benefits and publicly advocated against extending $600 weekly in federal unemployment payments after the CARES Act expired at the end of July.

Marty Walsh, the son of Irish immigrants who rose through the ranks of Boston’s Building and Construction Trades union before entering politics, presents quite a sharp contrast to Scalia, the son of the late right-wing Supreme Court Justice Antonin Scalia. Labor and worker-safety advocates applauded the pick.

The Walsh appointment “sends a clear message that this administration is ready to fight for America’s frontline workers,” Marc Perrone, president of the the United Food and Commercial Workers International Union, said in a statement. The UFCW represents hundreds of thousands of workers in two of the industries hardest-hit by the coronavirus: meatpacking and grocery.

Debbie Berkowitz, a program director at the National Employment Law Project, called Walsh a “great supporter of measures to improve worker safety.” During the Obama years, Berkowitz served for six years as a top official in the Occupational Safety and Health Administration, the wing of the labor department responsible for ensuring safe working conditions. She has been a fierce critics of OSHA’s performance during the pandemic, finding in an October analysis of OSHA data that the agency systematically ignoring whistleblower complaints from workers claiming their employees had retaliated against them for reporting unsafe conditions during the pandemic.

As an example of Walsh’s commitment to protecting workers on the job, Berkowitz pointed to his response to a 2016 incident in Boston, when two workers drowned in a trench after a water main burst. Mayor Walsh pushed through what Berkowitz called a “groundbreaking” city ordinance requiring contractors applying for city jobs to report OSHA violations in permit applications, giving the city the ability to deny or revoke a contractor’s permit based on its safety history.

Under Trump, “OSHA has been ripped apart, and workers are fighting for their lives.”

Marcy Goldstein-Gelb, co-executive director of the National Council for Occupational Safety and Health, worked with Walsh for 15 years on worker-safety issues in Massachusetts. Under Trump, “OSHA has been ripped apart, and workers are fighting for their lives,” she said. Mayor Walsh worked in the building trades, and he knows that when you don’t have strong [safety] measures and enforcement in place—if you don’t workers at the table, if you don’t have strong union protections—then, people die,” she said. “And now in the face of COVID, they die in record numbers.”

Since April, Goldstein-Gelb said, Biden has been calling on OSHA to institute an emergency temporary standard to force employers to ramp up efforts to protect frontline workers from COVID. Putting Walsh in charge of the labor department, she said, “shows the administration intends to make good” on that pledge “very soon.”

Bruce Goldstein, president of the advocacy group Farmworker Justice, said that the nation’s largely immigrant farm labor force can also expect better treatment from Walsh than they got from the Scalia labor department, which recently made a rule change that will ultimately ultimately cost farm workers on guest visas an annual $178 million in wages. “Given his background in the labor movement, we are very hopeful that Marty Walsh would return the Department to its mission of supporting workers, including by reversing numerous anti-worker policies that were adopted by the Trump Administration,” he said.

A spokeswoman for Gig Workers Rising, which advocates for people employed by transit and delivery apps like Uber and DoorDash, said that her group’s biggest issue going forward is legislation like California’s recently passed Proposition 22. That hotly contested ballot initiative, buoyed by $200 million in industry funding, allowed these firms to classify their drivers as “independent contractors” rather than employees, limiting workers’ minimum wage protections and exempting them from benefits like time-and-a-half overtime, paid sick leave, and bargaining rights. “Gig Workers Rising is excited to work with Marty Walsh,” she said. “We look forward to the incoming administration properly regulating the tech industry, particularly platform companies who have made clear their plans to replicate anti-worker legislation across the country.”