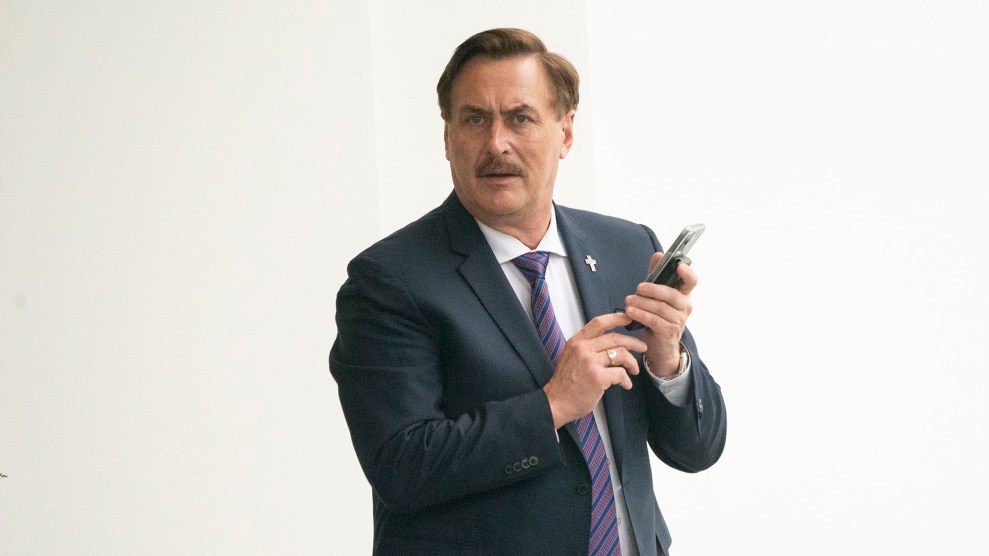 Michael Lindell, inventor of the ''MyPillow'' at the White House in January. Chris KleponisPOOL/ZUMA

One America News Network, the hyper-Trumpy rightwing media outlet, might have just won itself a $1.3 billion defamation lawsuit.

This week the beyond-Fox network aired a pseudo-documentary made by the MyPillow Guy (a.k.a. Mike Lindell) that pushed the not-dead-yet false accusation that a diabolical cabal stole the election from Trump. But OAN broadcast the program as an ad paid for by Lindell and attached the mother-of-all disclaimers to it.

OAN is airing MyPillow CEO Mike Lindell's documentary about how the election was stolen for twelve consecutive hours today.

Here's the disclaimer at the top indicating that it is paid programming, "opinion only," and OAN doesn't endorse statements re: Dominion/Smartmatic. pic.twitter.com/pm4CaduJXc

The disclaimer stated that the program was not the “product of OAN’s reporting” and that the “views, opinions and claims expressed by Mr. Lindell…are not adopted or endorsed by OAN.” This was, according to the note, particularly true regarding Dominion Voting Systems and Smartmatic—the manufacturers of vote-counting machines that have been central to the conspiracy theories promoted by Trump, Rudy Giuliani, Sidney Powell, and Lindell that claim massive election fraud occurred. (Trump cited phony allegations of irregularities with Dominion machines when he called Georgia state officials after the election and pressured them to “find” votes for him.) The disclaimer emphasized that statements about these two companies in this program were “opinion.” But OAN did note that the 2020 election results “remain disputed and questioned by millions of Americans.”

The disclaimer was clearly a ploy. Dominion has filed defamation lawsuits against both Giuliani and Powell claiming over $1.3 billion in damages in each case. Smartmatic has sued Fox News for $2.7 billion. All of these lawsuits contend that Trump’s conspiracy-mongers seriously harmed these companies with their baseless allegations of a global plot—the Chinese communists! Hugo Chavez! the CIA!—to swipe the election for Trump.

It was damn obvious that OAN was trying to save itself from a similar fate. Fox News and Newsmax, another right-wing outlet, tried in their own way to do the same last month, airing embarrassing retractions of their previous promotion of these loony claims. That did not stop Smartmatic from suing Fox.

And the OAN disclaimer might not work. In fact, it might make things worse for this media organization, which in recent years practically made Giuliani a correspondent as he advanced one Trump-aiding conspiracy theory after another. Tom Clare, the lawyer for Dominion, has recently hinted that the firm is not done filing lawsuits. He has publicly said that  Dominion will probably bring cases against other media companies and personalities. The company has sent letters demanding the preservation of records to OAN, Newsmax, the Epoch Times, and several right-wing media personalities, including Sean Hannity, Rush Limbaugh, Maria Bartiromo, and Greg Kelly.

On Friday afternoon, I asked Clare, “What do you make of the OAN disclaimer….Does that afford OAN any protection?” His reply indicates that the disclaimer stunt will likely make things worse for OAN:

“Nice try” by OAN, but it definitely does not relieve them of liability. To the contrary, we warned them specifically and in writing that they would be broadcasting false and defamatory statements of fact if they broadcast the program, and they made the affirmative decision to disregarded that warning and broadcast it anyway. Other outlets have refused to host it. Textbook actual malice.

Malice—that’s often a key element in a defamation or libel case. If Dominion had been leaning toward suing OAN, it appears that airing the MyPillow Magical Conspiracy Theory Show with this disclaimer might settle the matter for the voting machine company. “It’s safe to say OAN is on our list—especially after this debacle,” Clare added. And Lindell himself should probably prepare to hear from the company.
After watching Fox, Giuliani, and Powell be hit by these mega-lawsuits—which make the compelling case that the unfounded allegations severely damaged these firms’ business prospects and also created security risks for their employees—why would OAN have proceeded with such a risky move? Is its loyalty to Trump suicidal? Or did it just need the pillows?