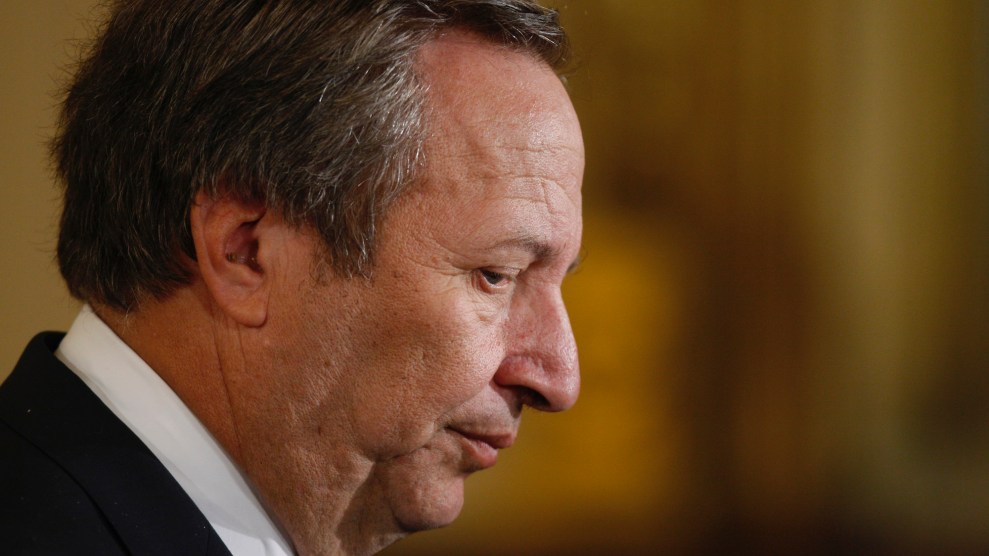 Larry Summers at the White House in 2009.Charles Dharapak/AP

Economist Larry Summers has been the kingpin of every economic calamity Democrats have weathered over the last three decades. But Barack Obama’s National Economic Council chair during the Great Recession finds himself as persona non grata this week after penning an op-ed in the Washington Post undermining the $1.9 trillion COVID relief package President Joe Biden is trying to push through Congress.

Summers’ treatise spread from wonk to wonk in the White House with the contagion of a venereal disease—and was about as well-received. One aide characterized the response as “widespread disagreement.” White House economists had already been booked for media hits to discuss the January jobs report, airtime that permitted many administration voices to rebuke Summers in unison. “The president and the administration have a lot of respect for Professor Summers, but we disagree here,” Bharat Ramamurti, a deputy NEC director, told CBS Radio. Jared Bernstein, a progressive labor economist and member of Biden’s Council of Economic Advisors who served alongside Summers in the Obama administration, was less polite. “I think he’s wrong,” Bernstein told CNN on Friday morning. “I think he’s wrong in a pretty profound way.”

Summers’ piece suggested that the proposed $1.9 trillion was far more than the economy required, pointing to a recent analysis from the Congressional Budget Office that suggested the amount is three times larger than the hole it needs to fill. But he also argued against it on political grounds: Passing such a massive relief bill would test the political tolerance for the jobs and infrastructure package Biden has promised to follow, even though poll after poll has shown broad bipartisan support among voters for Biden’s first proposal. Summers called that pending plan the “nation’s highest priority” as he raised concerns about the federal deficit—a factor Democrats have mostly purged from consideration in moments of economic crisis.

Summers also took jabs from Senate Democrats, who have almost uniformly backed the size of the White House’s proposal. During a meeting of Senate chiefs of staff on Friday morning, an aide to Senate Majority Leader Chuck Schumer (D-N.Y.) thanked everyone for maintaining the party line, acknowledging that some of their bosses believed the package was either too much or not enough, according to a source familiar with the meeting. “And then there’s Larry Summers,” the aide said, “who can’t decide if we’re doing too much or not enough—but knows that, whatever we’re doing, is wrong.”

In a not-so-distant political era when both parties sympathized with deficit hawkery, Summers’ point might have had more purchase. But the administration has maintained there is far more risk in doing too little than too much in its efforts to save the economy from pandemic-induced collapse. Summers’ op-ed fell at an especially awkward time for his argument: The Department of Labor’s January jobs report painted a more dire portrait of unemployment than most economists had even predicted, galvanizing the White House’s push for going big.

“One of the lessons from the Great Recession is that you need to not only be big and bold upfront, but you have to take out some insurance against the possibility that other things can go wrong,” says Gene Sperling, who replaced Summers as Obama’s NEC chair in 2011 and has been an informal advisor to Biden. He names the worse-than-expected jobs report and unknown emerging COVID variants as factors that require extra padding. “If you were to ask me how to weigh the risks between a potential surge of inflation versus the potential risk of our labor market getting stuck in the mud, it’s not really a close call.” (Sperling called Summers’ op-ed both “misguided” and “inconsistent” with Summers’ own recent writings that have urged policymakers to ignore the conventional deficit concerns in the midst of economic collapse.)

Indeed, administration officials say Summers’ concerns about inflation resulting from overinvestment don’t apply. The Federal Reserve’s interest rate is currently near zero percent—meaning it’s cheap to borrow—and the country’s inflation rate has remained below 2 percent for the last decade. In their analysis, even a small rise in inflation would introduce little harm. “Where Larry got something importantly wrong is to suggest the administration is being dismissive of any inflationary pressures,” Bernstein said during his CNN appearance.

Summers has long been a loathed figure on the left, beginning with his work to deregulate the banks as President Clinton’s Treasury secretary. When that deregulation reached its predictable conclusion in the Great Recession, Summers, then NEC chair, had stopped economists from proposing a $1.2 trillion economic stimulus package to Obama, based on a political calculation that it was too large to be taken seriously. While Congress proved those fears were well-placed, the nearly $800 billion wasn’t sufficient to pull the economy out of the hole. Progressives blamed Summers for stunting negotiations before they even began—a move Summers now acknowledges but threatens to repeat with his opinion piece. “Why would we listen to an economist who admits he went too small last time if he’s warning us to go small again?” Sen. Brian Schatz (D-Hawaii) tweeted on Friday.

But he’s all the while been a welcome advisor among mainstream Democrats, often defended by former colleagues like Bernstein for being unfairly demonized by the left flank. Summers had initially been one of the economists briefing Biden as the pandemic descended and put the economy in a deep freeze—a fact the campaign kept under wraps until Bloomberg reported his involvement in late April. Summers began to fade from the scene as the campaign shifted its attention to the Build Back Better plan. In August, Summers announced he was leaving politics altogether, a move encouraged—at least in part—by outside pressures.