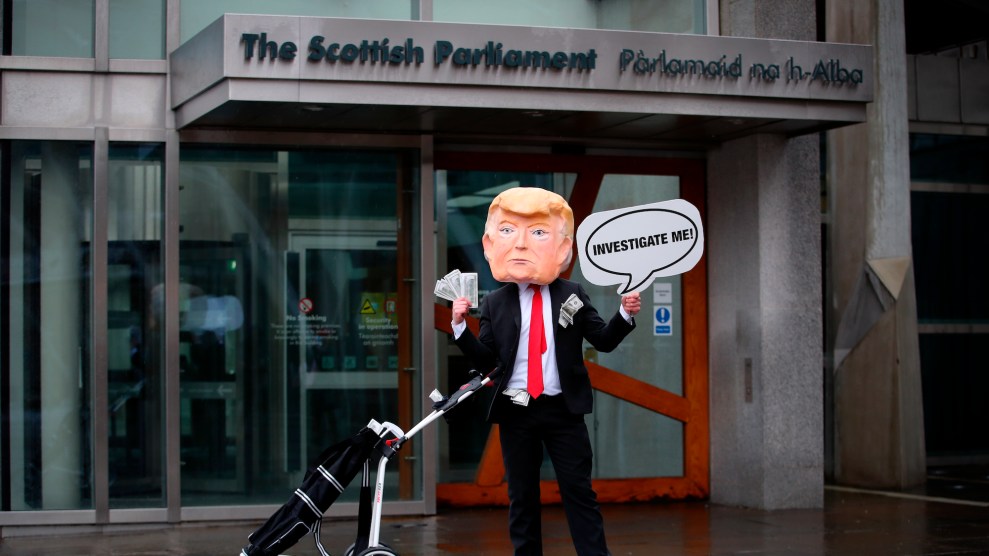 An anti-Trump protester in Edinburgh, Scotland.Press Association via AP Images

The Trump Organization may have dodged a bullet on Wednesday, as the Scottish Parliament rejected a call to launch an anti-money laundering investigation into former president Donald Trump’s Scottish resorts. But even lawmakers who opposed the move expressed visceral loathing for Trump, making it clear he has few friends in a country where his company still has an enormous financial stake.

Trump owns two resorts in Scotland—the legendary Turnberry golf resort, which he bought in 2014, and another in northeastern Aberdeenshire, which he built from scratch starting in 2006. Both courses, but particularly Turnberry, which has a long and storied history, are considered top courses, but neither has come remotely close to turning a profit. In 2020, battered by the COVID-19 pandemic, the Trump courses were plunged even deeper into the red, as they were required to close for much of the year and were all but cut off from wealthy international clients when they were operating. Yet Trump has poured as much as $400 million into the courses since 2006.

Financial experts say Trump’s finances involving the courses are confusing and raise questions about how he was able to afford such lavish investments. As I wrote this past summer:

The size of Trump’s wealth is a source of great debate, but two things are fairly well known—the period between 2006 and 2014 included some of his lowest points, financially speaking, and even in the best of times, the amount he splurged in Scotland would be a ton of cash for him to have on hand, let alone spend so freely. And Trump made these Scottish investments amid a $400 million cash spending spree, documented by the Washington Post, in which he also purchased a golf club in Ireland, five courses in the United States, and several pricy homes.

The New Yorker estimated that Trump would have spent half his available cash on the purchase of Turnberry alone, concluding there wasn’t “enough money coming into Trump’s known business to cover the massive outlay he spent” renovating the property.

And the mystery deepens. Martyn McLaughlin, a Glasgow-based reporter for the Scotsman newspaper, discovered that in 2008 Trump approached a Scottish bank asking for a $63 million loan to buy and renovate a historic hotel overlooking the final hole of St. Andrews, the most famous golf course in the world. The terms he proposed were so ludicrously favorable to him that bank executives concluded Trump was asking for a “free loan,” and doing business with the developer was “too risky.” Meanwhile, Trump was touting his “very strong” cash position and his representatives were telling the Scottish public that he had more than $1 billion available to spend in their country.

For the past year, the Scottish Green Party has been agitating for First Minister Nicola Sturgeon to invoke an Unexplained Wealth Order against Trump. A UWO is a tool that allows for UK government investigations into “politically exposed” people whose known financial situations don’t jibe with property purchases they’ve made. The order has been employed several times in London—for example, examining how the wife of a jailed ex–Azerbaijani government official was able to afford a 16 million-pound shopping spree at Harrods.

On Wednesday, Green Party co-leader Patrick Harvie introduced a formal motion in the Parliament demanding that Sturgeon, a Scottish National Party member, and her government invoke a UWO. Such an order would not be a criminal investigation, but a civil inquiry—albeit one that could lead to criminal charges or seizure of Trump properties if wrongdoing were found.

“The threat he brought to Congress a few weeks ago are no means limited to the US.”

Harvie said that even though Trump has left office, he remains a person who deserves close scrutiny. “He became and remains a political danger, not only in the US but globally,” Harvie said. “He’s used his platform to promote fascists in this country, he still has links to far-right politicians here, so the threat he brought to Congress a few weeks ago are no means limited to the US.”

Harvie added that he suspected his government wouldn’t be so shy about launching an investigation if the target were a politician from just about any other country—particularly one in Africa or Eastern Europe: “I don’t think there’s any doubt that we would act, and the unexplained wealth order is the mechanism, and it would have been done by now.”

Although Harvie’s motion earned the support of members of Parliament from the Labour and Liberal Democrat parties, First Minister Nicola Sturgeon’s Scottish National Party passed an amended motion that acknowledged lawmakers’ concerns, but condemned any political interference in the nation’s justice system. Humza Yousa, Sturgeon’s cabinet secretary for justice, argued for the amendment (which ultimately passed). Having politicians launch an investigation, he said, would undermine the integrity of the justice system; non-politicians should be the ones choosing who gets investigated.

Yousa argued that his personal feelings are beside the point. “Frankly, I find former president Donald Trump a deplorable individual,” he said. “I don’t say that lightly, but as a person of color, and as a Muslim, I am exactly the type of person who would be the target of his racist and divisive policies if I was living in America. You’ll find no defense of Donald trump from me or this government.”

Eric Trump had lashed out at Scottish lawmakers prior to the vote. According to a report in the Scotsman, the younger Trump claimed the government was being unfair to an important contributor to the Scottish economy:

“Patrick Harvie is nothing more than a national embarrassment with his pathetic antics that only serve himself and his political agenda.

“If Harvie and the rest of the Scottish Government continue to treat overseas investors like this, it will deter future investors from conducting business in Scotland, ultimately crushing their economy, tourism and hospitality industries.”

The Trump Organisation statement also emphasised that it has “invested hundreds of millions of dollars into the Scottish economy” and “created thousands of jobs” at both Aberdeenshire and Turnberry, while rebuilding the latter into “one of the finest resorts anywhere in the world.”

Yet Trump’s Scottish resorts, because they have reported such large losses, have never paid corporate taxes in the UK. Local residents, moreover, dispute that the Trumps have contributed anywhere close to the number of jobs promised or claimed. “He’s been an absentee owner of Turnberry since he bought it,” Colin Smyth, a member of parliament  representing the area that includes the Turnberry resort, proclaimed during Wednesday’s debate.

Smyth, perhaps not surprisingly, supported Harvie’s motion to investigate the company’s finances: “The Trump Organization,” he said, “has been as successful at running the resort as their founder has been at being president.”

This article has been updated to correct the name of a Scottish official and the newspaper cited.