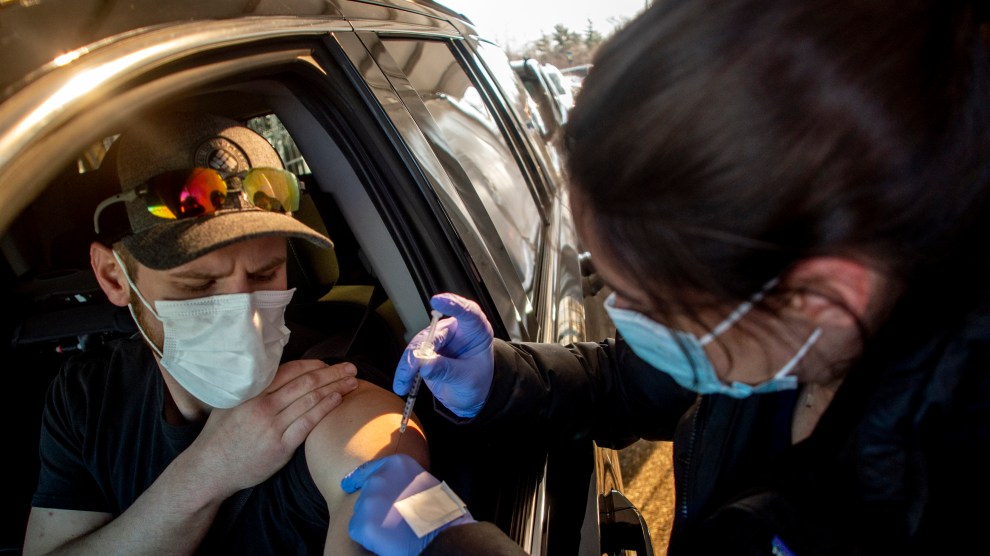 A vaccine is given in Michigan, where COVID-19 cases are increasing again. AP

After several months of declining COVID-19 cases nationwide, the numbers are now creeping back up in some states. The trend has alarmed top public health officials: Yesterday, Centers for Disease Control and Prevention head Dr. Rochelle Walensky warned of “impending doom.” That news came on the same day that the CDC announced that new data suggests that the Pfizer and Moderna vaccines prevent not just illness, but also transmission of COVID-19—which means that it’s highly unlikely that vaccinated people could spread the disease. To make sense of these complex dynamics, Mother Jones spoke to Dr. Natalie Dean, an assistant professor of biostatistics at the University of Florida who studies infectious disease epidemiology. Dean, who specializes in designing trials for treatments and vaccines during outbreaks, told us about possible reasons cases might be increasing again—and what that means for people who are eagerly awaiting a return to normal life in the coming months.

On Dr. Walensky’s statement on “impending doom”: My guess is that it reflects rises in cases that we’re seeing in certain areas in the United States, particularly Michigan, and in the northeast, New Jersey. It’s also that we’re starting to see the beginning of a rise in hospitalizations in certain locations. We always thought there was going to be this tension between these variants and people modifying their behavior, relaxing restrictions, and being increasingly mobile—doing all these things that would increase transmission. And then on the other hand, moving into the spring, being able to move things outdoors, and vaccines. We may not see the same trends everywhere, or in every group of people. While the vaccines are expected to help, my sense is that there’s also an increase in younger people being hospitalized—so that’s people who may not have had access to the vaccine yet.

While the vaccines are expected to help, my sense is that there’s also an increase in younger people being hospitalized—so that’s people who may not have had access to the vaccine yet.

On the role that the B.1.1.7 variant is playing in the uptick in cases: My sense is that it is probably contributing. The government has been investing a lot in increasing the number of tests that we sequence so we can have a better handle on tracking that. I think it could be a mix of factors driving the uptick, and I don’t know how to attribute each factor. But we do have good evidence from the UK that this variant is more transmissible and can be more severe, possibly due to higher viral loads.

On whether states relaxing restrictions is also contributing to the increase in cases: It’s hard to know how much is attributable to just policy. It’s easier for us to see policies at the state level, but then there may be different local policies, so it’s just always a lot more complex. And then, how compliant are people? Or what are people kind of doing otherwise? There are things that are not covered by policy, like visiting family and friends.

On how many people will need to be vaccinated before we stop seeing waves of cases: That is really hard to say. It feels like we’re on a knife’s edge sometimes, because the way that infectious diseases work is that when things start to take off, they can really take off quickly. We are seeing that in Michigan. Also, you can have vaccination coverage in some populations, but it may not be the populations where the virus is circulating. If you have good coverage among older adults, for example, then you can prevent a lot of severe disease that way. But if a lot of the transmission is happening among younger adults, who may be more active, have to go to work, and are more connected, then it just will have a different impact. You’ll need to see higher coverage in that particular population to see an impact on that population.

On whether fully vaccinated people need to worry about the increase in cases: An individual’s risk reflects both their own protections—like their own vaccination status—and also how much transmission is happening in the community. Increased transmission in the community—that can chip away at some of that protection. So if the variants cause an increase in cases somewhere, your risk of getting sick goes up, just by virtue of there being more exposure. That’s assuming that the vaccines work just as well against a variant. We have some some real evidence that that’s true for the B.1.1.7. But for the other variants, we have less data. So we’re not quite sure.

On the news that evidence suggests vaccines prevent transmission—not just illness: We’re seeing accumulating evidence that the vaccines are reducing infection, and that’s what’s going to impact transmission. We expected this to be the case. There was a worst-case scenario where somehow you can be vaccinated, and it protects you against disease, but you still can get infected and transmit to others. That was always a rare possibility, but it’s something that we were paying attention to. Now we can sort of rule that out.

On whether the measures we’ve been using to protect ourselves—like masks—will work against the variants: This is an issue we don’t fully understand. We think of viral load as kind of a proxy for how infectious you might be. It’s not a perfect relationship, but it does make sense. So yes, if people have higher viral loads, then they may be more infectious to others. On the flip side, we also have more people who have been infected already and have their own antibodies, and then just more people every day being vaccinated. So all these different competing things are moving at once.

On the role of warmer weather: We don’t even really understand the role of seasonality with flu. Is it because of people’s behavior? Is it because of UV light? Is it because of the drier air? We don’t fully understand what the main factors are, but we just know it is beneficial for respiratory viruses. So that’s one more thing working in our favor. At the beginning of a pandemic, seasonality doesn’t really matter that much, because there are just so many people that can be infected that it just can kind of move its way through, regardless. But I think we’re getting to a point now where there’s just bigger numbers, people who are immune either through infection or vaccination, but now the seasonal dynamics come into play a little more. We are feeling cautiously optimistic about this.

On why she’s worried about this next wave hitting vulnerable communities especially hard: We can have a certain amount of vaccine coverage nationally or even at a state level, but there are pockets of populations that remain susceptible. Those local dynamics matter for an individual’s risk. We need to figure out what the barriers to vaccination are. For example, for some period in Florida, people needed a doctor’s note to show that they had a comorbidity. But not everyone can take off work to go see a doctor, or they may not even have a physician. It’s going to require really careful attention to what these barriers are, and to correcting it when something is not working.

This interview has been lightly edited for clarity.