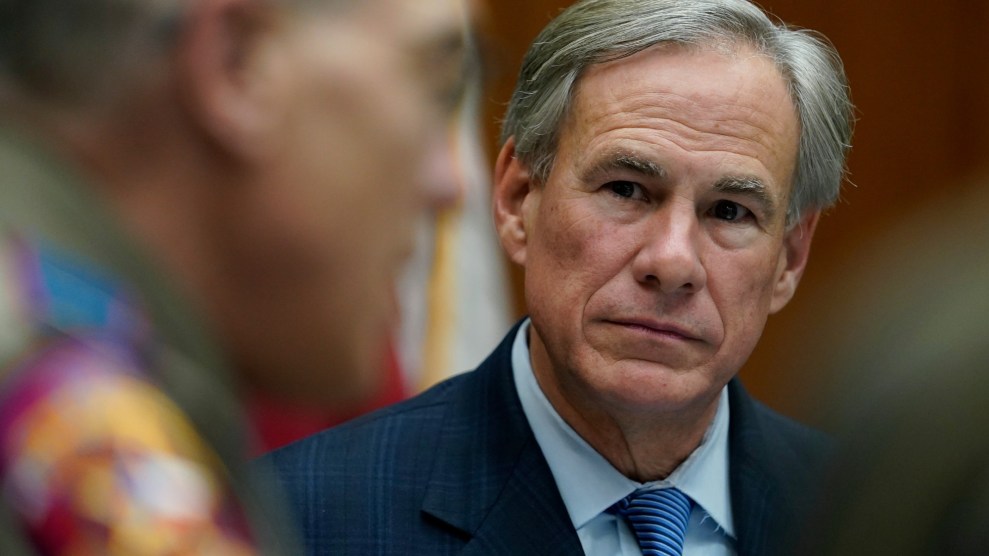 On Tuesday afternoon, Republican governors Greg Abbott of Texas and Tate Reeves of Mississippi, announced that they would be lifting all coronavirus restrictions in their respective states. That means no mask mandates and all businesses could operate at full capacity. “It is now time to open Texas 100 percent,” Abbott said.”People and businesses don’t need the state telling them how to operate.”

Public health officials felt differently. “Texas has been making some real progress, but it’s too soon for full reopening and to stop masking around others,” Dr. Mark McClellan said after the decision. McClellan is a public health expert and one of Abbott’s advisers, who wasn’t consulted before the governor’s announcement.

Clearly these actions flagrantly reject all scientific evidence about the spread of the disease and will inevitably cause unnecessary infections and death. The governors’ individual timing is also worth noting: The twin decisions come on the heels of twin climate disasters in the both states. Ever consistent, these Republican governors have looked at bad situations and have decided to make them worse.

In his announcement liberating Texans from the burdens of mask-wearing, Gov. Abbott returned to a cherished Republican talking point and emphasized the importance of “personal responsibility.” Throughout the pandemic, taking their cues from then-President Donald Trump, most Republican governors repeatedly crowed about a bottom-up, individualized approach to managing the public health crisis. Who needs real government leadership during a public health emergency when you can just rely on good old common sense from the American people? Aside from just how ill-advised this is, clearly their approach will kill people of color, poor people, and other marginalized people—not to mention their own constituents. Already devastated by suffering the disproportionate harm from COVID, now communities of color are doubly damaged by the massive infrastructure failures in the two states. When it comes to the Republican Party, whether in the federal government or on the state level, when many of their core convictions are translated into policy—from voting rights to public health—they usually exact the greatest suffering from the most vulnerable among us.

But these governors are not operating in a vacuum here. They need to distract the residents of their states from the real catastrophes they recently have experienced. Last month, a historic winter storm swept across several utterly unprepared southern states. In Texas, the power grid failed leaving millions of people freezing in the dark and often without water for days. A similar disaster unfolded in Mississippi, where 250,000 people lost electricity at the height of the storm. After 4 million Texans were left without power, the Lone Star State received most of the media attention, but Jackson, Mississippi’s 170,000 residents also face an unprecedented humanitarian crisis. Damage from the storm rendered the city’s water plant inoperable leaving those who live there without running water for more than two weeks.

First, let’s recall what happened in Texas, since Gov. Abbott seems just to want to forget it. The record-breaking winter storm that brought snow and below-freezing temperatures led to burst water pipes in Texas and caused widespread power and water outages. Why? Mostly because Texas’ energy operators were not required to winterize the state’s individual power grid, leaving it vulnerable to winter weather. Across the state, residents lined up for food and water. For people living in poverty, it pushed them even further over the edge. At least 80 deaths were reported—mostly from hypothermia and carbon monoxide poisonings—but it could take months before state officials are able to tally the full number. At the height of the disaster, Abbott went on Fox News, to falsely blame the black out on the Green New Deal, which, to be clear, is a policy idea, not a law. Meanwhile, mutual aid groups sprang up to do the job that the government couldn’t—or wouldn’t. “Unfortunately, Gov. [Abbott] is desperate to distract from his recent failures during the winter storm,” Democratic state Rep. Chris Turner said in a statement, “and is trying to change the subject.”

“Unfortunately, Gov. [Abbott] is desperate to distract from his recent failures during the winter storm and is trying to change the subject.”

In nearby Mississippi, almost 100 water main lines burst open in Jackson, an 80 percent Black city, where tens of thousands of the city’s residents still don’t have running water. The city’s old system needs $2 billion in repairs, but midcentury white flight left Jackson’s crumbling infrastructure without a strong tax base to pay for repairs. There is no timeline for when water service will return. So, thanks to Reeve’s decision to lift all restrictions statewide, Mississippians will be able to crowd indoor restaurants and shopping centers, but Jacksonians will struggle to simply wash their hands—it’s one of the best ways to stay safe from the coronavirus.

The climate disasters in the South did not make the pandemic disappear. In Texas, more than 2.2 million people have been infected and approximately 44,000 have died. This is all familiar territory for Gov. Abbott. Last spring, during the United States’ first (and most promising) attempt at a full lockdown, Abbot decided to buck the trend. Texas began reopening restaurants, malls, and other businesses early despite the threat that remained. (Sound familiar?) After prematurely lifting restrictions, Texas saw a record number of infections and hospitalizations. In Mississippi, more than 295,000 cases have been reported and 6,724 people have died. It was always a bad idea to lift restrictions, but especially now. As my colleague Jackie Mogensen reported, it “could give the virus even more opportunity to accumulate dangerous mutations.”

The timing of their announcements was especially infuriating, considering recent vaccine news. While Abbott and Reeves were forging ahead in their plan to kill their own constituents, President Joe Biden announced that there would be enough vaccine for each adult by the end of May. We’re so close, why are these Republican governors taking a bold stand on the side of the coronavirus?

One reason, as state Rep. Turner observed, is that it distracts from their terrible mishandling of a response to the weather disaster. But the other reason goes to the heart of the GOP modus operandi. Since the beginning of the pandemic, Republicans, starting with the former president, have largely treated the virus as a side show. Even with the world’s highest death toll at more than 515,000, they’ve stuck to their dusty old playbook written by Ronald Reagan more than 40 years ago. First, you demonize the government. That then undermines any of its efforts to provide the kinds of services that citizens need. Then you promote personal responsibility as the cure, even for structural problems. When the worst inevitably happens, blame individuals for not pulling themselves up by their bootstraps. Rinse and repeat.

But while the fallout from the governors’ choices once more will disproportionately affect the most marginalized communities of color and people living in poverty, completely lifting the coronavirus restrictions has the benefit of  delighting their narrow base that has become obsessed with owning the libs. Maybe Abbott and Reeves will score interviews on Fox News where they can brag about reopening their states and further distract from their abysmal handling of their infrastructure disasters. But all this posturing won’t result in anything tangible for the people of Mississippi or Texas, because the Republican Party has ceased to become a party governed by policy, ideas, or any core beliefs beyond the narrowest of self interests. They’ve laid the groundwork for new virus hotspots, just as the long COVID winter is coming to an end. For these GOP leaders, creating endless calamities for people of color seems to be one of the byproducts of their irresponsible actions. Was that one of the objectives all along? Or just a dividend in their over-investment in the myth of individual responsibility.