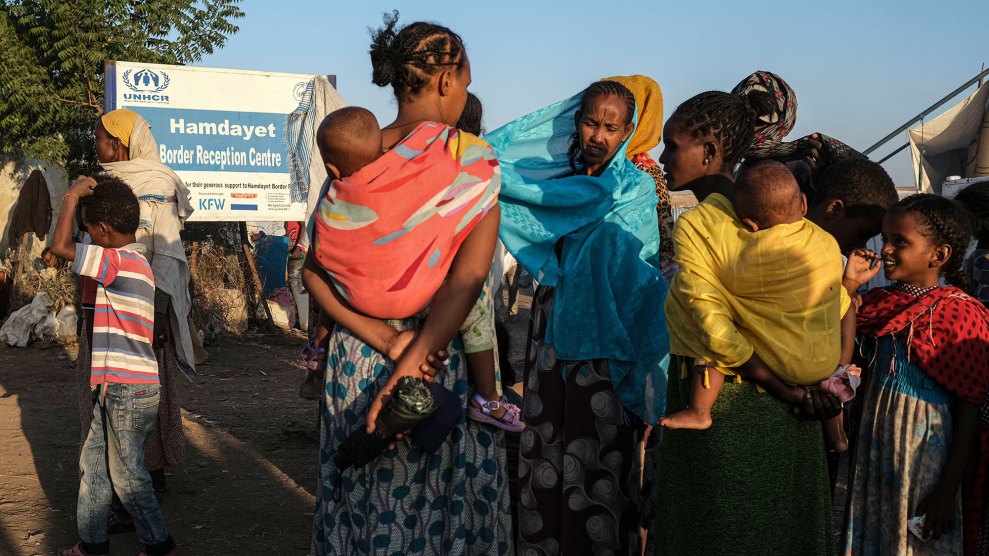 HAMDAYET, SUDAN - DECEMBER 6, 2020: Refugees from the Tigray region of Ethiopia wait to be transferred to a camp with more infrastructure at a UNHCR reception area in the east Sudanese border village of Hamdayet.Byron Smith/Getty Images

Update, 4/16/21, 6 p.m. EST: After this piece first published, and after much backlash from allies, the White House released a statement saying Biden would come up with the final number of refugees in May, even though the memo released Friday showed a continuation of the 15,000 cap.

President Joe Biden is walking back his promise to increase the number of refugees resettled in the United States this year and sticking with the Trump-era historic low cap of 15,000. The news comes as a huge blow to the refugee resettlement groups worldwide who had thousands of people already in the process of seeking refuge in the United States after the Biden administration previously promised to raise the cap to 62,500 this year.

Minnesota Representative Ihan Omar was one of many Democrats who quickly condemned Biden’s decision Friday, calling it “shameful that @POTUS is reneging on a key promise to welcome refugees.”

As a refugee, I know finding a home is a matter of life or death for children around the world.

It is shameful that @POTUS is reneging on a key promise to welcome refugees, moments after @RepSchakowsky @RepJayapal, myself and others called on him to increase the refugee cap. pic.twitter.com/eaxjHCUhrI

“The cap announced today does not take proper account of the fact that over 35,000 refugees have already been vetted and cleared for arrival, and over 100,000 are in the pipeline often waiting years to be reunited with their loved ones,” said David Miliband, President and CEO of the International Rescue Committee. “This is a time of unprecedented global need, and the US is still far from returning to its historic role of safe haven for the world’s persecuted and most vulnerable.”

Last February, the Biden administration laid out its plan to increase the cap on refugee resettlements in a report to Congress: “To respond to all of these unforeseen and urgent situations, a revised target of 62,500 is proposed and is justified by grave humanitarian concerns and is in the national interest.”

Since then, advocates and international refugee organizations have criticized the president’s lack of action on this issue. Friday morning, before the news broke, White House Press Secretary Jen Psaki was asked by a reporter during the daily press briefing if it was true that Biden didn’t want to raise the refugee cap “while the situation at the border is what it is right now.”

The “situation” at the border refers to the increase in the number of unaccompanied children Border Patrol has encountered this year, and the total number of migrant apprehensions going up, partly because of repeat attempts from asylum seekers who have been prohibited from entering the country for the last year.

Psaki responded: “that is a factor.” She added that the Office of Refugee Resettlement (ORR), an agency within Health and Human Services, has personnel “working on both issues so we have to insure that there is capacity and ability to manage both.”

Those familiar with the agency have pushed back on Psaki’s reasoning behind the huge reversal by the Biden administration. They argue that what’s happening at the border is not the same as the refugee resettlement program—a lengthy and thoroughly vetted process for people applying for resettlement from countries around the world. It can often take years before the US government grants someone refugee status.

Once refugees are brought to the United States, ORR gets involved. ORR works to “provide people in need with critical resources to assist them in becoming integrated members of American society,” and that includes refugees, asylees, and victims of trafficking. The agency also provides care and placement for unaccompanied migrant children at the border after they’ve been released form Department of Homeland Security. Some familiar with the way ORR operates took to Twitter Friday to say that ORR can and has handled both programs in the past.

After Psaki’s press conference, the White House posted a memo that showed it would not raise the historic low cap left behind by the Trump administration. Biden would however restore some of the allocations to regions skipped over by the Trump administration:. 7,000 refugees admitted from Africa; 3,000 from Latin America and the Caribbean; 1,500 from Europe and Central Asia; 1,500 from Near East and South Asia; 1,000 from East Asia; and 1,000 for unallocated reserve.

Psaki said Friday afternoon that the 15,000 cap for 2021 is “just the beginning.” And hours later, after much backlash from allies, Psaki sent out a statement saying the directive had been “subject to some confusion,” and that we could expect Biden to “set a final, increased refugee cap for the remainder of the fiscal year by May 15.”

The backtracking is here. Nowhere in today’s announcement was this mentioned. But now WH press sec Psaki says an increased cap for this year is coming…

“We expect the President to set a final, increased refugee cap for the remainder of this fiscal year by May 15.” pic.twitter.com/JBpi3aa6vP

As a candidate, Biden had promised to go beyond restoring the refugee resettlement program back from Trump’s historic lows, and to raise it over time to a historic high of 125,000 “commensurate with our responsibility, our values, and the unprecedented global need.”

Friday’s abandonment of that promise comes at a time of political pressure from both sides of the aisle on Biden’s handling of the border since taking office: Republicans say that Biden’s border policies are sending a message that the border is open, and they also seem to have conveniently forgotten the spike in the number of migrant families at the border under Trump and the inhumane ways in which his administration treated them. Democrats have said Biden needs to do more to not only undo the chaos Trump created, but to use the current moment as an opportunity to make real change in immigration policy. The fact remains, the asylum seekers at the border and refugees seeking resettlement from around the world go through different processes—and politicians are only harming both groups when they conflate them.