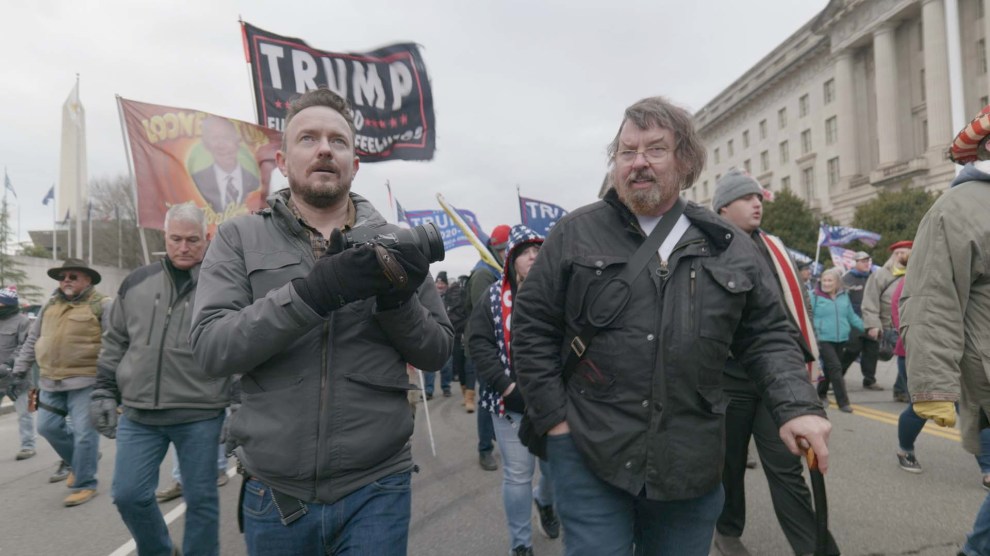 Over the course of his new six episode HBO documentary, Into The Storm, filmmaker Cullen Hoback exhaustively details the intrigue and shadowy players involved in the QAnon conspiracy theory. As CNN’s Brian Lowry explains, “Hoback appears determined not to leave any stones unturned.”

QAnon is a conspiracy movement based on postings from an anonymous account that purports to be a national security insider with so-called Q-level clearance. The Q posts emerged on 4chan, a notorious online message board, before moving to 8chan, a web forum that Watkins controlled—and where users frequently posted child porn. (The most recent Q posts appeared on 8kun, a successor site also controlled by Watkins.) In the second episode of the documentary series, Hoback raises this point briefly, asking prominent Q adherents how they feel about 8chan’s sordid reputation and historic ties to child sexual abuse material. Each of them express deep discomfort with the site’s general fare. One, Liz Crokin, says she wasn’t aware about 8chan’s ties to child pornography, calling it “troublesome.”

In August 2019, Wired reported that law enforcement officials in the Philippines, where Jim Watkins was based before his recent return to the US, were investigating the “alleged prevalence of child pornography” on 8chan. They quoted an official with the country’s National Bureau of Investigation: “If you are going to visit his site, he is actually trying to promote, or catering to, child pornography, and it is a serious offense here.”

On October 29, 2020, Mother Jones published an investigation revealing that Watkins’s web company had hosted scores of domains featuring child sex abuse material themes in the past. Here’s what we reported:

The domains’ names include terms such as “preteen,” “schoolgirl,” and “child” alongside graphic terms for genitalia and words like “rape” and “love.” It’s unclear what, if anything, is currently being served at the domains. However, an analysis of metadata collected years ago from one by archive.org shows dozens of filenames and links containing highly suggestive terms, including “xxxpreteen,” “children,” and sexual references to girls aged 12 to 15.

Hoback addresses this in the documentary but in a way that misrepresents our findings and minimizes the extent of Watkins’ involvement with these sites. He suggests the story was somehow undermined by subsequent reports. It hasn’t been.

Much of the narrative drive of Into The Storm is the battle between Fredrick Brennan, the original founder of 8chan, and both Watkins. They all once worked together, but Brennan has since disassociated himself from 8chan and the Watkins and established himself as one of their chief antagonists. Brennan’s allies include include Aubrey Cottle, a ringleader of Anonymous, the no-holds-barred “hactivist” group.

Hoback characterizes our investigation as the product of a smear campaign mounted by Brennan and Cottle that unfairly relied on a domain name that Jim Watkins says he set up some 16 years ago. And he suggests they manipulated Mother Jones into slamming Watkins by publishing unvetted material.

This is not true. Cottle did tip us off to this story—as we reported at the time—which prompted us to investigate these domains and their connections to Jim Watkins. This included contacting Watkins by telephone multiple times and asking him about the history of the domains and his hosting company. Though we didn’t know it at the time, Hoback filmed Watkins talking to us on speakerphone on one of these calls. Hoback’s documentary includes snippets of that 28-minute call and falsely implies the conversation was about a single domain: “00preteen.com.” In reality, we asked Watkins about a series of domain names that suggested child sexual abuse that his company registered over a several year period beginning in the late 1990s.

This is an odd and inaccurate summation. In providing it, Hoback gives cover to Watkins by minimizing what his company did and mischaracterizing what Mother Jones reported.

As part of our investigation, we consulted a lawyer. Because the domain names suggested the presence of child abuse sexual material, we were limited in how far we could go in examining the websites or archives that might document them. (Anti-child pornography laws put anyone who accesses such material, for whatever reason, at legal risk.) Analysis of the metadata archived from one of the sites showed filenames and URLs with references to child pornography, suggesting there may have been child sex abuse material there. One unsigned account posted online by someone claiming to have visited an archive of one of these sites reported it contained material that was “probably illegal” and told anyone going there to “be prepared there is CP.”

For all these reasons, the Mother Jones article didn’t establish whether the sites Jim Watkins’ company hosted held child pornography. But Watkins himself confirmed his company had hosted these domains, though he claimed customers could have registered them and that they were removed as soon as the company became aware. He also offered multiple explanations of their purpose—that whoever established them did so because they might later sell them, or that they were set up to lure search traffic to other sites. He admitted that he did not vet clients or take action to determine if they used his service for nefarious or illegal activity, calling it “about the most un-American thing I can imagine.”

But there was no question or debate that Watkins was working to make money off of hosting scores of child porn-themed domains. As the article put it, “at a minimum…Watkins profited from domains with names explicitly related to pedophilia—the very thing that QAnon followers say that they’re motivated to end.”

When we contacted him, Hoback declined to answer detailed questions about his characterization of the Mother Jones story. But he insisted, “I’m giving zero cover to Jim…I think what Jim’s company did is gross and unethical, but there’s no evidence suggesting it was illegal.”