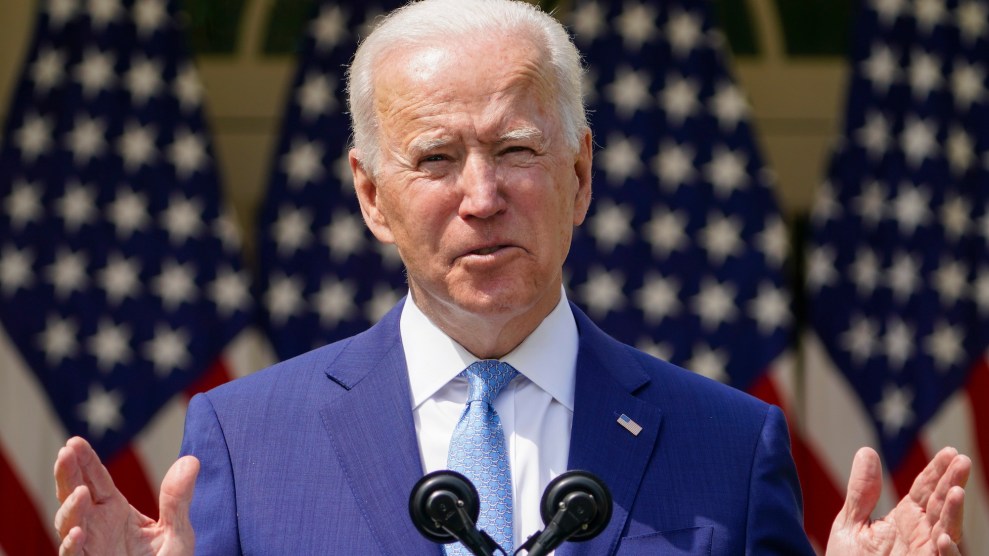 Democrats won back the House of Representatives in 2018 with a promise to protect the Affordable Care Act. They retread the same strategy in 2020 as Democratic congressional candidates championed improvements to the landmark health care bill, promising coverage during a pandemic while the GOP denied its severity. Then-candidate Joe Biden promised to lower drug prices with a proposal that was heralded as one of the Democratic primary field’s most aggressive attempts to tackle Big Pharma profits.

Which makes the White House’s understated opening bid on health care a confusing outcome for a party that’s wagered its success on dismantling barriers to medical access. But it also reflects the messy politics of health care—and a party that still hasn’t reached a consensus on what the future of health insurance should look like.

President Biden’s American Families Plan, the second half of his economic agenda which he will unveil during a quasi-State of the Union speech before Congress on Wednesday night, promises to make permanent the temporary tweaks to boost Obamacare that passed as part of the COVID relief package earlier this year. That law set in place for two years policies that make it easier for more people to buy individual insurance coverage off Obamacare’s marketplaces—both by increasing the amount of government funds people receive to offset the cost of insurance and by expanding access for those subsidies so that more middle-class families qualify. (Previously, families earning 400 percent of the poverty level—or in other terms, more than $87,840 for a family of three—were entirely cut off from assistance.)

The changes to government subsidies in the COVID law lowers coverage costs by an average of $50 for nine million people and should help four million uninsured people access coverage, according to White House estimates, and those outcomes would carry over to its latest proposal. If Biden’s plan becomes law, anyone buying insurance off Obamacare’s marketplaces would have to spend no more than 8.5 percent of their income on health insurance (and people who earn less would pay a far lower rate than that).

Democrats on Capitol Hill spent the last week wondering if any health insurance changes would even make it in there at all. Early reports ahead of the plan’s unveiling suggested the White House would table any health care initiatives for a future policy push—a risky endeavor since, between this new Families Plan and his previously announced American Jobs Plan, Biden is already asking Congress to approve nearly $4 trillion in new spending. But while health insurance in some form made it into Biden’s family plan, the policy is far from what he promised on the campaign trail, which included a public option, reducing the Medicare eligibility age to 60, and lowering prescription drug costs by letting Medicare negotiate prices. The White House’s proposal notes that Biden still holds those grander health care ambitions—and his speech tonight will call for lowering drug prices, HuffPost reported—but they didn’t make the cut in the two economic proposals that will likely define the remainder of his first year as president and his party’s record heading into the 2022 midterms.

Democrats across the party spectrum have spent the past few weeks warning against this sort of tepid offering with a flood of strongly worded letters urging the president to put health care front and center. House Speaker Nancy Pelosi (D-Calif.), in an encore presentation of her stare downs with the Obama administration over the ACA, moved ahead with reintroducing House Democrats’ signature drug pricing bill and vowed health care “will be a top priority for House Democrats to be included in the American Families Plan.”

To gamble against Pelosi would be a sucker’s bet. When Democrats wrested control of the House back in 2018, more than half of their advertisements focused on protecting the ACA. The issue’s salience persisted during the 2020 presidential primary, though took a backseat to the pandemic and the collapsing economy during the general election. Even so, internal polling that Data for Progress, a liberal think tank, and OpenLabs, a progressive polling firm, conducted on behalf of Democratic lawmakers found that health care is one of the most important issues to all voters, second only to the economy—and one where they most trust Democrats to take action.

To the extent there’s been intraparty sparring over health care, it’s been over which option would best serve the party’s interests heading into the 2022 midterm elections. Some, like Pelosi, argued for the ACA subsidies Biden proposed in his agenda. Others, like Sen. Bernie Sanders (I-Vt.), pushed dropping the Medicare eligibility age to 60 or 55. Support for one path over the other doesn’t follow the usual ideological contours, garnering support from moderate and progressive lawmakers alike, and is not mutually exclusive. Most Democrats support some version of lowering drug prices through Medicare negotiations, a proposal the House passed last year. That bill would likely save up to $500 billion in federal spending, which could be applied to the bottom line of other health care costs.

“If the argument is we have enough money to do the ACA subsidies but not Medicare eligibility and benefits and Pharma drug pricing, that makes no sense,” says Rep. Pramila Jayapal (D-Wash.), the chair of the Congressional Progressive Caucus who co-authored a letter with Rep. Jared Golden (D-Maine), a moderate colleague, to lower the Medicare eligibility age. She adds she’s “a little frustrated” more hasn’t been done on health care since Democrats took back Congress and the White House during a pandemic.

But the fuzziness of the White House’s health care agenda is perhaps best understood as an act of deference. While the Biden administration leaned on a top-down approach to push the COVID relief package through before the looming March deadline—when most of the emergency benefits were set to expire—the economic proposals will be shaped through a longer, more collaborative process with Congress.

Where Biden’s plan offers specifics is on topics where Democrats are in near-universal agreement. The proposed $225 billion for affordable child care, for example, largely mirrors a proposal by Sen. Patty Murray (D-Wash.) that Democrats have rallied around for several years. And while health care gets shorter shrift, the majority of Biden’s plan centers on matters like child care and paid leave—progressive wishlist items that had languished at the party’s margins for years before the pandemic ushered them into the mainstream.