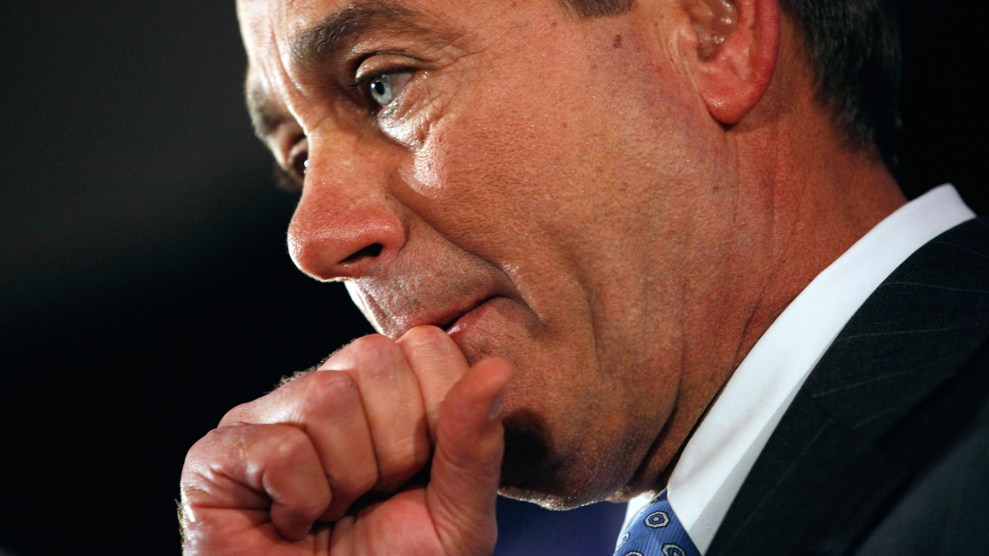 So now we have to hear John Boehner whine about what happened to the Republican Party? The former House Speaker has a new book coming out, and the New York Times, which obtained an excerpt, reports that in this memoir Boehner denounces Donald Trump for having “incited that bloody insurrection” at the Capitol on January 6 and bemoans that his Grand Old Party has been taken over by “whack jobs.”

In the book, Boehner, who skedaddled out of the House in 2015, complains that Trump’s “refusal to accept the result of the election not only cost Republicans the Senate but led to mob violence.” He blasts Trump for “the bullshit he’d been shoveling since he lost a fair election.” The assault on Capitol Hill, he notes, “was painful to watch.” Boehner writes, “I’ll admit I wasn’t prepared for what came after the election—Trump refusing to accept the results and stoking the flames of conspiracy that turned into violence in the seat of our democracy, the building over which I once presided.”

What he did not say in this excerpt is that he shares the blame for the rise of extremism in the Republican Party that led to Trump’s 2016 victory—and, subsequently, the bloody and seditious attack of January 6.

Boehner became speaker in 2011 because of the tea party. This right-wing movement, fueled by the big money of the Koch Brothers and other conservative donors, swept the Republicans into control of the House of Representatives in the midterm elections of 2010. The tea party was an amalgamation of various constituencies, including the religious right, anti-government GOPers, and what Boehner would call “whack jobs.” A poll at the time found that 30 percent of tea partiers believed the racist birther conspiracy theory that President Barack Obama was born in Kenya. In fact, fierce hatred of Obama was a chief animating force for the movement. In a way, the tea party was a continuation of the right’s extreme reaction to Obama that had been on display at 2008 rallies for John McCain and Sarah Palin, where Republican voters decried Obama as a commie who was, as Palin charged, “palling around with terrorists.”

“It’s a dangerous strategy,” Bob Inglis observed, “to build conservatism on information and policies that are not credible.”

In 2010, Boehner wanted to exploit this extremist anger and ride it into power. One person who saw this clearly was Rep. Bob Inglis (R-SC). A tried-and-true conservative, Inglis was being challenged in a GOP primary by a local lawyer named Trey Gowdy, who was running as a tea party candidate. Inglis, as he told me back then, was worried about what was happening to his party. Longtime supporters in the district were telling him they were disappointed he wasn’t echoing the far right’s assault on Obama. “They say, ‘Bob, what don’t you get?'” Inglis recalled. “‘Barack Obama is a socialist, communist Marxist who wants to destroy the American economy so he can take over as dictator. Health care is part of that. And he wants to open up the Mexican border and turn [the US] into a Muslim nation.’”

Inglis didn’t know how to respond to this. He went to Boehner, then the top Republican in the House, for advice on what he should say to these losing-their-minds Republicans. According to Inglis,

[Boehner] said, “I would have told them that it’s not quite that bad. We disagree with [Obama] on the issues.” I said, “Hold on Boehner, that doesn’t work. Let me tell you, I tried that and it did not work.” I said [to Boehner], “If you’re going to lead these people and the fearful stampede to the cliff that they’re heading to, you have to turn around and say over your shoulder, ‘Hey, you don’t know the half of it.’”

In other words, Republican leaders could not negotiate with the anger and paranoia on the right. As Inglis, who lost that race to Gowdy, saw the situation, Boehner and then-House minority whip Eric Cantor had made a major strategic calculation: Play to the tea party crowd. “It’s a dangerous strategy,” Inglis observed in 2010, “to build conservatism on information and policies that are not credible.”

But that’s what Boehner did. He helped enable tea party extremism. In November 2009, he hosted an anti-Obamacare tea party rally on Capitol Hill, during which the crowd shouted, “Nazis, Nazis” when referring to Democrats. Speaking at that demonstration, Boehner fueled the fear and hatred, declaring the health care bill the “greatest threat to freedom I have seen.” At another tea party protest at the Capitol opposing Obama’s health care legislation, protesters shouted the n-word at Rep. John Lewis (D-Ga.), the civil rights icon. And some yelled a homophobic slur at Rep. Barney Frank (D-Mass.)

Boehner never tried to to tamp down conservative anger and paranoia. He whipped up extremism to achieve power.

Once the GOP, with a tea party boost, won back the House and Boehner became speaker, it was no secret that he despised the tea party-ish House members. These grandstanders, who declared war on RINOs, were always out to get him. They prevented Boehner from striking a grand budget deal with Obama. His misery was much advertised. In 2015, Boehner described his stint as speaker in these pathetic terms: “Garbage men get used to the smell of bad garbage. Prisoners learn how to become prisoners, all right?” But Boehner never tried to to tamp down conservative anger and paranoia. He did not tell the birthers to knock it off. He egged on the Obama hatred, allowing the Benghazi-istas to run free and wild. He whipped up extremism on the right to achieve power and then discovered he couldn’t ride that tiger. In 2015, he left the House for calmer days as a merlot-sipping (gulping?) lobbyist.

But the beast Boehner fed did not crawl away. It became the base for Trump and Trumpism. The political cultural fire that Boehner allowed to burn was just right for Trump and his supertanker of gasoline. He had presided over the GOP’s complete embrace of conspiracy-theory politics and hate-driven extremism. And there’s not a great distance between shouting “Nazis” at Democratic lawmakers outside the Capitol and violently bursting into the building to assault elected officials.

Now Boehner tells us that the January 6 raid was “scary” and “sad.” He solemnly observes, “It should have been a wake-up call for a return to Republican sanity.” And he insists the GOP must “take back control from the faction that had grown to include everyone from garden-variety whack jobs to insurrectionists.”

But Dear Mr. Boehner, what is this “Republican sanity” of which you speak? When did it reign? Not on your watch. You invited in the crazies and gave them a big bear-hug. You validated their fears and conspiracies. You set them on a path that not so surprisingly ended up with a Republican president inciting a Republican crowd to ransack the citadel of American democracy where you once worked. So spare us your righteous indignation. As you stare deeply into that purplish red sea in your glass, attempt to come to terms with the fact that you once had a chance to try to protect your party and country from insanity and extremism. Instead, you said, “Pour me another.”