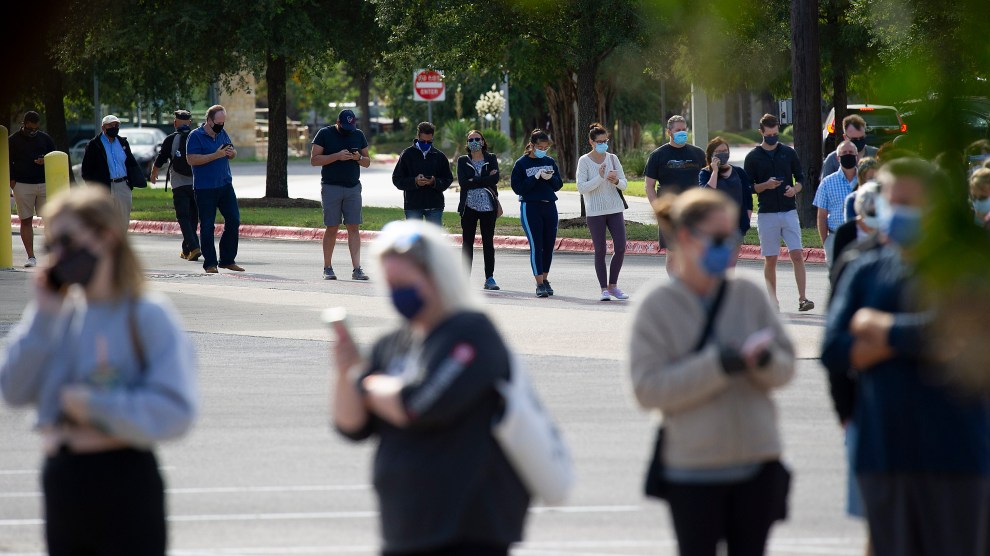 Voters line up in Austin in October. Mario Cantu/CSM/Zuma

On Thursday morning, Sen. Marco Rubio shared a video of himself insulting Delta Airlines officials as “woke corporate hypocrites” because the company had issued a statement opposing a new law that will make it harder for many Georgians to vote. In a strange line of logic, the Florida senator seemed to argue that the law, which among other restrictions bans non-poll-workers from distributing water to waiting voters, was not as bad as genocide against Uighur Muslims in China, where Delta also does business, and therefore should not be subject to the company’s reproach. “They make billions of dollars in a country that doesn’t even have elections…and they don’t say a word about it,” Rubio argued, “but in America they’re prepared to boycott a state and condemn them publicly…They’re hypocrites.”

The sparring between the GOP and corporations comes after pressure from Black activists.

Other right-wingers soon piled on. Sen. Roger Wicker of Mississippi argued that Coca-Cola, which, like Delta, is based in Atlanta, was “caving to the ‘woke’ left” by condemning the Georgia law. “Unelected, multinational corporations are now openly attacking sovereign U.S. states & the right of their citizens to secure their own elections,” Stephen Miller, a White House adviser to Donald Trump, added on Twitter. “This is a corporate ambush on Democracy.”

Georgia looks to just be the opening salvo in a confrontation between top Republican officials and big corporations over voter suppression measures this year: Lawmakers in dozens of states are now considering similar bills, and Black activists, worried about the potential impact on their communities’ votes, are pushing corporate executives to take a stand. Next up after Georgia could be Texas, where the state Senate passed a bill Thursday that would, among other steps, impose statewide limits on polling-place hours and ban widely used ballot drop boxes. Later that day, American Airlines and Dell, both based in Texas, put out statements opposing the state’s new bill. “Instead of seeking to limit access, governments should provide innovative pathways for citizens to have their voices heard,” Dell said in a statement. “We are strongly opposed to this bill and others like it,” American Airlines added. Texas Republican Lt. Gov. Dan Patrick, who supports these voter restrictions after Trump baselessly claimed voter fraud led to President Biden’s victory, promptly returned fire. “Texans are fed up with corporations that don’t share our values trying to dictate public policy,” he said in a statement.

The sparring between Republicans and corporations, to be clear, is not a result of top executives’ altruism. As the New York Times reports, Black activists pressured companies to protest the Georgia law after it passed last month, arguing that corporate America had remained far too quiet. “We are all frustrated with these companies that claim that they are standing with the Black community around racial justice and racial equality” but don’t take action, LaTosha Brown, a co-founder of Black Voters Matter, told the Times. She joined protesters on March 25 at the Atlanta airport to call for a boycott of Delta, and to urge the airline’s chief executive to use his power in the voting rights debate. “They are complicit in their silence,” she said. Bishop Reginald Jackson of the African Methodist Episcopal Church, speaking at a rally outside Georgia’s capitol that week, also threatened to boycott companies that did not take a stand. “[O]ur position is, if you can’t stand with us now, you don’t need our money, you don’t need our support,” he said.

If the Texas bill passes the House and is signed into law, it’s unclear if Dell or other companies that oppose it are prepared to take additional steps. It’s also unclear exactly where else the battle will go—though with 361 measures that would restrict voting access being pushed in 47 states, the possibilities are considerable.

As these feuds continue, Democratic Sen. Raphael Warnock of Georgia, a Black pastor who was elected in January after Georgia’s progressives came out to the polls in big numbers, hopes companies don’t back down. “I’ve seen these corporations falling over themselves every year around the time of the King holiday, celebrating Dr. King,” Warnock said last weekend. “The way to celebrate Dr. King is to stand up for what he represented: voting rights.”