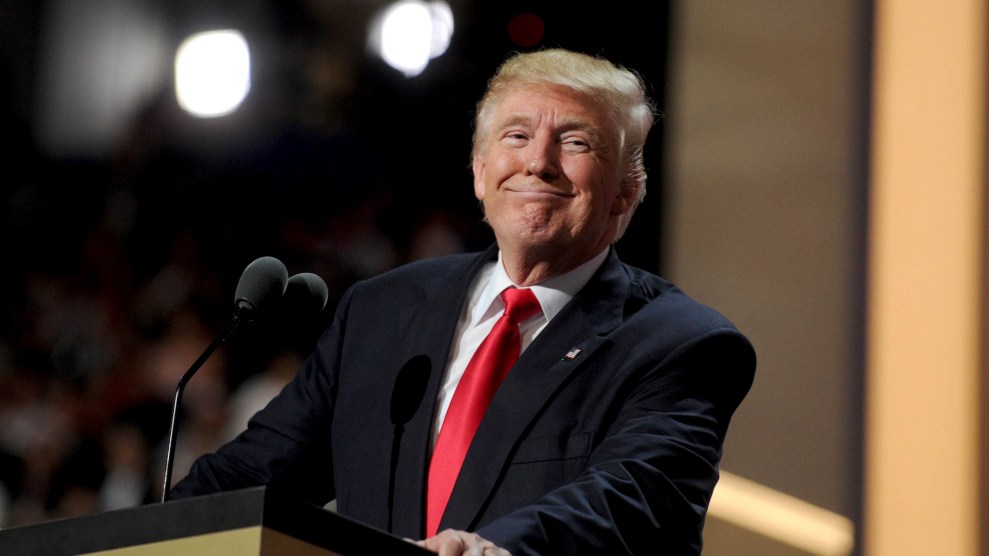 Donald Trump loves to boast about his empire of hotels, golf resorts, and high-end condos, but a large chunk of his wealth actually derives from another source altogether. Of Trump’s estimated $2.5 billion net worth, about $780 million is tied up in a partnership with Vornado Realty Trust, one of the largest commercial real estate firms in the country. Together, Trump and Vornado own two high-profile office buildings on opposite coasts—1290 Avenue of the Americas in New York City and 555 California Street in the heart of San Francisco’s financial district. Trump holds a minority, 30 percent stake in the venture, and he has no say in how the buildings are operated, nor do they bear his name. But the former president might be about to get a big and desperately needed payday in connection with this enterprise.

Earlier this week, Bloomberg reported that Vornado had successfully refinanced the California Street property with a $1.2 billion loan from JPMorgan, pulling out $617 million in equity in the process. This could be great news for Trump. Over the four years he spent in the White House, revenues at nearly all of his businesses declined, his company struck few new deals (and no new foreign deals), and the luxury condo sales that had previously provided a steady stream of cash all but ceased (with some notable exceptions). And the pandemic made a bad situation worse.

Meanwhile, Trump has a lot of debt. He came into office owing as much as $640 million, according to his personal financial disclosure filings. And, with his presidency over, many of those loans are now coming due. Trump owes as much as half a billion dollars to various lenders in the next four years. If Trump were virtually any other businessman, he could probably easily refinance or extend some of these loans.But Trump is not any other businessman. His lengthy record of corporate bankruptcies, and of stiffing and suing lenders, made him a pariah to most banks—and that was before his presidency made him even more toxic.

Still, as long as he wasn’t president anymore, Trump probably wouldn’t have had too much trouble finding someone to refinance his loans, though the terms might not be ideal, commercial real estate insiders told Mother Jones. Then January 6 happened.

The insurrection, which Trump openly egged on, changed the calculus for many of the businesses that deal with Trump. In the aftermath of the attack, nearly all of the financial institutions that Trump dealt with said they would no longer do business with him. In fact, a number of his financial partners, including a small bank in Florida that was his most recent lender, announced they would close his accounts and return his money. Even the PGA, pulled its 2022 championship from Trump’s Bedminster, New Jersey golf course. Meanwhile, numerous tenants of Trump properties said they would be moving out, meaning his building would no longer look so appealing to investors who don’t care about associating with Trump.

In other words, after January 6, the issue of how to pay back those pending loans became much more acute, as the likelihood of finding anyone to refinance the debts—even on bad terms—dramatically declined. If he can’t refinance the loans, Trump will have two options: repay the loans himself or default. Barring a sudden infusion of cash, the first option would likely require him to sell one or more of his iconic properties. So, if Trump could get his hands on a big pile of cash, it would really help him right now.

Vornado’s refinance of 555 California could provide that big cash infusion—and if Vornado refinances 1290 Avenue of the Americas in New York City, as it is rumored to be considering, he could receive more cash. Could is the operative word.

Only Trump and Vornado know how much Trump stands to receive from the refinance of 555 California. That’s all dictated by the terms of their partnership agreement, says Kevin Riordan, a commercial real estate investor and professor of commercial real estate at Rutgers University and Montclair State University. “Can he get money out of it? Yes. But we can’t tell how much,” he says.

It could be as simple as Trump receiving 30 percent of the cash, because of his 30 percent stake, but that’s not likely. Riordan says that for any number of reasons—either because of the original terms of the partnership agreement or if Trump didn’t live up to his end of the deal, failing to contribute his portion when money was needed, for example—Vornado may be able to claim most of the cash from the refinancing and has the upper hand in deciding how the money will be split.

Trump has been an even less equal partner in the relationship than his 30 percent stake already implies. He more or less stumbled into the arrangement. In the 1980s, he bought a huge swath of property on Manhattan’s West Side, with the notion of building a massive “Trump City” on top of what had been the old Penn Central rail yards. That project was a huge flop, and Trump defaulted on the loans he had taken out to buy the property. But he caught a lucky break when some investors from Hong Kong agreed to buy up the whole mess, and even let him remain a partner—on the condition that he only have 30 percent ownership and that he have no decision-making power. The investors eventually sold off what remained of Trump’s development and reinvested in 555 California and 1290 Avenue of the Americas. They later sold the properties—partnership with Trump and all—to Vornado.

Steve Roth, a billionaire real estate mogul who runs Vornado, has been friendly with Trump over the years, but recently there have been rumblings that Vornado has been less than pleased with Trump as a partner.

After the November election, while Trump was still contesting the results, Vornado began shopping around the two buildings, hoping to cash out. There were no takers, although the properites are considered “trophy buildings,” Riordan says. The Wall Street Journal reported that Vornado executives concluded that it was Trump’s involvement that was making the properties unsellable. After the January 6 insurrection, the Journal reported Vornado was seeking a way out of their partnership with Trump.

There’s no indication that this refinancing has cut Trump out of the deal but Riordan says major events like a refinancing are often an opportunity for partners to reset their partnership agreements.

Since leaving office, Trump has reportedly been aloof from his business and preoccupied by political score-settling and wrestling control of Republican fundraising away from the RNC. There are no major new Trump Organization projects rumored to be in the works and no signs that Trump’s businesses are rebounding from their pandemic-induced battering. He needs the cash from Vornado’s refinancing more than ever, but it remains to be seen whether he will get it.