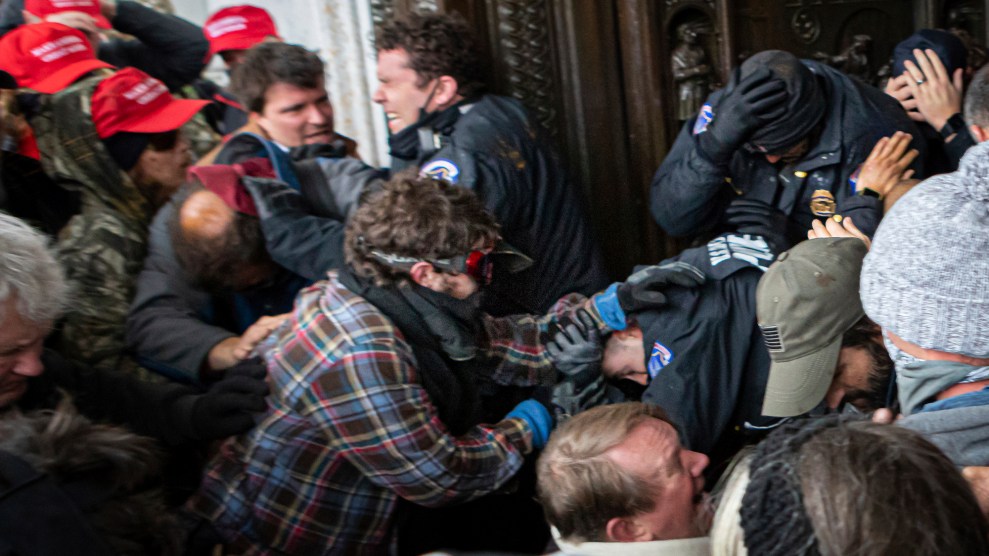 Republican House Minority Leader Kevin McCarthy on Tuesday threw cold water on plans for a bipartisan commission to investigate the assault on the US Capitol on January 6, announcing he would vote no. But even as McCarthy continued to lead a GOP effort to downplay and whitewash the insurrection, he held an event just last week in Washington, DC, to “Back the Blue,” including honoring fallen Capitol Police officers who died in the aftermath of January 6. In his remarks at the police event, McCarthy made no specific mention of what happened at the Capitol four months ago, including the extensive violence against police at the hands of the pro-Trump mob.

According to a database of January 6 cases assembled and analyzed by Mother Jones, of the more than 450 defendants charged to date, at least 81 people are accused of assaulting police at the Capitol that day. The defendants allegedly used an array of weapons, from flag poles and fire extinguishers to their own fists. Many of the attacks were captured in video footage that circulated widely on social media. CBS News reported that more than 35 of the defendants are accused of using a deadly or dangerous weapon.

US Capitol Police Officer Brian D. Sicknick was among the most prominent examples of those attacked, having suffered two strokes and dying the day after after being hit with bear spray on the front lines. He was one of approximately 140 police officers—from both the US Capitol Police and the DC Metropolitan Police—who were hurt during the assault, suffering injuries ranging from the partial loss of a finger to concussions and broken ribs. “Many more” suffered injuries “they did not even bother to report,” Robert J. Contee III, the acting chief of police for the MPD, said in a January 26 statement submitted to a House briefing, noting that two Capitol Police officers took their own lives in the weeks after the attack.

Since then, Republicans have continued with a brazen campaign to gloss over the violence; at a House hearing last week, Georgia Rep. Andrew Clyde suggested that the majority of Trump supporters who illegally entered the Capitol were part of what could be considered “a normal tourist visit.”

“They were there with a purpose to hurt people,” Capitol Police Officer Harry Dunn said on CNN after listening to comments like Clyde’s. “It just hurts to believe that people can think that it was a normal day, it was a tour. It’s hurtful that they can say things like that when we had officers give their life to make sure that they were safe.”

“Death is the only remedy,” said one defendant who allegedly beat a police officer with a flagpole, according to the FBI.

One recent defendant charged with assault is Christopher Warnagiris, an active-duty Marine accused of shoving his way into a door at the Capitol as an officer struggled to keep it closed. After he made it inside, he blocked officers from stopping others from getting through the door.

Other stark examples include Thomas Sibick, a Buffalo, New York, man accused of ripping the badge off the chest of Capitol Police Officer Michael Fanone, along with his radio; Sibick allegedly later buried the badge in his back yard.

Peter Stager of Arkansas was captured on video beating a DC Metropolitan Police officer, identified as “B.M.,” using a flagpole bearing an American flag. According to the FBI charging document, Stager later said on video that “everybody” in the Capitol “is a treasonous traitor,” and that “death is the only remedy.” He later claimed to a confidential FBI source that he thought he was attacking “ANTIFA,” even though “METROPOLITAN POLICE” was clearly visible on the back of the officer’s uniform in all capital letters.

“The fighting…was nothing short of brutal,” Fanone wrote in a May 5 letter to Congress. He described how he’d been “pulled into the crowd, away from my fellow officers, beaten with fists, metal objects, stripped of my issued badge, radio and ammunition magazine and electrocuted numerous times with a Taser.” Court records allege that someone in the mob tried to take Fanone’s gun as well, yelling that they were going to kill him with it.

Fanone says “I struggle daily with the emotional anxiety of having survived such a traumatic event but I also struggle with the anxiety of hearing those who continue to downplay the events of that day and those who would ignore them altogether with their lack of acknowledgement.” pic.twitter.com/f13ubLdG4H

Fanone praised the camaraderie displayed by his fellow officers that day, but said he still struggles with what happened. “As the physical injuries gradually subsided in crept the psychological trauma,” he wrote. “I struggle daily with the emotional anxiety of having survived such a traumatic event but I also struggle with the anxiety of hearing those who continue to downplay the events of that day and those who would ignore them altogether with their lack of acknowledgement. The indifference shown to my colleagues and I is disgraceful.”