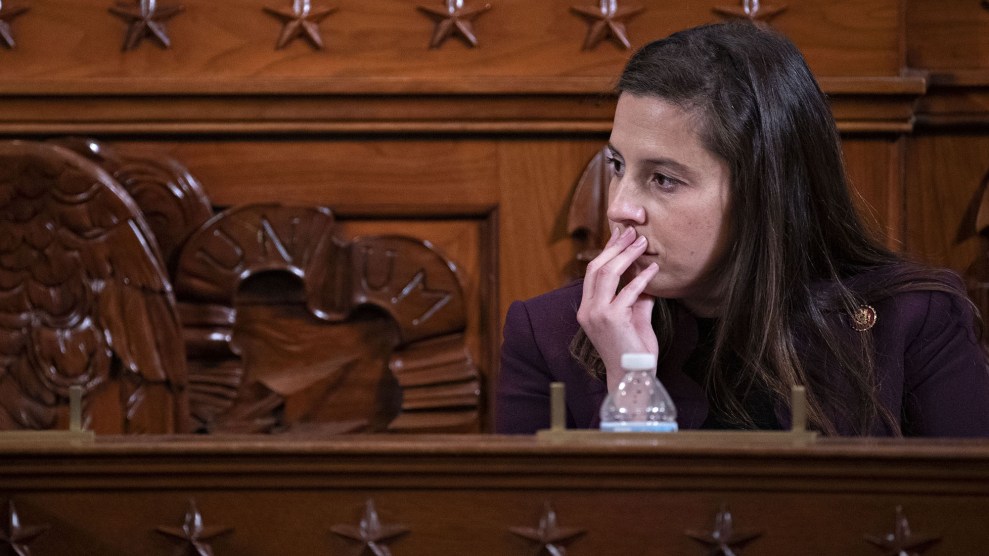 On Wednesday, as GOP rivals in Congress vied to strip her of her leadership role for her criticism of ex-president Donald Trump, Wyoming Rep. Liz Cheney, the chairwoman of the House Republican Conference, gave her party an ultimatum. “The Republican Party is at a turning point,” she wrote in the Washington Post, “and Republicans must decide whether we are going to choose truth and fidelity to the Constitution.”

The decision had already been made. CNN’s Manu Raju reported that Cheney’s colleagues were poised to anoint a successor—Elise Stefanik, a 36-year-old fourth-term congresswoman from Upstate New York, who has been endorsed for the job by Trump himself. In a thorough write up of the power struggle, the New York Times describes Stefanik’s career as a political “metamorphosis”:

While she began as one of the more moderate members of the Republican Conference—her voting record is far less conservative than Ms. Cheney’s, according to the conservative Heritage Foundation—Ms. Stefanik became one of Mr. Trump’s most strident loyalists. That role has buoyed her rapid ascension and brought in millions of dollars in campaign donations.

Stefanik’s political rise is a familiar Washington tale. After graduating from Harvard, she joined George W. Bush’s White House, worked in Republican policy circles for a few years, and served as a staffer for Paul Ryan during his vice presidential campaign. Then, in November 2012, she decided to suddenly leave all that behind to take a job in sales at her parents’ successful plywood company. She moved back to New York—not to the Albany area where she grew up and the business was headquartered, but to her family’s vacation home in Willsboro, a few hours north.

When, a few months later, Stefanik announced that she was running for Congress, these steps made a lot more sense. She described herself in one newspaper op-ed as “a small businesswoman who works in North Country sales, marketing and management” for a family business. Another local newspaper described her as “a businesswoman from Willsboro.” Campaign ads made it seem as if Willsboro was her actual hometown. (Residents of Willsboro told North Country Public Radio they’d never even heard of her.)

This kind of choreographed homecoming is a rite of passage for Washington political professionals. Jonah from Veep did it. (“Vote for Jonah Ryan–the outsider!“) Paul Ryan did it. Actually, so did Liz Cheney. But Stefanik told Politico that she hadn’t moved Upstate with the intention of running for office at all. She had just been that affected by the perspective she’d gained outside the “Beltway Bubble.”

That outsider’s perspective was a core part of her pitch. “I don’t look like a typical candidate,” Stefanik said at one point during the race. “But what I’ve realized is people have been really looking for someone who isn’t necessarily the status quo in Washington.” She was promising “new ideas.”

Stefanik was different from her Republican colleagues in a notable way—when she took office in January of 2015, she joined a Republican caucus that consisted almost entirely of older men, something she’s challenged party leaders in the intervening years to change. But in another sense, she was the purest form of Washington Republican—a creature of think tanks and campaigns and 1600 Pennsylvania Ave. When she started an online magazine for conservative women in 2009 called “American Maggie” (named for Margaret Thatcher), as North Country Public Radio reported, she got Mary Matalin, Ed Gillespie, and Dana Perino to be on the advisory board. She was a liaison for lobbyists during the 2012 Republican National Convention. She’d hosted a fundraiser for Tim Pawlenty at a $1.3 million investment property she owned near the Capitol. She won her primary with more than $1 million in outside spending from Karl Rove’s super PAC and the hedge-fund billionaire Paul Singer. You can be an outsider plywood saleswoman bucking the status quo with fresh ideas or you can be the person who literally introduced Joel Kaplan, the Facebook lobbyist, to Facebook (they were working together at the time, in the White House), but these really are two different categories of people.

Stefanik’s first term in Washington was a famously tumultuous one for her party, and Stefanik, like Ryan, did her best to leave all of her options option—when reporters tried to ask her about Trump in 2016, she literally ran away.

But when Trump did win (and by a huge margin in her district), that caution went away. Stefanik distinguished herself as Trump’s most ardent defender on the House Judiciary Committee in the run-up to Trump’s first impeachment trial, and raised big bucks off her newfound celebrity. Rather than run from Trump (and reporters) again in 2020, she ran as a proud Trump ally; after a mob sacked the Capitol in January, she voted with most of her caucus to overturn the presidential election results in Pennsylvania. In an interview Wednesday with a David Lynch character vaguely resembling Steve Bannon (or maybe that was Steve Bannon?), she said she supported the ongoing election “audit” in Arizona, where a company calling itself the “Cyber Ninjas” was inspecting ballots at an old basketball arena to determine whether they were bamboo forgeries from Asia.

— The Republican Accountability Project (@AccountableGOP) May 6, 2021

This kind of behavior is often presented as, in the words of the Times, a metamorphosis, but that’s not really what it is. The circumstances changed for Stefanik, but not the instincts; the kind of person who spends several months moonlighting as a small businesswoman from a politically neglected rural area in order to move up the ladder in the city where she spent her entire professional career is very much the kind of person who, when it becomes politically convenient, also decides to become a devoted super-fan of a loathsome grifter she once kept at arm’s length.

Liz Cheney is the story of how Bush administration loyalists—promoters, in their own time, of another Big Lie, the invasion of Iraq—fell out of favor with the Republican Party. But Elise Stefanik is the story of how most of them actually didn’t, and it’s the far more prevalent one. For every ex-hardliner with a CNN gig, or every legacy admission on the outs, there are many, many more rank-and-file officials, staffers, fundraisers, and consultants with none of the same family entanglements who haven’t thought twice about falling right in line. There’s no civil war in Trump’s GOP, not really. Just a whole lot of careerists angling their sails once more to ride the shifting winds.