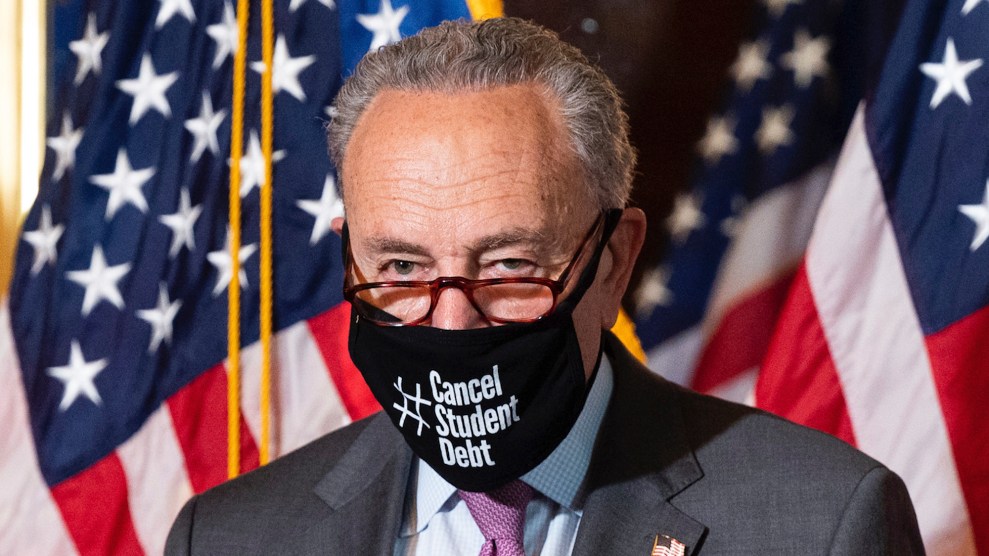 First, there was Biden’s interview with New York Times columnist David Brooks, who described Biden as “suspicious” of the sweeping debt cancellation plans, such as those favored by Sens. Elizabeth Warren (D-Mass.) and Chuck Schumer (D-N.Y.) that would cancel up to $50,000 per borrower. “The idea that you go to Penn and you’re paying a total of 70,000 bucks a year and the public should pay for that? I don’t agree,” Biden said. Then, the Washington Post reported that the White House’s budget proposal, due out this week, would not include student debt forgiveness, breaking a campaign promise to write off $10,000 through an act of Congress. Last month, Schumer told the New York Times that he remained “at loggerheads” with Biden over student debt.

But on Capitol Hill, last week’s budget news left the staunchest advocates for debt cancellation unfazed. “Did you expect it to be in there?” mocked one aide to a senior Democratic senator supportive of cancellation when I texted about the Post story, dubious Biden would actually announce such a policy through his budget. If anything, those Democrats were privately pleased: The absence from the president’s budget—which is essentially just a wishlist list for what Biden wants Congress to pass—left open the possibility that he might use executive powers to cancel student debt, as Schumer and Warren have called for. Yes, Biden reneged on his campaign promise—to perhaps replace it with something closer to what advocates want.

It’s still early, but a few initial moves from Biden’s time in the White House indicate that he’s more ready to acknowledge that the country’s outstanding $1.7 trillion in student loan debt is the result of a broken and punishing system. He might not quite get to the $50,000 mark progressives have called for—or even any kind of wide-scale cancellation—but he has, through administration hires and early executive actions, demonstrated he’s thinking about the issue. But he faces a looming deadline that could see progressives turn on him if he hasn’t made progress on forgiveness.

Biden took an initial stab at the problem by extending the pause on student loan payments that began under President Trump until the end of September. In April, Education Secretary Miguel Cardona joined Schumer and Warren for a roundtable discussion with indebted borrowers to discuss debt cancellation, a tacit acknowledgement about the scale of the issue from a member of the president’s cabinet. “You sharing your story…helps create a picture of what this is,” Cardona said after hearing the borrowers’ remarks. And earlier this month, Biden named Richard Cordray, a staunch consumer rights defender, to oversee the federal student aid program, a hire advocates applauded as favorable to their cause.

Cordray served as the first director of the Consumer Finance Protection Bureau from 2012 and 2017, where he earned a reputation as a tough watchdog on student loan practices. He is a close ally of Warren, who set up the CFPB and has aggressively fought both the Education Department and White House over student debt matters since she arrived in the Senate in 2013. Advocates see him as a key player in advancing the argument for cancellation: The office he now leads warehouses the data on student loan borrowers, much of which has never been made public. “By gaining access to different research, there’s a way that he can prove the point for debt cancellation,” says Natalia Abrams, the executive director of Student Debt Crisis.

In March, before Cordray was hired, the Education Department announced that it would provide full debt relief for roughly 72,000 students defrauded by “diploma mill” for-profit colleges, reversing a Trump-era rule that offered only partial relief based on borrowers’ wealth. It also took steps to forgive the debts of 400,000 borrowers who had become completely disabled after receiving their degrees, something those borrowers are entitled to under law but struggled to access thanks to bureaucratic hurdles the Education Department enacted under Trump’s Secretary of Education Betsy DeVos. The decision hadn’t fully appeased activists—it sidestepped a simpler forgiveness process they’d laid out—but Cordray’s hire offers the promise that future decisions will have borrowers at the heart of things. “If people are going to be left with debt, they need to be protected from servicers, collectors, and lenders,” says Seth Frotman, the executive director of the Student Borrower Protection Center, an advocacy group, and former student loan ombudsman at the CFPB who worked closely with Cordray.

And there’s still much to be done. Hundreds of thousands of additional fraud claims still haven’t been resolved, and in many instances, the Education Department is still defending lawsuits defrauded borrowers brought against DeVos, who ground fraud relief programs to a standstill and scoffed at the “so-called free money” borrowers are legally owed. The cases could be dropped as Cardona reverses Trump-era policies—a process that officially kicked off on Monday—but may not be done by the time the payment pause lifts. “We shouldn’t be turning payments back on before we make sure the people who have been defrauded by their schools get the relief they’ve earned,” Frotman says. Cancellation hopefuls point out that forgiving broad swaths of debt could make alleviating all of these issues easier—if for no reason other than it would shrink down the size of the outstanding loan portfolio.

Meanwhile, the White House asked Cardona last month to draft a memo on the president’s authority to cancel up to $50,000 in debt, and requested that the Justice Department review the legality of such a move earlier this year. Advocates have questioned the need for such a review, given that both Presidents Barack Obama and Donald Trump used their executive authority to relieve debt for narrowly defined groups of borrowers. But it’s for that reason there’s optimism that the memos, expected any day now, will confirm the president can cancel wide swaths of debt. (An Education Department spokesperson said in a statement, “We are working closely with the Department of Justice and the White House as quickly as possible to review all options regarding student debt cancellation.”)

Legal standing is one matter, but political will is another. Biden’s portrayal of a silver-spooned Ivy League graduate seeking a government handout isn’t a helpful one from advocates’ perspectives—nor is it far off from how congressional Republicans talk. Schumer, Warren, and their House and Senate allies have pushed back on that characterization by pointing out that it is lower-income borrowers—and especially Black and brown students—who disproportionately shoulder the debt, and that canceling debt would go far to close the racial wealth gap, a stated objective of Biden’s White House. Black college graduates owe an average of $25,000 more than their white counterparts, according to research from the National Center for Education Statistics. “A degree on a Black resume does not yield the same returns as the same degree on a white one,” Darryl, a young man who owes $90,000 in student debt, told Cardona during the roundtable with Warren and Schumer.

Timing may force the issue. The pause on payments and interest on loans is set to expire at the end of September. Cardona has not ruled out extending the deadline, but if that pause is not extended without any associated cancellation, Democrats will be holding the bag for bringing the payments back for millions of borrowers—which could come back to haunt them in the 2022 midterm elections. Capitol Hill’s cancellation boosters have taken to reminding Biden of the political inconvenience: Warren and other congressional Democrats have sent the Education Department a series of letters asking about its plans for starting repayments, hoping a steady drumbeat will keep attention on the political pressures. “It’s the same argument as the checks,” Schumer told the Times in April, referring to the overwhelmingly popular direct payments Americans received from the COVID relief packages. “Do you help middle-class people who are in this bind?”

During Senate negotiations over the COVID relief package, Schumer protected a measure to guarantee that any forgiven student debt, should Biden heed their call, be tax-free. He’s taken to treating his face masks like lucky legislative talismans, noting a few weeks ago that every mask he’s worn with a bill slogan—“Save Our Stages,” “#SaveRestaurants,” “#StopAsianHate”—have all passed the Senate. “I’ll have to start wearing a lot more masks that talk about legislation!” Schumer joked last month. As of late, he’s kept his “#CancelStudentDebt” covering in heavy rotation.