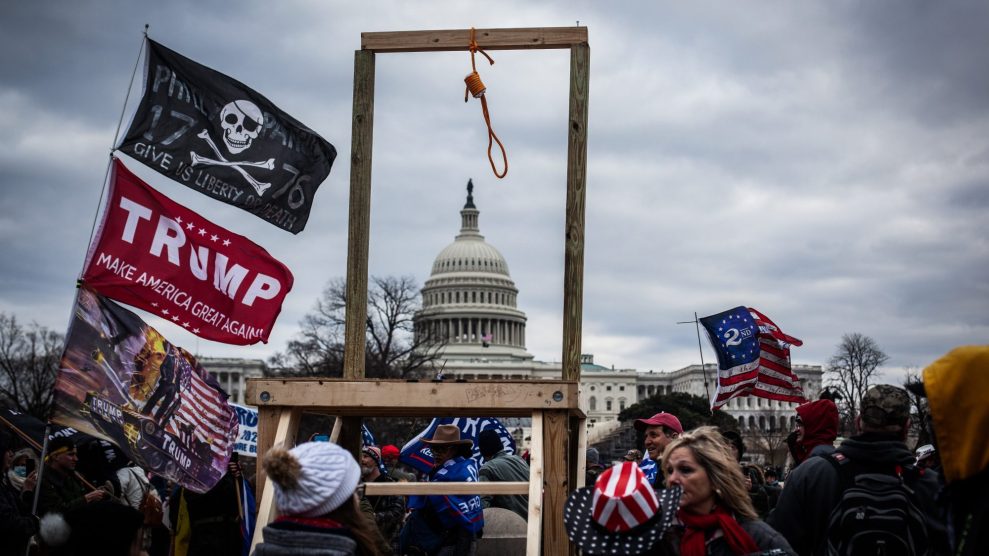 Trump supporters near the U.S. Capitol on January 06, 2021Shay Horse/NurPhoto/Getty

National Guard troops recently departed from protecting the US Capitol, but the broader danger from right-wing extremists is far from gone. As the FBI continues its sprawling investigation into the January 6 assault on Congress by Trump supporters, evidence continues to cast light on suspects who appeared intent on violently attacking the former president’s avowed political enemies. Now, a federal judge has joined a growing list of prominent figures warning that the security threat remains serious, as Trump and numerous Republicans continue to promote the insurrection’s animating lie that the 2020 election was “stolen.”

In a partially redacted opinion unsealed on Wednesday, US District Court Judge Amy Berman Jackson declined pretrial release from jail for Cleveland Meredith Jr., who is charged with making death threats against House Speaker Nancy Pelosi and traveling to the nation’s capital on Jan. 6 unlawfully armed. Jackson wrote that the risk that Meredith might try to harm public officials or others was too substantial for him to be freed from custody, and attributed that danger in part to the continuation of Trump’s Big Lie: “The steady drumbeat that inspired defendant to take up arms has not faded away; six months later, the canard that the election was stolen is being repeated daily on major news outlets and from the corridors of power in state and federal government, not to mention in the near-daily fulminations of the former President.”

According to prosecutors, the defendant traveled to Washington with a Glock 19 pistol, a Tavor X95 assault rifle with a telescopic sight, and more than 2,500 rounds of ammunition.

The alleged evidence against Meredith gathered by the FBI included text messages he sent to friends the day after the Capitol siege, in which he talked of killing the House Speaker: “I’m gonna run that CUNT Pelosi over while she chews on her gums,” and, “Thinking about heading over to Pelosi CUNT’s speech and putting a bullet in her noggin on Live TV.”  In another message, he expressed a willingness to die fighting: “I ain’t goin to jail, the morgue maybe, not jail.”

Meredith’s defense attorney argued that his client’s “allegedly threatening communications were not meant to be taken seriously,” citing another message in which he wrote, “LOL. I’m just having fun.”

Jackson was having none of it. “The problem with this argument, of course, is that defendant’s statements were not the least bit funny,” she wrote. “No one was laughing out loud then or now.” Jackson’s concern wasn’t just a matter of Meredith’s vicious language; she reiterated how he had driven from Colorado to Washington with a trailer full of weapons. His arsenal, according to prosecutors, included a Glock 19 pistol, a Tavor X95 assault rifle with a telescopic sight, and more than 2,500 rounds of ammunition, including 320 armor-piercing rounds and multiple high-capacity magazines.

Jackson’s opinion comes as Republican leaders in the Senate reject a bipartisan commission to investigate one of the worst attacks on Congress in the nation’s history, including its causes. But even as Minority Leader Mitch McConnell and his colleagues seek to block further scrutiny of the disaster—perhaps fearing what more that might reveal about their complicity—a bipartisan group of veteran national security experts previously concluded that Trump is the de facto leader of a domestic terrorism movement. As I first reported last December, the former president used a method known as stochastic terrorism to incite violence and try to cling to power, according to former top Homeland Security officials and other experts. One former senior national security official in the George W. Bush administration described Trump as “an arsonist of radicalization.”

In April, a bipartisan group of 140 former senior national security, military, and elected officials called on Congress to create the 1/6 commission, expressing in a letter “great urgency in light of what we collectively see as an exigent and growing threat. The events of January 6th exposed severe vulnerabilities in the nation’s preparedness for preventing and responding to domestic terrorist attacks.”

In notably stark terms, a federal judge involved in handling the aftermath has now also highlighted the ongoing danger.