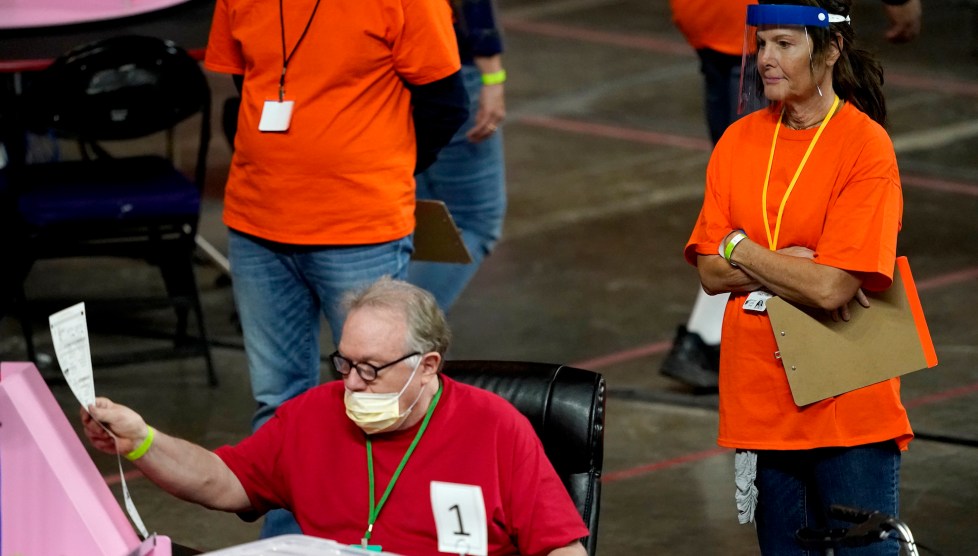 Maricopa County ballots cast in the 2020 general election are examined and recounted by contractors working for Florida-based company Cyber Ninjas on May 6 in Phoenix. Matt York/AP

Donald Trump will not be “reinstated” as president by August, as some of his supporters and allegedly the former president himself seem to believe. But Republicans are rushing to change the rules to make it easier for their party to overturn the will of the voters in future elections.

While GOP-controlled legislatures rush to make it harder for Democratic constituencies to vote, they are also intensifying their control over how elections are run and how votes are counted, after Trump tried to overturn the 2020 election results. Twenty-four new laws have been passed in 14 states this year that will allow state legislatures to “politicize, criminalize, and interfere in election administration,” according to a report released Thursday by three voting rights groups, States United Democracy Center, Law Forward, and Protect Democracy. Overall, 216 bills have been introduced in 41 states to achieve these ends.

When Texas Republicans scrambled to pass a massive voter suppression bill over Memorial Day weekend, they included a provision written behind closed doors with no public scrutiny that would make it easier for judges to throw out election results. Under the plan, losing candidates would no longer have to prove that individual fraudulent votes swung the election but rather that the number of allegedly fraudulent votes exceeded the margin of victory—which is exactly what Trump falsely alleged in 2020. The measure would also lower the burden of proof needed to demonstrate illegal voting, so that candidates only have to show a “preponderance of evidence” instead of “clear and convincing evidence.”

“They could use this to overthrow the voice of the people,” Democratic state Rep. John Bucy III said on the House floor. “We no longer have to prove voter fraud to overthrow an election result, we can simply do it.” Though the bill failed to pass when House Democrats staged a dramatic walkout, denying Republicans the quorum needed to approve it, it is expected to be resurrected at a special legislative session later this year.

Other GOP-controlled states have already changed their laws to make it easier to void election results. As part of its sweeping voter suppression law, Georgia’s heavily gerrymandered legislature removed Georgia secretary of state Brad Raffensperger as the chair and a voting member of the state election board after he rebuffed Trump’s attempt to overturn Joe Biden’s victory. The legislature will now appoint a majority of board members, and the board, in turn, can take over up to four county election boards it deems “underperforming”—raising the prospect that Republicans could assume control of election operations in heavily Democratic areas like Atlanta’s Fulton County. In concert with a provision allowing right-wing groups to mount an unlimited number of challenges to voter eligibility, these changes will make it easier for Republicans to contest close elections and possibly overturn the results.

“The 2021 state legislative season may ultimately prove to be a turning point in the history of America’s democracy.”

A similar law passed in Arkansas would allow the State Board of Election Commissioners, which has a strong GOP majority, to decertify election results if they find a “violation of the voter registration laws or election laws” and to take over county election operations in “severe” cases. The state police would also be authorized to look into alleged cases of illegal voting, which could have a chilling effect on voter participation.

“I’m very worried that now we have a new playbook that partisans across the country are going to start using to try to affect and influence the outcome of elections,” Washington Secretary of State Kim Wyman, a Republican, said on a call with reporters on Thursday.

In five GOP-run states—Georgia, Florida, Kansas, Kentucky, and Montana—the legislature has usurped election authority that previously belonged to other state officials, according to the Brennan Center for Justice. These moves include measures to prevent governors or secretaries of state from modifying election laws or procedures without legislative approval, even in an emergency situation like a pandemic or natural disaster. Some of these efforts are nakedly partisan: In Arizona, where the state Senate has authorized a sham “audit” of 2.1 million ballots in Maricopa County designed to weaponize Trump’s Big Lie about fraud in 2020, a House committee recently passed a provision preventing the Democratic secretary of state from defending state election laws and transferring that power to Arizona’s Republican attorney general—but only through the 2022 election, in case the partisan composition of the offices is reversed after that. Meanwhile, Republicans in states like Georgia, Pennsylvania, and Michigan are attempting to replicate Arizona’s discredited audit.

These bills are part of the greatest assault on voting rights since the end of Reconstruction. (During the Jim Crow era, segregationist white Democrats also consolidated control over election administration.) And they raise the likelihood of a nightmare scenario where GOP-controlled state legislatures use their increased power to override a Democratic victory in 2024 or persuade Republicans in Congress, if they regain power in 2022, to do the same.

“The 2021 state legislative season may ultimately prove to be a turning point in the history of America’s democracy,” the new report states. “These are the ingredients for a democracy crisis.”