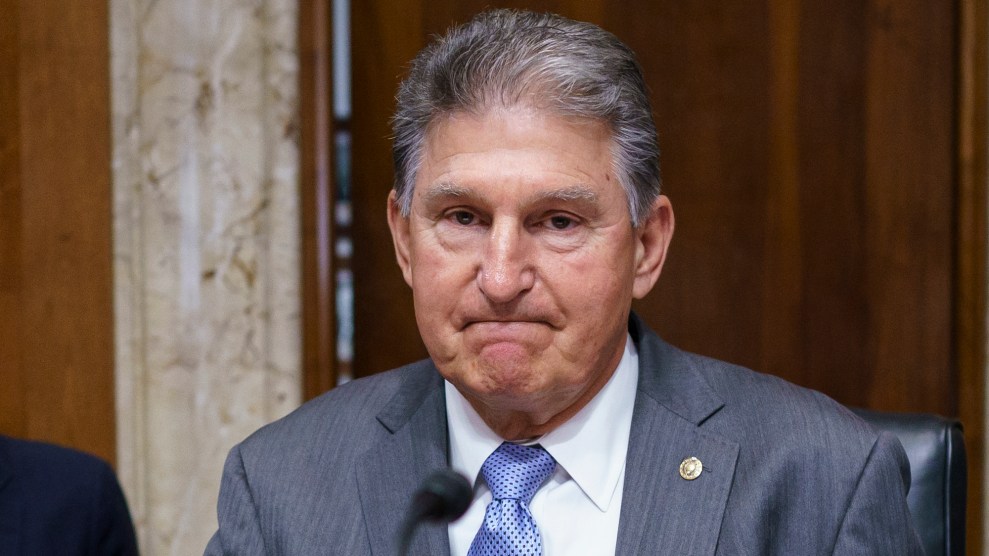 Sen. Joe Manchin arrives for a hearing at the Capitol on June 8. J. Scott Applewhite/AP

“The right to vote is fundamental to our American democracy and protecting that right should not be about party or politics,” Sen. Joe Manchin (D-W.Va.) wrote in an op-ed on Sunday. Then he proceeded to explain that he would vote against a sweeping democracy reform bill because no Republicans are backing it.

Manchin, a swing senator whose support is required to eliminate the filibuster in order to pass any voting measure facing GOP opposition, said he couldn’t endorse the For the People Act, also known as HR 1, which would guarantee certain voting rights, such as automatic registration and early voting, and preempt states from curtailing them. But he did back another bill aimed at protecting voting rights, the John Lewis Voting Rights Advancement Act, which has minimal Republican support: It’s co-sponsored by Sen. Lisa Murkowski (R-Alaska).

The problem, say Democrats and voting rights advocates, is that the bill named for the late civil rights champion John Lewis falls well short of what’s needed to reverse the wave of new voter suppression laws being enacted by Republicans at the state level. The bill, also known as HR 4, would restore the requirement that states with a history of discrimination receive federal approval for any voting changes, after the Supreme Court gutted a similar provision of the 1965 Voting Rights Act in 2013. But it would not block new voting restrictions that have already been passed in states like Georgia, Florida, and Iowa, nor does it address issues like partisan gerrymandering and dark money that are entrenching the power of Republicans in swing states across the country.

“H.R. 4 must be passed,” Speaker of the House Nancy Pelosi wrote to her colleagues on Tuesday, “but it will not be ready until the fall, and it is not a substitute for H.R. 1.”

“The John Lewis Voting Rights Advancement Act builds for us the fire station to protect us against future fires,” Sen. Raphael Warnock (D-Ga.), who was elected in January amid his state’s Democratic shift that could be undone by new voting restrictions, told reporters recently. “But the house of democracy, as a result of these voter suppression bills all across the country, is on fire right now.”

In a meeting with Manchin on Tuesday, civil rights leaders stressed that the For the People Act would more directly combat many of the recently passed state-level voting restrictions by instituting policies that would expand voting access for federal elections, such as automatic and Election Day registration, two weeks of early voting, and no-excuse mail-in voting. It would reverse specific policies enacted by GOP-controlled states this year, such as curtailing mail ballot drop boxes, preventing election officials from sending out mail ballot request forms, and making it easier to remove voters from the rolls. (Manchin said the meeting did not change his position.)

HR1 would thwart virtually every single GOP voter suppression tactic. This is why Mitch McConnell so terrified of it https://t.co/cnTHkSJg4X pic.twitter.com/2eesvHKUBE

It would also tackle the root causes of voter suppression. Since many of the restrictive voting bills have been passed by heavily gerrymandered legislatures, the bill would require independent redistricting commissions for congressional races. And it addresses the role of dark money by requiring groups with secret donors to disclose more of their spending and adopting public financing for congressional campaigns. The linkages between dark money and voter suppression were made evident when Mother Jones published a story last month showing how the conservative group Heritage Action for America, whose donors are secret, bragged in a leaked video about writing “model legislation” making it harder to vote in key battleground states. Jessica Anderson, the executive director of Heritage Action, said the group had “a bit of fun with Manchin” by holding a rally in West Virginia pressuring him to oppose HR 1 and keep the filibuster.

The For the People Act also applies to all 50 states, setting uniform rules for federal elections rather than more narrowly prohibiting racial discrimination in voting in select places. Manchin has called for the the John Lewis bill to be amended to apply to all 50 states, but that could put the preclearence requirement in legal jeopardy before the Supreme Court, since it would no longer be targeted at states where voting discrimination has been most prevalent.

“Any proposal that shuns H.R. 1 in favor of nationwide preclearance alone is either dangerously naive or simply misinformed about what is happening in states across the country,” Democratic Reps. Mondaire Jones (N.Y.), Val Demings (Fla.), Colin Allred (Texas), and Nikema Williams (Ga.) wrote in a recent letter to their colleagues. “Restoring preclearance is vitally important. But the preclearance system would not ensure free and fair elections in Georgia, Florida, Texas, and other states that have passed draconian voting laws.”

“The house of democracy, as a result of these voter suppression bills all across the country, is on fire right now,” said Sen. Raphael Warnock.

Manchin’s fetish for bipartisanship strikes his colleagues as particularly naïve at a time when Republicans are unilaterally rewriting the rules at the state level to make it harder for Democrats to win elections. And the Democratic House members note that even though the John Lewis bill has one GOP co-sponsor, “preclearance is no more likely to get 10 Republicans votes in the Senate than the For the People Act”—in other words, passing it would likewise require scrapping the filibuster, which Manchin says he will not do. Moreover, both bills are very popular among the public—with support from around 70 percent of Americans, including a majority of Republicans—suggesting that they have bipartisan support among voters if not GOP elected officials. Indeed, Manchin co-sponsored the For the People Act in the previous Congress.

But the outcome voting rights advocates fear most isn’t that one bill will pass over the other, but that neither will. I recently wrote a cover story for Mother Jones about the striking similarities between the current wave of voter suppression and the effort to roll back voting rights at the end of Reconstruction, and one of the major takeaways is how Congress could have stepped in to protect voting rights back then but chose not to.

As Mississippi approved a new state constitution to disenfranchise Black voters in 1890, the House of Representatives passed a bill sponsored by Rep. Henry Cabot Lodge (R-Mass.) requiring federal supervision of elections to override state voter suppression efforts. But Southern Democrats filibustered the bill in the Senate (back then, the role of the parties was reversed on civil rights), and a handful of Western Republicans from sparsely populated mining states, who wanted to promote the free coinage of silver instead of protecting voting rights, ultimately joined them to kill it.

One of the key defections came from Sen. William Stewart (R-Nev.), who had sponsored the Fifteenth Amendment to enfranchise Black men and prevent racial discrimination in voting but opposed the Lodge bill, saying it would “increase sectional animosities and kindle anew the discords of the past.”

“I am too angry to write,” wrote Sen. John Spooner (R-Wis.). “We are fallen upon bad times for the party. The Confederacy and the Western mining camps are in legislative supremacy. Think of it—Nevada, in 1870 about 45,000 people, in 1880 about 65,000, and in 1890 about 47,000— barely a respectable county, furnishes two senators to betray the Republican Party and the rights of citizenship for silver.”

History is now repeating itself with Manchin, who claims that the right to vote is “fundamental” but is refusing to take aggressive action to stop the greatest rollback of voting rights since the end of Reconstruction.