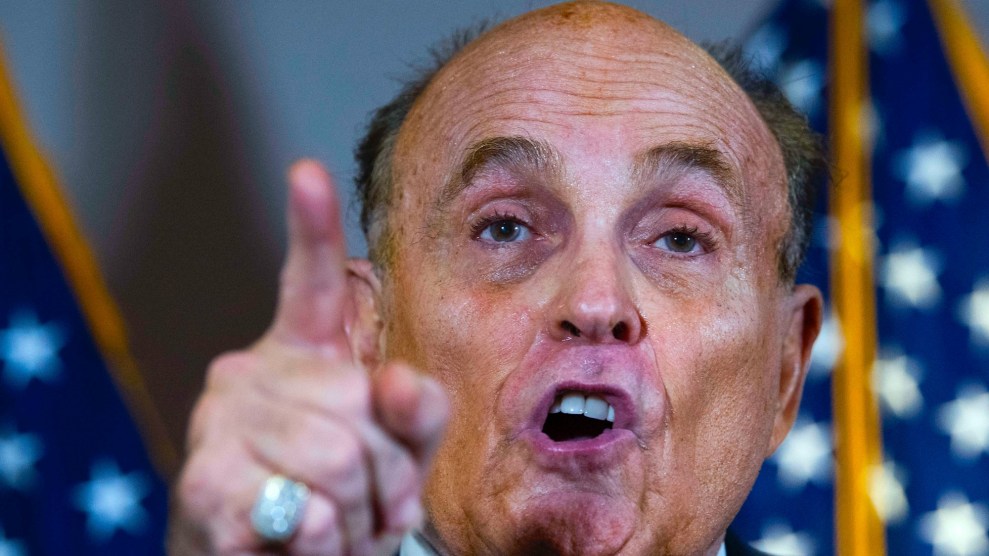 On June 18, Ukraine’s government slapped two of the country’s oligarchs, Dmytro Firtash and Pavel Fuks, with sanctions for allegedly corrupt business dealings. One thing they have in common: Rudy Giuliani.

Ukraine’s National Security and Defense Council accused Firtash, a controversial tycoon who first got rich shipping Russian natural gas, with supplying the raw materials for titanium to the Russian military, which invaded Ukraine in 2014 and currently supports separatists waging war in the country’s eastern Donbas region. Fuks, who amassed his fortune as a Moscow real estate developer, was sanctioned for illegally obtaining oil and gas licenses via the kleptocratic and Putin-aligned regime of former Ukrainian President Viktor Yanukovych.

Giuliani, who faces a criminal investigation resulting from his 2019 effort to dig up negative information on Joe Biden in Ukraine, has ties to both oligarchs. (A New York appellate court suspended Giuliani’s law license on Thursday over another matter, citing “demonstrably false and misleading” statements he made in court and elsewhere about the 2020 election.)

In 2019, Giuliani sought Firtash’s help pushing bogus claims that Biden, as vice president, had pressured Ukraine to fire a top prosecutor to derail an investigation of Burisma, a Ukrainian energy company where Hunter Biden served as a board member. (Biden had indeed pushed for the removal of the prosecutor, Viktor Shokin, but that was because the official was not pursuing anti-corruption investigations vigorously enough.) For the past seven years, Firtash has been fighting extradition to the United States, where he faces charges for allegedly bribing Indian government officials to secure a contract with Boeing. In 2017, prosecutors in that case labeled Firtash an “upper-echelon” associate of “Russian organized crime,” an allegation he denies.

In 2019 Lev Parnas, a Ukrainian American Giuliani associate (who also now faces criminal charges), urged Firtash to hire two lawyers close to Giuliani, Victoria Toensing and Joe diGenova, a married couple friendly with then–Attorney General Bill Barr. Firtash later told the New York Times that Toensing and diGenova said they would use their influence to press for the Justice Department to withdraw evidence used in the case against him. (Toensing and diGenova eventually raised Firtash’s case in a personal meeting with Barr.) According to Parnas’ lawyer, Joseph Bondy, the lawyers wanted Firtash’s help in exchange. “Per Giuliani’s instructions,” Bondy told the Times, Parnas “informed Mr. Firtash that Toensing and diGenova were interested in collecting information on the Bidens.”

This arrangement resulted in Giuliani citing unfounded claims about Biden that had been generated by Firtash’s legal team. In one example, in September 2019, Giuliani appeared on television touting an affidavit from Shokin, the prosecutor whose ouster Biden urged, containing allegations about Biden. Shokin says in the affidavit that he was speaking “at the request of lawyers acting for Dmitry Firtash.”

But in a statement, Lanny Davis and Dan Webb, attorneys for Firtash, disputed their client’s connection to Giuliani. “Despite multiple misreporting through the media and on the Internet, it is fact that Dmytro Firtash never talked to or met with Giuliani and had nothing to do with Giuliani’s or anyone’s effort to dig up dirt on Mr. Biden or his son. It is a flat out lie if anyone states otherwise.”

Giuliani said in 2019 that he had “nothing to do with Firtash,” though he was working closely with Firtash’s lawyers at the time.

Davis, a lawyer who represents Firtash in the United States, declined to comment on the oligarch’s connection to Giuliani, but he disputed the basis for the new Ukrainian sanctions. Firtash “has not been given advance notice nor has he had the opportunity to challenge the allegations before the Security Council.” Davis said that “Mr. Firtash categorically denies the allegations, which he says are wrong.”

Giuliani does acknowledge working with Fuks, the other recently sanctioned Ukrainian oligarch. Giuliani previously told Mother Jones that in 2017 Fuks hired Giuliani Security & Safety, a consulting firm the former mayor runs, to advise Kharkiv, Ukraine’s second-largest city, on “security and emergency management.” Fuks has offered a different account. He claimed in 2018 that he hired Giuliani to “create a U.S. office for supporting investment in” Kharkiv. And he later told the New York Times that Giuliani was “the lobbyist for Kharkiv and Ukraine.” Giuliani, who did not register with the Justice Department as a foreign agent in connection with the work, denies that.

Fuks has a colorful history. He has claimed he negotiated directly with Donald Trump between 2004 and 2010 about building a Trump-branded tower in Moscow, but the deal never advanced. Fuks, who relocated from Moscow to Kharkiv in 2015, was later hit with fraud charges in Russia and lost his citizenship there. (He says he renounced it.)

In 2017, when he hired Giuliani, Fuks was hoping to rekindle his relationship with Trump. He visited Washington for Trump’s inauguration. He later sued a Republican fundraiser and lobbyist, Yuri Vanetik, alleging that Vanetik defrauded him of $200,000 for what he thought would be VIP tickets to the event. Fuks was left watching Trump’s swearing-in from a hotel bar. Federal law bans foreign nationals from buying tickets from presidential inaugural committees; Fuks alleges that he was swindled in what would have been an illegal agreement. Fuks, who records show owned property in Miami Beach a decade ago, was barred from traveling to the US after his 2017 visit, a step he claims Vanitek influenced. (US authorities have not explained the reason for the travel restriction. Fuks’ lawsuit against Vanitek is scheduled to go to trial on July 6.

Vanetik, a US citizen born in Ukraine, denies promising Fuks inaugural tickets or influencing Fuks’ visa restriction. He has said the money Fuks paid him related to work he, like Giuliani, did for Kharkiv at Fuks’ behest, and that he had offered to help Fuks attend an inaugural ball, not the inauguration itself. This month, Vanetik responded by suing Fuks in state court in California, alleging that their dispute led Fuks to threaten to kill him and later to attempt to arrange to have Vanetik murdered. Vanetik say he has reported the threat to the FBI and sent a letter to the State Department that includes affidavits from four men who claim to have heard Fuks discussing plans for Vanetik’s murder.

Fuks denied Vanetik’s claims and called the lawsuit “nonsense” in a statement sent by a spokesperson. “For an assessment…it would be worth contacting specialists in the medical field, not the legal one,” Fuks said.

Fuks also disputed the basis for the sanctions in Ukraine. He said he never had any interest in the oil company whose activity was the cause for the sanctions and charged that the secretary of Ukraine’s National Security and Defense Council is working with one of Fuks’ business rivals. “I will defend my reputation in Ukrainian and international courts,” he said.

Fuks and Firtash join a lengthy list of Ukrainians linked to Giuliani who have been accused of malfeasance. A report declassified in March by the Office of the Director of National Intelligence suggested that Andriy Derkach, a Ukrainian legislator who the Treasury Department previously called “an active Russian agent,” used the former New York mayor to advance Russian disinformation intended to help Trump in the 2020 election. Last year, Treasury also sanctioned four other Ukrainians from whom Giuliani sought information, alleging they aided Russian interference efforts. Parnas and two other men who assisted Giuliani’s efforts have been charged in New York with fraud and campaign finance violations. Last week, FBI agents searched the home of a California businessman associate who helped Giuliani try to produce a documentary about the Bidens and Ukraine.

Giuliani did not respond to a request for comment this week. But he has previously addressed accusations about people he worked with in Ukraine by arguing he was professionally obligated to deal with them. “Where do you think you get evidence about horrible people?” Giuliani asked in a speech in New York this month. “From other horrible people.”