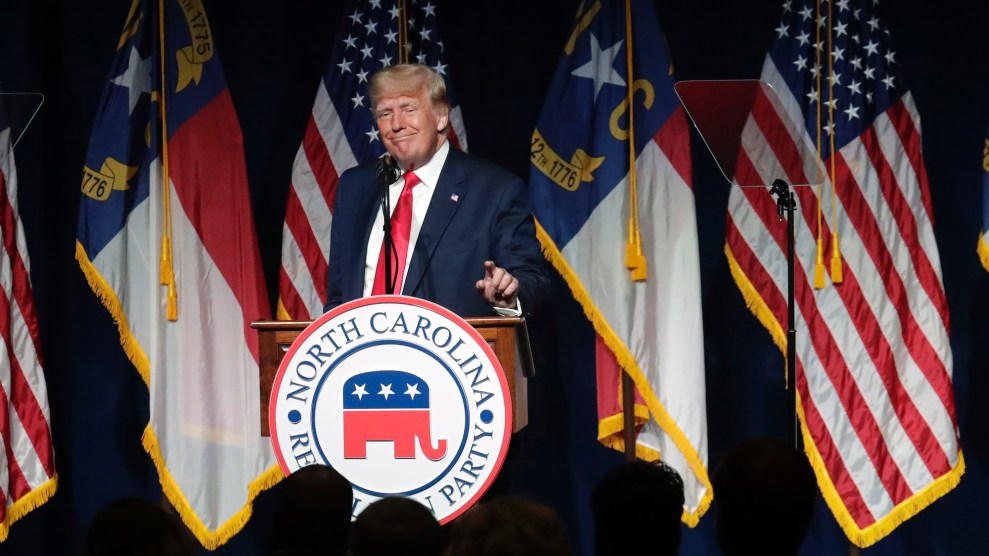 Former President Donald Trump appeared at North Carolina’s Republican Party convention last night and returned to his familiar playbook of stoking his dangerous disinformation campaign to undermine the integrity of the US electoral process and perpetuating the falsehood that he had won the 2020 presidential election.

“It was a third-world country election like we’ve never seen before,” Trump told the roughly 1,200 attendees. He called the 2020 presidential contest “by far the most corrupt election in the history of our country,” and will “go down as the crime of the century.”

“Remember, I’m not the one trying to undermine American democracy. I’m the one that’s trying to save it.”

The former president spoke admiringly of GOP lawmakers in Arizona who had forced an unjustified audit of the state’s election results and lauded Republicans in Georgia and Pennsylvania for attempting similar efforts. Trump also celebrated new laws passed in Georgia and Florida making it harder for Americans—especially Black and Latino voters—to cast their ballots. (A similar bill nearly passed in Texas, but the state’s Democratic lawmakers staged a walkout to deny the legislature the quorum it needed to bring the measure to a vote.)

Trump has been telling associates that he thinks he could be “reinstated” in the White House in August, the New York Times reported, and his online supporters have looked to the deadly coup in Myanmar as a model for their fallen leader’s return to power. Meanwhile, the former president spuriously claimed he was the defender of American freedoms. “They want to silence you,” Trump warned, knowing that his audience understood that “they” meant the Democratic Party, which currently controls both the White House and Congress. “They want to silence your voice. Remember, I’m not the one trying to undermine American democracy. I’m the one that’s trying to save it.”

“Remember, I’m not the one trying to undermine American democracy. I’m the one that’s trying to save it.”

Trump’s remarks in North Carolina marked only his second major public appearance since his term ended in January. The former president also spoke at the annual Conservative Political Action Conference in Orlando, Florida, in February. Both speeches lasted for over ninety minutes and both belabored similar themes: Propagating lies about the 2020 election, bashing President Joe Biden’s handling of the US-Mexico border, claiming that Biden is ruining the economy, blaming Dr. Anthony Fauci for America’s disastrous pandemic response, and condemning the “radical left” and “cancel culture” for “destroy[ing] the America we love.”

“We have to do so many things, or we’re not going to have a country,” Trump insisted. “If you don’t have election integrity and if you don’t have strong borders, our country can be run like a dictatorship and that’s what they’d like to do.”

His appearance also gave the de-platformed former president an opportunity to assert himself as the GOP kingmaker. He endorsed Rep. Ted Budd (R-N.C.) for North Carolina’s US Senate race in 2022, as several candidates eye the seat Sen. Richard Burr (R-N.C.) will vacate next year. Budd was among the 147 Republican House members who demonstrated their fealty to the former president by refusing to certify the outcome of the 2020 election on January 6. The announcement—a surprise even to Budd, according to the Washington Post—came just moments after Trump’s daughter-in-law Lara Trump, a former Fox News producer, announced she wouldn’t seek the seat after months of speculation she’d jump into the race.

Neither CNN, a network much maligned by the former president, nor Fox News, his one-time favorite, broadcast the speech. MSNBC carried just a portion, while reporter Ali Vitali offered analysis over much of Trump’s remarks. The former president remains banished from Twitter, and Facebook announced on Friday that Trump will be banned from its site until at least 2023. On Wednesday, Trump aide Jason Miller disclosed that Trump’s political operation had discontinued Trump’s blog, “From the Desk of Donald J. Trump,” after just one month, because it had become an object of ridicule and no one read it, according to the Post.

But neither a lack of coverage nor platform have weakened Trump’s grip on the GOP, and his baseless assertions remain its operating creed. Rep. Liz Cheney (R-Wyo.), after all, had been kicked out of House GOP leadership for her vocal opposition to the misinformation. A recent poll from CNN found that a majority of Republican voters still believe the 2020 election had been stolen from Trump, even though no widespread voter fraud ever has been identified despite repeated efforts—including from Mark Meadows, Trump’s former chief of staff, who squeezed the Justice Department to take Trump’s claims of election fraud seriously.

“There’s no better example of the Democrat and media corruption than the 2020 election hoax,” Trump told the assembled faithful in North Carolina. “They’ll never stop until November of 2024.”