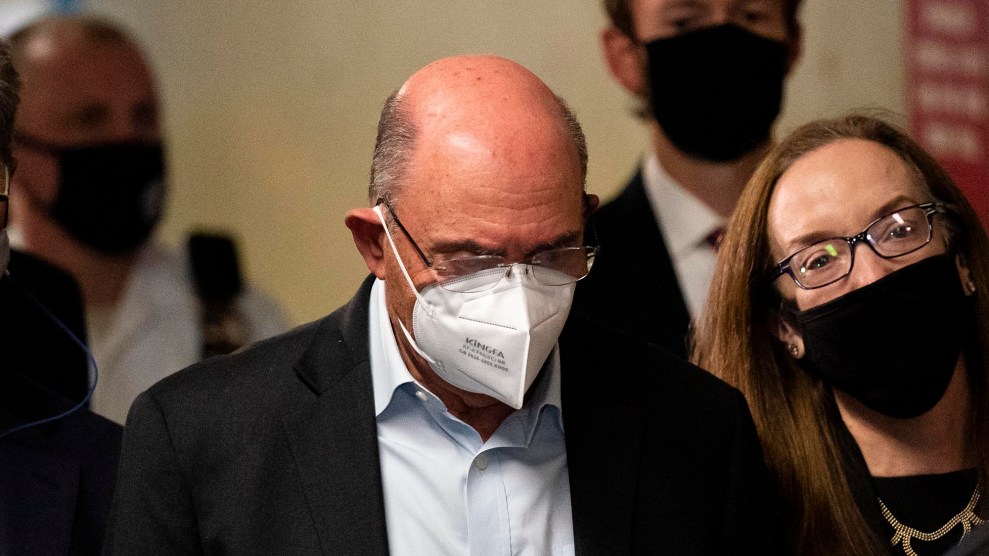 Allen Weisselberg is lucky. Certainly not because he and the Trump Organization, where he has served as chief financial officer for three decades, were indicted by the Manhattan district attorney for allegedly running a 15-year-long tax-fraud scheme. And not because he is being squeezed by prosecutors to flip on his boss, Donald Trump. And not because the company has been removing him from the leadership positions he held at dozens of its subsidiaries. Weisselberg is fortunate because in the middle of this headlines-generating controversy—the first criminal indictments against Trump’s self-branded company—he has been able to sidestep (at least for the moment) another legal mess.

In early 2020, Karl Racine, the attorney general of Washington, DC, filed a civil lawsuit alleging that Trump’s inauguration committee misused charitable funds to enrich the Trump family. As Racine put it, the Presidential Inaugural Committee (PIC) coordinated with the Trump clan to grossly overpay for event space in the Trump International Hotel in DC and improperly used tax-deductible funds to throw a private party there for Trump’s adult children costing several hundred thousand dollars. In short, the attorney general’s lawsuit accused the Trump crew of using the PIC for major grifting to the tune of about $1 million, and he is seeking to recover the money paid to the Trump hotel so those funds can be redeployed for real charitable purposes.

In May, Mother Jones reported that Weisselberg was tied to this scandal through a series of emails that showed that following the inauguration—after questions emerged in the media about the PIC’s unusual receipts and expenditures—he was asked by the PIC to review its internal financial numbers. This looks like an odd arrangement. Weisselberg was CFO for a corporation that received questionable payments from the PIC—payments that would later become the subject of this DC investigation. Why would the PIC forward Weisselberg its financial records so he could examine this material? Asked about this in May, Weisselberg’s lawyer Mary Mulligan replied, “No comment.”

Documents filed by Racine earlier this year in the DC case indicate that he suspects Weisselberg was possibly aware of one specific misuse of the PIC’s funds to benefit the Trump Organization. Racine wants to question Weisselberg about this, but three weeks ago Weisselberg received something of a reprieve, thanks to a delay in the case.

In January, Racine added a new allegation to the lawsuit against the Trump Organization and the PIC. In a filing, the AG charged that the Trump Organization booked a block of rooms for the inauguration at the Loews Madison Hotel in Washington costing $49,000 and that when Trump’s company didn’t pay up and the bill was transferred to a collection agency, the PIC used its nonprofit funds to cover the tab. The rooms, according to Racine, had been reserved by an assistant to Donald Trump Jr., and the contract was executed “on behalf of the Trump Organization” by Gentry Beach, a close friend of Trump Jr. (Beach has told the Washington Post he knew nothing about these rooms.)

Though this alleged $49,000 payment is a fraction of the $1 million or so in improper payments Racine says were made from the PIC to the Trump hotel, it is a serious charge. A nonprofit cannot use its funds to cover a private debt in this fashion. (The Donald J. Trump Foundation had a history of misusing its funds to benefit Trump and was forced to close.)

In a March filing asking the court to extend the deadline for discovery in the case, Racine noted that he wanted to depose Weisselberg about his review of the PIC’s financials and about this $49,000 payment. Racine stated, “Upon reviewing the PIC’s budget reports, Mr. Weisselberg would have seen that the PIC had funds leftover. The decision for the Trump Organization to punt its debt to the Loews Madison over to the PIC occurred in July 2017, after Mr. Weisselberg had reviewed the PIC’s financials. As a de facto representative of Donald Trump’s business interests during the relevant period, Mr. Weisselberg may have information relevant to why the PIC’s funds were used to pay a debt of the Trump family’s business.”

Racine has already questioned top Trump insiders during this lawsuit. In her deposition, Ivanka Trump said she knew nothing about these hotel rooms. Donald Trump Jr., when questioned by Racine’s attorneys, indicated he had been aware of this reservation, but he said he had not been involved with booking the rooms. Asked about his assistant’s participation in the matter, he said, “I guess she worked with Gentry [Beach] on those sort of things.” He said he had never spoken to anyone at the PIC about the $49,000 bill. (Both Ivanka Trump and Donald Trump Jr. provided testimony in their depositions on other matters that was contradicted by documents and other accounts.)

In her book, Melania and Me, Stephanie Winston Wolkoff, a top producer for the Trump inauguration and the lead cooperating witness in Racine’s case, suggested that the Trumps had tried to use the PIC as a personal piggy bank. At one point during the preparation for the inauguration, she recounts, Donald Trump’s personal secretary, Rhona Graff, sent her an invoice from an interior decorator who had been retained to redo the Oval Office (and who was subsequently fired). Graff asked if the bill could be covered by the PIC, though this work had nothing to do with the inauguration. “I said, ‘No!’ and she took care of it,” Winston Wolkoff writes. “It seemed like every person was trying to run off with money from the PIC.”

Now here’s where Weisselberg is fortunate—for the moment. Washington, DC, Superior Court Judge José López had scheduled a June 28 hearing to discuss unresolved discovery motions in the case. But when both sides asked for a postponement, pending López’s decision to render a summary judgment, the PIC’s lawyers asked for this postponement to cover the Weisselberg deposition. López agreed. The Weisselberg deposition—and any argument over whether it should transpire—was put on hold.

So Trump’s CFO has not yet been placed in the hot seat in the inauguration scandal case. According to one official involved with the lawsuit, both sides are now waiting for López to rule on summary motions. “We don’t have any sense of the potential timing,” this person notes. A spokesperson for the law firm representing Weisselberg says, “We have no comment at this time.” Meanwhile, Weisselberg, no doubt, has plenty to keep him busy with his own legal troubles in New York City.