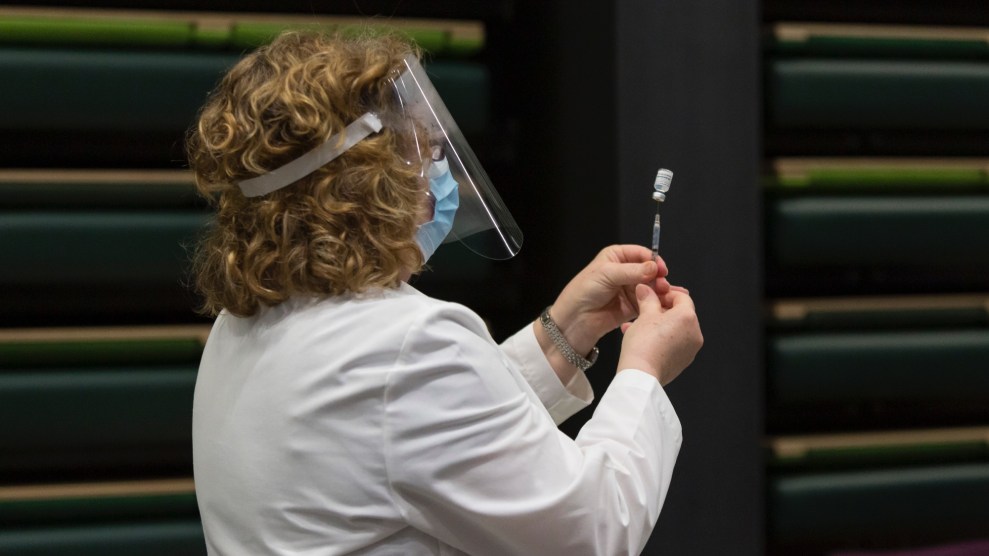 On July 17, 2020, more than four months into a global pandemic, Arkansas was averaging 708 new COVID-19 cases per day. One year and three FDA-approved vaccines later, Arkansas is now averaging 1,017 cases per day. The record numbers show what can happen when, despite the spread of a highly infectious new strain of the virus, most people fail to get fully vaccinated.

Only 44 percent of adults in the state are fully vaccinated, compared to 59 percent across the nation. The New York Times reports on what’s that meant for residents in one representative community:

The variant has highlighted a new divide in America, between communities with high vaccination rates, where it causes hardly a ripple, and those like [Mountain Home, Arkansas] that are undervaccinated, where it threatens to upend life all over again. Part of the country is breathing a sigh of relief; part is holding its breath.

While infections rose in more than half the nation’s counties last week, those with low vaccination rates were far more likely to see bigger jumps. Among the 25 counties with the sharpest increases in cases, all but one had vaccinated under 40 percent of residents, and 16 had vaccinated under 30 percent, a New York Times analysis found.

Case numbers are only one measure of the pandemic’s severity. More important are deaths and the number of people who need to be hospitalized. Both of those metrics are increasing across Arkansas as well. The Times reports that the Baxter Regional Medical Center, which is located in a county where less than a third of people are fully vaccinated, had one or two COVID-19 patients on a typical day in early June. As of Thursday, 22 of the 32 beds in the hospital’s overflow ward were occupied by people who’d tested positive. “It’s absolutely flooded,” Dr. Rebecca Martin, a pulmonologist at the hospital told a Times reporter.

Still, in a clear sign of the vaccines’ effectiveness, deaths remain well below the pre-vaccine peak. The state is averaging about six deaths per day, compared to more than 40 during periods of last winter. The fact that nearly 80 percent of Arkansas seniors have gotten at least one dose of a vaccine helps explain why.

It’s not just Arkansas that’s suffering from both widespread vaccine hesitancy and eye-popping case-counts. States like Missouri, where vaccinations also trail the national average, are seeing severe spikes in infections. Greene County, home to the city of Springfield, is now averaging more than 200 cases per day—nearly a tenfold increase from late April. Meanwhile, the nationwide pace of vaccination is lagging. One month ago, the United States was averaging 1.3 million doses per day. Today, the number is less than half of that.

Correction: This article initially misstated the county where Missouri’s capital is located.